A study has boosted the prospects of a cure for HIV. For the first time, results have shown that a drug can safely kick-start production of the dormant virus in patients, so that it might be detected and attacked more easily by the immune system.

The finding was announced today at the 19th annual Conference on Retroviruses and Opportunistic Infections in Seattle, Washington. But other studies released at the same event suggest that merely flushing the virus out of hiding is not enough to kill infected cells — and that a cure is some way off.

HIV integrates itself into cell genomes, causing the cells to make new copies of the virus when they transcribe their own DNA. But in some cells, HIV survives for decades in a resting, or latent, state without transcribing its genes to make new viruses. This renders the infected cells in the 'latent reservoir' invisible to the body’s immune defences and to antiretroviral treatment. 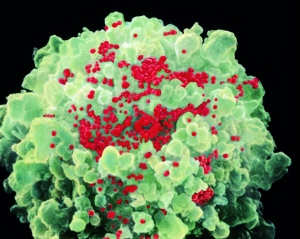 Studies had suggested that a drug called suberoylanilide hydroxamic acid (SAHA) could push the virus out of its slumber, but the approach had not been tested in people. So researchers led by David Margolis, a molecular virologist at the University of North Carolina at Chapel Hill, treated six people with a single dose of SAHA and tested its effect on CD4+ T cells — immune cells that are targeted for infection by HIV. The study found that SAHA did kick-start transcription of HIV in latently infected CD4+ T cells: researchers detected nearly 5 times as many HIV transcripts in the patients’ resting CD4+ T cells after treatment as before. There were no serious side effects.

“This study provides the first proof-of-concept demonstration of disruption of latency, which is a significant step towards eradication” of HIV from the body, says Margolis.

But Margolis and other researchers are cautious about what the study means in the quest for an HIV cure. Sharon Lewin, an infectious-disease doctor at Monash University in Melbourne, Australia, is also studying SAHA in patients; so far, 10 have taken the drug for two weeks without experiencing serious side effects. But, she says, no study has yet demonstrated that activating latent HIV leads to destruction of infected cells.

Margolis's study, says Lewin, “looked at a small number of patients, and although it is an important step to show that the drug has caused some alteration in viral production, we don’t yet know how that translates into getting rid of latent infected cells”.

At the Seattle conference, Liang Shan, a researcher at Johns Hopkins University in Baltimore, Maryland, presented the results of a study, published today in Immunity1, in which CD4+ T cells were taken from people with HIV and treated with SAHA in vitro. The cells did not die, even when combined with the patients' own 'killer' T cells, which are specialized to destroy virus-infected cells. However, when the killer T cells were first exposed to pieces of HIV, they did destroy the infected cells.

Siliciano is also co-leading a trial of disulfiram (Antabuse), which is used to deter alcoholics from drinking but has been shown to break HIV latency in cell studies. However, in a study of 14 patients, Siliciano and his team found that disulfiram led to neither a significant boost in viral production nor a depletion of the pool of latently infected T cells. Production of the virus did seem to increase at least temporarily in some patients within hours of taking the disulfiram, but it is unclear whether the drug really could have had such a rapid effect. The team will examine this question in six further trial participants, says Adam Spivak, an infectious-disease doctor at the University of Utah in Salt Lake City, who presented the results today at the conference.

Many HIV researchers believe that a combination of approaches will probably be required to eradicate HIV from the body.

“What we may need is a two-step approach in which one drug activates viral transcription, and a second sends the signal to the immune system to go after these cells,” says Spivak.

Margolis agrees that it will be some time before the field can answer questions such as which combinations of drugs will best activate latent HIV, whether those drugs will need to be used alongside other strategies to destroy latently infected cells, and how the drugs should be given to patients.

A variety of studies are examining methods for activating latent cells and are looking for better drugs to do so. Margolis has asked the US Food and Drug Administration to allow him to give patients multiple doses of SAHA to test whether that could give cells a harder push out of latency.

“There is a lot of interest and excitement in the field, but we’re at the very beginning,” he says.