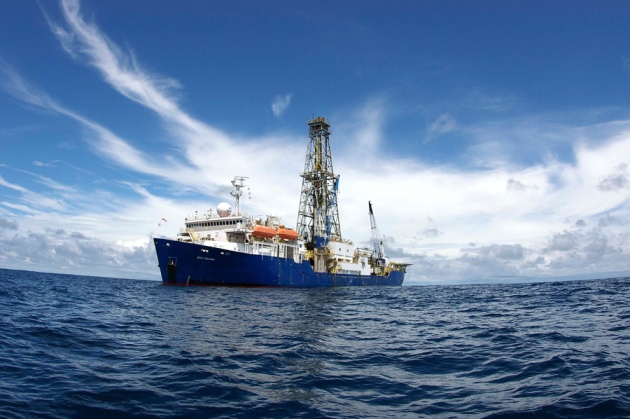 US research vessel the JOIDES Resolution on an expedition in the Gulf of Alaska.

This week’s arrival of US research vessel the JOIDES Resolution in Busan, South Korea, will mark an important milestone in scientific drilling. On 30 September, the Integrated Ocean Drilling Program (IODP) — the framework that has governed the extraction of geological cores from the sea floor for the past decade — will cease to exist. The next day, it will be reborn for another decade with a new name and blueprint, but the same old problem: how to pay for what is arguably the most successful international research collaboration ever.

The future of the JOIDES Resolution is particularly in doubt, which is a source of consternation for the geoscientists who depend on her services. For the past decade, the ship has been a workhorse of scientific ocean drilling, racking up 34 expeditions under the IODP. By contrast, vessels run by other countries have managed just 18 (see ‘Drilling down’).

But the ocean-sciences division of the US National Science Foundation (NSF), which funds the JOIDES Resolution from its headquarters in Arlington, Virginia, has run into a perfect storm of financial commitments. Rising costs for new facilities, coupled with double-digit budgetary cuts in core science programmes over the past two years, have led the NSF to consider slashing the money available for the vessel. 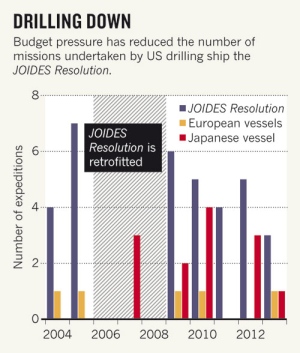 Rumours of the impending change have caused uproar among US geoscientists. They have sent a flood of letters to the NSF to highlight the valuable research conducted through ocean drilling ­— the only way to access continuous geological records older than about a million years. International collaborators such as Brazil and China that bring money to NSF coffers through membership fees now face the prospect of less time at sea.

The NSF’s head of ocean sciences, David Conover, points out that other programmes in his division are also suffering. “Everybody wishes we had more money to give,” he says. In November, he will appear before the National Science Board with options on how the JOIDES Resolution might operate after its contract with the NSF ends in September 2014. The board will vote to authorize some level of funding, which will dictate how much research the ship can do. It currently costs about US$65 million a year to conduct roughly four expeditions.

The United States has led the field of scientific ocean drilling since 1968, and today 26 countries share several expedition vessels under the IODP. The programme’s other flagship is Japan’s Chikyu, a $540-million vessel with ‘riser’ technology that allows it to drill much deeper than the JOIDES Resolution can.

Scientists aboard the Chikyu have drilled into the fault that caused the deadly 2011 earthquake near Tohoku, Japan, and have investigated a dangerous fault zone closer to Tokyo, to probe the mechanics of these killer hazards. But the Chikyu, like the JOIDES Resolution, has faced higher operating costs than expected; it spends about five months a year on science, and the rest of its time on mostly industry work, to help to pay the bills. At an April workshop in Tokyo, Chikyu scientists laid out an ambitious wish list of projects, from exploring an ancient Mediterranean dry period to drilling into Earth’s crust–mantle boundary, that would easily fill 12 months a year if Japan’s government could afford them.

Other parts of the IODP effort are run by the European Consortium for Ocean Research Drilling, which operates ‘mission-specific’ platforms — hiring ships that are matched to each expedition. The group has scrambled to find money to operate roughly one mission a year, and currently has a ship drilling in the Baltic Sea to explore past glacial cycles.

But these long-standing arrangements are being shuffled. In the rechristened, reorganized ‘International Ocean Discovery Program’, the United States, Japan and Europe will fund their own platforms directly instead of combining funds in a central pot of about $200 million. After years of courting, US officials have also brought in partners such as Brazil and China, which each pay $3 million annually to the US programme. Many had hoped that this influx of international funds might allow the JOIDES Resolution to sail more expeditions each year.

But the NSF’s budget woes make that look unlikely. Several years ago, the agency spent $115 million on refitting the JOIDES Resolution, but the ship has spent only seven to eight months a year on science since then. “If it can only continue at that level, I think the community would view the glass as half full rather than half empty,” says Keir Becker, a marine geologist at the University of Miami in Florida, and head of the new group that will coordinate activities among the US, Japan and Europe.

“If the United States falls over, then all these other countries are going to be left hanging,” says Mike Coffin, a marine geologist at the University of Tasmania in Hobart, Australia. “Everyone is extremely concerned about what the United States is doing.” (Australia has put in a five-year bid to continue participation in the programme.)

Conover brushes aside rumours that the United States is abandoning scientific drilling. “We are not terminating the programme,” he says. But he adds that the NSF’s ocean sciences division can only stretch so far. Its budget this year is almost $343 million, or $9 million less than the year before. Budget sequestration and other cutbacks have reduced its funding for core science by about 12% over two years.

At the same time, the 35-year-old JOIDES Resolution has only so much life left in it. “The community is waking up and seeing that we don’t have this tool forever,” says Bradford Clement, who oversees the ship’s science services at Texas A&M University in College Station. “There is a sense of urgency here.”