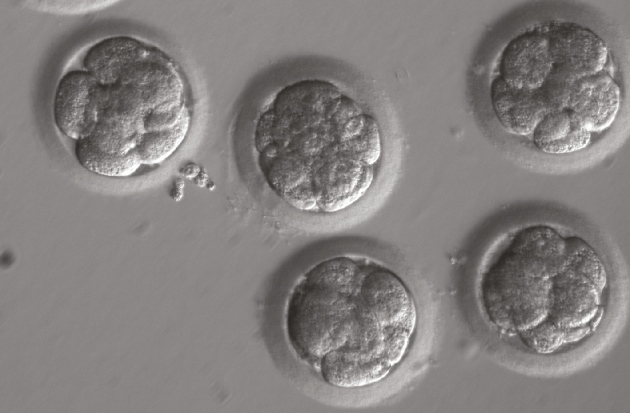 Eight-cell human embryos from an August study that reported success in using CRISPR to remove a deadly mutation.

Doubts have surfaced about a landmark paper claiming that human embryos were cleared of a deadly mutation using genome editing. In an article1 posted to the bioRxiv preprint server on 28 August, a team of prominent stem-cell scientists and geneticists question whether the mutation was actually fixed.

The 2 August Nature paper2, led by reproductive biologist Shoukhrat Mitalipov at the Oregon Health and Science University in Portland, described experiments in dozens of embryos to correct a mutation that causes a heart condition called hypertrophic cardiomyopathy.

In contrast to previous human-embryo editing studies, Mitalipov’s team reported a high success rate at correcting a disease-causing mutation in a gene. The team claimed that the CRISPR–Cas9 genome editing tool was able to replace a mutant version of the MYBPC3 gene carried by sperm with a normal copy from the egg cell, yielding an embryo with two normal copies. Mitalipov’s team also introduced a healthy version of the gene along with the CRISPR machinery, but they found that the corrected embryos had shunned it for the maternal version.

But there is reason to doubt whether this really occurred, reports a team led by Dieter Egli, a stem-cell scientist at Columbia University in New York City, and Maria Jasin, a developmental biologist at Memorial Sloan Kettering Cancer Center in New York City. George Church, a geneticist at Harvard Medical School in Boston, Massachusetts, is another co-author.

In their bioRxiv paper, Egli and Jasin and their co-authors say that there is no plausible biological mechanism to explain how a genetic mutation in sperm could be corrected based on the egg’s version of the gene. More likely, they say, Mitalipov’s team failed to actually fix the mutation and were misled into thinking they had by using an inadequate genetics assay. Egli and Jasin declined to comment because they say they have submitted their article to Nature.

“The critique levelled by Egli et al. offers no new results but instead relies on alternative explanations of our results based on pure speculation,” Mitalipov said in a statement.

But other scientists contacted by Nature's news team shared the Egli team's concerns. (Nature’s news team is editorially independent of its journal team.) Reproductive biologist Anthony Perry at the University of Bath, UK, says that after fertilization, the genomes of the egg and sperm reside at opposite ends of the egg cell, and each is enshrouded in a membrane for several hours. This fact, Perry says, would make it difficult for CRISPR-Cas9 to fix the sperm’s mutation based on the egg’s version of the gene, using a process called homologous recombination. “It’s very difficult to conceive how recombination can occur between parental genomes across these huge cellular distances,” he says.

Egli and Jasin raise that issue in their paper. They suggest that Mitalipov’s team was misled into believing that they had corrected the mutation by relying on a genetic assay that was unable to detect a far likelier outcome of the genome-editing experiment: that CRISPR had instead introduced a large deletion in the paternal gene that was not picked up by their genetic assay. The Cas9 enzyme breaks DNA strands, and cells can attempt to repair the damage by haphazardly stitching the genome together, often resulting in missing or extra DNA letters.

That explanation makes sense, says Gaétan Burgio, a geneticist at the Australian National University in Canberra. “In my view Egli et al. convincingly provided a series of compelling arguments explaining that the correction of the deleterious mutation by self repair is unlikely to have occurred.”

Another possibility Egli’s team raise is that the embryos were produced without a genetic contribution from sperm, a process known as parthenogenesis. Mitalipov’s team showed that the paternal genome was present in only 2 out of the 6 embryonic stem cell lines they made from gene-edited embryos.

Robin Lovell-Badge, a developmental biologist at the Francis Crick Institute in London, says that it is possible that there is a “novel or unsuspected” biological mechanism at work in the very early human embryo that could explain how Mitalipov’s team corrected the embryos’ genomes in the manner claimed. He would first like to hear from Mitalipov before passing judgement. “It simply says that we need to know more, not that the work is unimportant,” Lovell-Badge says of Egli and Jasin’s paper.

In the statement, Mitalipov’s said his team stands by their results. “We will respond to their critiques point by point in the form of a formal peer-reviewed response in a matter of weeks.”