Many single stars may have been born as two separate suns, which merged into one during the first million years of their life. That is the unexpected finding from a computer simulation of binary stars in a young star cluster.

Double stars are common. For example, Sirius, the brightest star visible in the night sky, consists of two stars that orbit each other every 50 years. 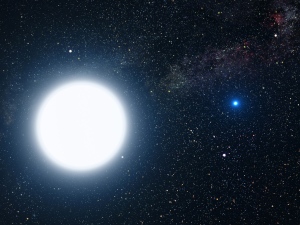 Short-period binary stars, such as the Sirius system, risk merging together in their early years of existence.

Studies of star-forming regions indicate that binary stars start off with a uniform distribution of orbital periods: the number of binaries younger than a few million years that orbit each other every 1–10 years, 10–100 years, 100–1,000 years, and so on, is about the same

Older binaries show a different pattern. The most common orbital period for double stars outside of star-forming regions is about 200 years, and both shorter and longer periods are rarer.

The scarcity of binaries with longer orbital periods is easy to explain: to have a long orbital period, the stars must be quite far apart. For two stars with a total mass adding up to that of the Sun, a 200-year orbital period would put them about as far from each other as the Sun is from Neptune or Pluto. Stars at much greater distances feel little of each other's gravity, so the gravitational tug of a passing star can disrupt the system and break it apart.

But where did the short-period binaries go? In a paper in Astronomy and Astrophysics1, three astronomers in Germany report how they simulated a star cluster resembling that in the Orion Nebula, the best-known stellar nursery. Their model assumes that as two stars close together in a binary system whirl around each other, they interact with the gas in the cluster. The interactions can modify the stars' orbits, causing them to spiral towards each other until they merge and become a single star.

"It was quite astonishing," says Thomas Kaczmarek, an astronomer at the Max Planck Institute for Radio Astronomy in Bonn, Germany, and a co-author of the paper. "We just took the parameters that we needed from this cluster, and what came out is that we almost perfectly get this period distribution observed in the field."

Steven Stahler, an astronomer at the University of California, Berkeley, who studies star formation, approves of the work. "It's plausible," he says, but adds that proving the idea correct will be difficult. The same gas and dust that cause the close-in binaries to merge also prevent their visible light from reaching Earth. Astronomers must conduct observations using infrared radiation, which penetrates the dust, but often requires space-based observatories to detect.

In one unique case, astronomers have actually watched two stars in the constellation Scorpius spiral together2. The merger sparked a bright flare of light called a red nova, and a similar eruption inside a young star cluster could show that young binaries do indeed merge. However, the Scorpius binary didn't belong to a star cluster, and Stahler thinks that a merger inside a gas-filled cluster might be too gentle to unleash a nova.

Could the Sun have been born as two separate stars that later merged? "It could have happened, but I think it would be a bit far-fetched," says Susanne Pfalzner, an astronomer at the Max Planck Institute for Radio Astronomy and a co-author of the latest paper. She suspects that a merger would have disturbed the newborn Sun's planet-forming disc, preventing the birth of rocky worlds including Earth.