Following the success of antiretroviral therapy for HIV, some researchers are now focusing their attention on a loftier goal — a cure. That means targeting viral reservoirs, primarily the long-lived cells of the immune system in which the virus lies dormant. Eliminating these reservoirs isn’t easy, but recent research offers glimmers of hope that it may one day be possible.

The strongest proof that HIV can be cured comes from the case of Timothy Brown, who was infected with HIV until he received a stem-cell transplant in 2007 to treat leukaemia1. He has remained free of HIV since then. Brown’s transplant helped cure his HIV, in part, because the donor's stem cells lacked a key receptor that the virus needs to enter cells. 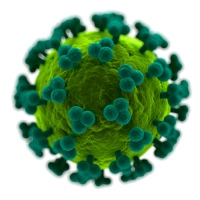 Particles of HIV that are invisible to the immune system must be flushed out before the disease can be said to be cured.

But at this week's XIX International AIDS Conference in Washington DC, Timothy Henrich, an infectious-disease physician at the Brigham and Women’s Hospital in Boston, Massachusetts, reported a study of two HIV-infected men who received transplants of stem cells that did have the HIV receptor. Since they received a milder dose of chemotherapy than Brown prior to their transplants, they were able to continue taking antiretrovirals throughout the procedure. The transplants did not immediately eliminate the men’s infected immune cells, but roughly ten months later, the men had no evidence of HIV in their blood.

After their transplants, both men developed graft-versus-host disease, in which donor immune cells attack the transplant patient’s cells. Henrich and his colleagues speculate that the antiretroviral drugs protected the donor cells from infection with HIV. These healthy donor cells then destroyed the HIV-infected cells, leaving the men free of virus.

“Theoretically, they could be cured because the immune system was rebuilt under the coverage of antiviral therapy,” says Steven Deeks, an HIV researcher at the University of California, San Francisco, who wasn’t involved in the research. The ultimate test, however, will be to see whether the men remain HIV-free when they stop taking antiretroviral medicines. Henrich is working with the patients, their physicians and an ethics board to determine whether that is feasible.

Flushing out the virus

But stem cell transplants are too risky to be used on people who don’t have a life-threatening illness. “This is not scalable or affordable or reasonable or ethical in anyone else,” Deeks says.

A more palatable tactic would be to purge the virus from its main hiding spot — the long-lived memory cells of the immune system, called CD4+ memory T cells. A paper published this week in Nature provides the first evidence that this may be possible in humans2 (see 'Drug brings HIV out of hiding'). David Margolis, an HIV expert at the University of North Carolina’s Center for Infectious Diseases in Chapel Hill, and his colleagues administered a cancer drug called vorinostat (suberoylanilide hydroxamic acid) to eight people in an attempt to coax dormant HIV out of hiding.

A single dose of the medicine produced a 4.8-fold increase in HIV RNA expression. The hope is that this results in HIV particles being made and released, so that they are visible to the patient's immune system again. However, it is still unclear to scientists whether this increased expression will lead to the destruction of HIV-infected cells and shrink the viral reservoir. “But it's a positive signal,” says Nicolas Chomont, an HIV researcher at the Vaccine & Gene Therapy Institute of Florida in Port St Lucie.

But eliminating the viral reservoir might not be necessary to acheive something akin to a cure. In 2010, French researchers reported that they had identified a small group of patients who began antiretroviral therapy soon after HIV infection, then stopped taking the drugs after several years of treatment3. Since stopping treatment, these individuals have been able to control the virus naturally, for nearly seven years.

Unlike a group of HIV-infected patients known as elite controllers, who have specific genetic traits that enable them to control the virus, the group studied by the French team, known as the Visconti cohort, doesn’t seem to have a protective genetic component. At the Washington conference, researchers presented an in-depth look at the viral reservoirs of 11 people in this group. They report that the virus seems to reside disproportionately in shorter-lived immune cells that die off faster. Asier Sáez-Cirión, an HIV researcher at the Institut Pasteur in Paris, who is involved in the study, says that this may explain why the reservoir has shrunk over time in four of the patients.

“I think [these individuals] are fascinating,” Chomont says. “They have something that makes them able to control the virus.” The trick will be to identify what that is, he adds, and then find a way to reproduce it.

Although questions remain over how to tackle viral reservoirs, many HIV researchers are hopeful. “This is very similar to the dawn of the antiretroviral era in the mid-80s,” Deeks says. “Every time we turn around, there's something that we learn that opens up new avenues and makes people optimistic.”