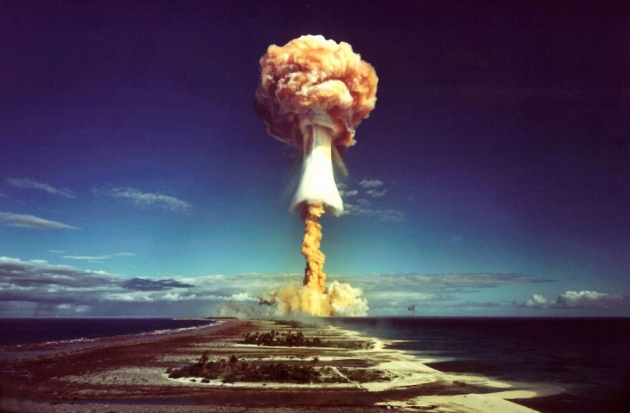 Threats about the use of nuclear weapons have worried scientists.

The Bulletin of the Atomic Scientists has moved the hands of its symbolic Doomsday Clock 30 seconds closer to midnight — signalling the greatest threat of apocalypse since 1953.

Back then, Russia and the United States had detonated hydrogen bombs in tests within nine months of each other, intensifying the nuclear arms race and escalating the cold war. Now, governments’ “cavalier and reckless” talk about nuclear weapons and a growing disregard for scientific expertise have pushed the clock hands to 2.5 minutes to midnight, the Bulletin said.

The group’s executive director and several prominent scientists announced the update at a press conference in Washington DC on 26 January.

“Climate change should not be a partisan issue,” said Bulletin board member David Titley, former chief oceanographer for the US Navy and a meteorologist at Pennsylvania State University in University Park. “The well established physics of the Earth’s carbon cycle is neither liberal nor conservative in character.”

Titley called on new US President Donald Trump to state “unequivocally” that climate change is real and caused by humans. “There are no ‘alternative facts’ here,” Titley said, referencing the language used by several Trump spokespeople earlier in the week.

The Bulletin’s board of directors is especially concerned about language that Trump and Russian President Vladimir Putin have used to talk about climate change, nuclear weapons and the idea of facts. “This is the first time the words and stated policies of one or two people placed in high positions have so impacted our perception of the existential threats we believe the world faces,” said Lawrence Krauss, a Bulletin board member and a cosmologist at Arizona State University in Tempe.

If Trump and Putin can choose to act together instead of behaving like “petulant children”, said Krauss, such threats could be neutralized.

The Doomsday Clock’s hands have historically moved in full-minute increments, but the latest update saw them move forward by 30 seconds. That decision reflects a feeling among the Bulletin board members that “words matter”, said the group's executive director, Rachel Bronson.

Michael Oppenheimer, a geoscientist and international climate-policy specialist at Princeton University in New Jersey, agrees with that decision. “We don’t know yet if [Trump's] words foreshadow a significant change in policy,” Oppenheimer said. “But based on what we do know, there’s a serious risk that things could go very badly on the climate front.”

If Trump follows through on his pledge to withdraw the United States from the Paris climate agreement, that would slow the world’s progress towards cutting greenhouse-gas emissions, Oppenheimer adds.

The Bulletin of the Atomic Scientists created the Doomsday Clock in 1947, in response to the 1945 detonation of nuclear bombs at Hiroshima and Nagasaki in Japan. At first, the clock’s hands sat at seven minutes to midnight. In the 70 years since then, the clock has never strayed further from destruction than 17 minutes to midnight, its position when the cold war ended in 1991.

The current setting is not the closest that the clock has come to midnight, but Krauss said that the challenges facing the world today — such as fake news that threatens to undermine democracy and cybersecurity breaches — are unprecedented.

“The future of the clock, and our future, is in your hands,” he said.

Updated with comments from Michael Oppenheimer.