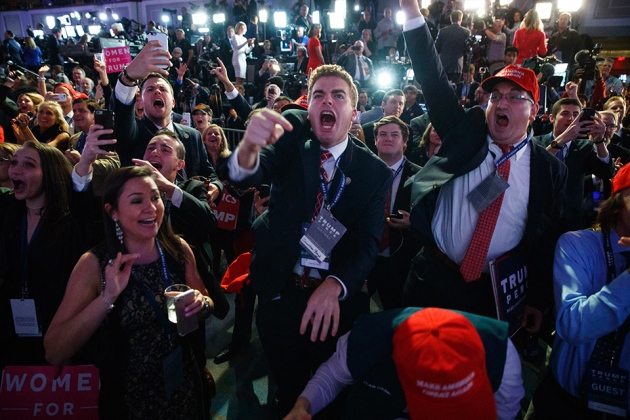 Republican businessman and reality-television star Donald Trump will be the United States’ next president. Although science played only a bit part in this year’s dramatic, hard-fought campaign, many researchers expressed fear and disbelief as Trump defeated former secretary of state Hillary Clinton on 8 November.

“Trump will be the first anti-science president we have ever had,” says Michael Lubell, director of public affairs for the American Physical Society in Washington DC. “The consequences are going to be very, very severe.”

Trump has questioned the science underlying climate change — at one point suggesting that it was a Chinese hoax — and pledged to pull the United States out of the Paris climate agreement.

Although he has offered few details on policies for biomedical research, Trump said last year that he has heard “terrible” things about the US National Institutes of Health; he has also derided NASA as a “logistics agency for low-Earth orbit activity“, and said he would expand the role of the commercial space industry in the US space programme.

Trump’s hard-line positions on immigration — including a pledge to bar Muslims from entering the United States, and a plan to build a wall along the US border with Mexico — have worried research advocates who say such stances could dissuade talented foreign scientists from working or studying at US institutions.

“I think at the very least it would put a chilling effect on the interest of scientists from other countries in coming here,” says Kevin Wilson, director of public policy and media relations at the American Society for Cell Biology in Bethesda, Maryland.

The scientists who support Donald Trump

Some researchers are already thinking about leaving the United States in the wake of the election. “As a Canadian working at a US university, a move back to Canada will be something I'll be looking into,” tweeted Murray Rudd, who studies environmental economics and policy at Emory University in Atlanta, Georgia. (Read more reaction from scientists.)

Trump surpassed 270 electoral votes, the margin needed for victory, just before 3 a.m. on 9 November in New York City, where he was watching the election results unfold. Clinton — who held a slim lead in polls leading up to election day — scored strong support among women, minorities and college graduates, but that wasn’t enough to overcome Trump’s unexpectedly strong performance.

Republicans also swept Congress, retaining control of the House of Representatives and the Senate. That will make it easier for Trump to push through his policy priorities and nominees for key positions — including the leaders of science agencies such as NASA and the National Oceanic and Atmospheric Administration, and for a current vacancy on the Supreme Court.

"It's going to be critically important for researchers to stand up for science,” says Jennifer Zeitzer, director of legislative relations at the Federation of American Societies for Experimental Biology in Bethesda, Maryland. That means making sure that the Trump administration understands how federally funded research benefits the country, Zeitzer says.

Many scientists reacting to the election results on social media said that the possibility of funding cuts is a major worry. “I do breast cancer research for my PhD,” tweeted Sarah Hengel, a graduate student at the University of Iowa in Iowa City. “Scared not only for my future but for the future of research and next years @NIH budget.”

“This is terrifying for science, research, education, and the future of our planet,” tweeted María Escudero Escribano, a postdoc studying electrochemistry and and sustainable energy conversation at Stanford University in California. “I guess it's time for me to go back to Europe.”

The Supreme Court vacancy could put the fate of one major plank of US President Barack Obama’s climate-change strategy in Trump’s hands. The court is reviewing a regulation to curb emissions from existing power plants. Republicans have blocked Obama’s attempt to nominate a justice to fill the court vacancy, but Trump should be able to quickly fill the position. His nominee, not yet named, could cast the deciding vote in the climate case.

Fulfilling his pledge to exit the Paris agreement could take longer; legally, he would not be able to do so for four years. But Trump's election could factor into climate negotiations currently under way in Marrakesh, Morocco, where countries are hashing out how they will implement the Paris agreement. The United States is the world’s second-largest emitter, and Obama played a key part in crafting the Paris accord.

David Victor, a political scientist at the University of California, San Diego, says that the international community is likely to keep soldiering on with the agreement. One possibility, he says, is that China could emerge as the global leader on climate change.

Victor also says that Trump’s election will have enormous implications for international relations generally. “It’s going to badly tarnish the image of the United States,” he says. “Roughly half of the population has voted for somebody who by almost any measure is unfit to serve as president.”