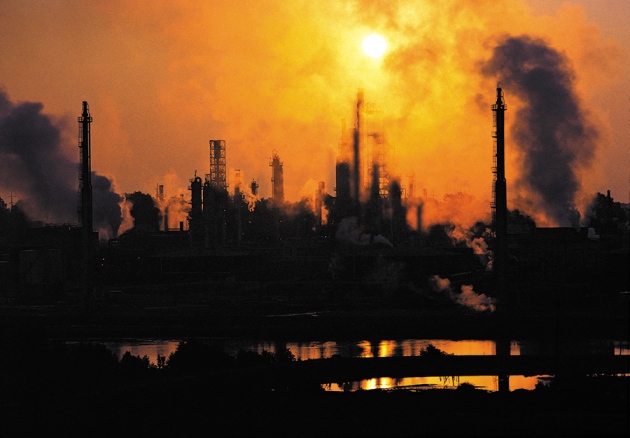 An oil refinery in San Francisco, California, a US state that has its own carbon market.

Carbon trading programmes are proliferating. These allow companies to buy and sell the right to emit carbon dioxide. The European Union's Emissions Trading System (EU-ETS) is the largest, covering 11,000 emitters across all EU member states, as well as Norway, Iceland and Liechtenstein. California and Quebec share a market, which Ontario, Manitoba and provinces in Brazil and Mexico plan to join. China is due to launch its national cap-and-trade system later this year, comprising 7,000 emitters. Around 100 nations have stated that they are planning or considering carbon pricing to reach their emissions-reduction goals in the 2015 Paris agreement on climate change1. These pricing plans include carbon taxes and trading schemes (see ‘Carbon pricing: A quick guide’).

Many policymakers argue that the next logical step is to combine cap-and-trade efforts into one global carbon market. According to prevailing economic theory, linking markets together should promote trading, smooth financial flows and lower the overall cost of reducing emissions. A global price on carbon emissions would emerge without the need for long and fractious diplomatic negotiations.

But reality is more complicated. Initial attempts to join up trading schemes in Europe and in California and Quebec have led to price crashes and volatility, not stability. It is becoming clear that cap and trade works only under special circumstances — when one entity controls the market and parallel initiatives do not undermine it.

Linked carbon markets are difficult to manage when many regulatory authorities compete. Interactions with other climate policies trigger unintended outcomes. Policymakers find it hard to keep prices at the 'right' level — neither so high that a carbon market becomes politically unacceptable, nor so low that it fails to change behaviour. California's case shows that lawmakers can be tempted to use regulatory loopholes to drive down prices and weaken the market's effectiveness. Such problems will only worsen when more markets are linked up.

So, policymakers should keep it simple. A truly global carbon market would need a central carbon bank to manage allowances and prices. But that approach seems unlikely in today's political climate. In the absence of such a body, national and regional carbon markets should maximize their autonomy, manage their own prices and regularly ratchet down the caps on total emissions. Prices must be kept high and regulatory loopholes avoided for net emissions to fall.

Proponents of carbon markets often trumpet the success of the US Acid Rain Program. In 1990, the Environmental Protection Agency (EPA) created a nationwide market for sulfur dioxide (SO2). The agency capped the total amount of the gas that could be emitted nationally, and gave allowances to power plants on the basis of their past SO2 emissions. The plants could then trade these allowances.

Between 1990 and 2004, the scheme reduced SO2 by almost 6 million tonnes (roughly 35%), even as US electricity generation increased by 25%. By 2010, SO2 emissions had halved again to 5 million tonnes2. Compliance was close to 100%. The health benefits alone were estimated to exceed US$50 billion a year — a bargain, given that the programme's annual administration costs were about $0.5 billion3.

Enthusiasm grew for cap-and-trade mechanisms to manage other pollutants. During the Kyoto Protocol climate negotiations in the late 1990s and early 2000s, an international carbon market seemed logical. The protocol created the Clean Development Mechanism (CDM), which in 2005 became the first global exchange for carbon offsets, allowing countries to receive credit for financing emissions-reduction activities outside their borders. The same year, the EU created its cap-and-trade programme, the EU-ETS, which it linked immediately to the CDM. This allowed companies to pay for offsets abroad through the CDM as a way of meeting their EU emissions quotas.

But the Acid Rain Program was a special case. It ran under the sole authority of the EPA. For power plants that did not comply, there were onerous financial penalties of $2,000 per tonne of emitted SO2 (compared to €100 (US$106) per tonne of CO2 for the EU-ETS). Initially, the EPA programme was a closed regulatory system. Policymakers deliberately avoided adding other policies such as technology requirements or performance standards to reduce SO2 emissions. By contrast, carbon markets are influenced by other policies on climate change and energy.

The second phase of the Acid Rain Program shows how problems arise when a closed regulatory system is opened up. In 2005, the EPA created the Clean Air Interstate Rule to target nitrogen oxides, too. This tightened the cap on SO2 emissions, widened the programme to cover more US states and made trading optional.

The changes prompted a spike in prices, and a successful lawsuit was brought against the EPA by a number of states arguing that the changed rules were too lax. This gave rise to new regulations. The market became volatile and, eventually, irrelevant. Now, SO2 trades at a few cents per tonne. Emissions continue to fall, and are down more than sevenfold from 1990 levels. But other factors played a part, including the rise in supplies of natural gas and low-sulfur coal.

Attempts to join up carbon markets have faced similar challenges. There are two notable examples: the EU-ETS link with the Kyoto Protocol's CDM, and California and Quebec's shared market.

In mid-2008, EU-ETS carbon prices plummeted from roughly €25 to less than €10 per tonne of CO2. They have yet to recover — carbon now trades at around €5 per tonne. The main reason is too many allowances. After the financial crisis, falling industrial output coupled with changing environmental policies lowered emissions across Europe, leaving power plants with allowances to spare. Joining the CDM added more emissions credits to a system that was already awash with them4.

The European Commission has introduced reforms to reduce the glut. In 2011, it announced that certain CDM offset credits would be barred from the EU-ETS after 2013. The most significant was a credit for destruction of the potent greenhouse gas HFC-23, a by-product in the manufacture of the refrigerant HCFC-22. The CDM had already unwittingly created a perverse incentive5: companies had been generating more HCFC-22 to capture offset credits from destroying HFC-23. Worse, when these credits were banned, they flooded the market as firms rushed to sell them before they became worthless. Businesses banked their other allowances, lowering demand further.

The commission has postponed the auctioning of some other allowances since 2014. And in 2015, it established the Market Stability Reserve, an institution that will manage supply problems from 2019. Yet European carbon prices remain low and oversupply is unsolved. On 15 February, the European Parliament voted to decrease the cap on emissions by 2.2% per year from 2021 (the current annual decrease is 1.74%). The reforms have been criticized by non-governmental organizations, such as Climate Action Network Europe in Brussels, as not going far enough. 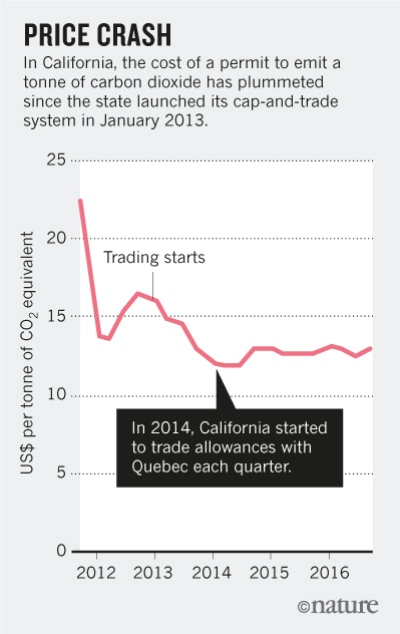 California is also experiencing low carbon prices and low demand for credits (see 'Price crash'). The scheme launched in 2013 as part of the state's suite of policies for achieving its ambitious emissions-reduction goals6. It was an open regulatory system from the start, and interacted with other climate-related policies. Prices are higher than in Europe only because there is a price floor below which carbon allowances cannot be sold (currently around $13 per tonne). In an auction in February 2017, only 18% of available allowances were sold. The two preceding auctions in 2016 also failed to sell everything.

Since 2014, California and Quebec have pooled their allowances through joint quarterly auctions, complicating regulatory arrangements further. California's carbon-trading woes have spread to Canada. Despite the uncertain future of the Californian cap-and-trade scheme7, policymakers continue to pursue links. Ontario's market, launched on 1 January 2017, intends to link with that of California and Quebec, although no date has been set. The provinces of Acre in Brazil and Chiapas in Mexico plan to join during or after 2018.

At this point, carbon trading is more a political fix than an effective way to mitigate climate change. Without stringent caps and careful management, cap-and-trade systems have scant effect on net emissions. For example, Californian law allows electricity providers to meet the emissions cap by buying energy from sources outside the state. Instead of buying dirty energy, say, from a high-emissions Nevada coal plant, providers can swap to cleaner sources (an Oregon natural-gas plant, for instance). Although the Californian utility is emitting less by using energy from a cleaner source, a non-Californian utility will still buy the dirty energy. The result of this 'resource shuffling' is fewer emissions in California, but no net change in US or global emissions9.

A central carbon bank would solve many of these problems. Although trading jurisdictions would set caps, the bank would intervene to manage the supply of allowances to prevent price volatility. Politically, creating a new international institution — and insulating it from political influence — is a tall order. In the meantime, I offer three suggestions.

First, policymakers should limit links to other markets. China's national market, which it plans to launch this year, will be the largest in existence. It has made the wise decision to remain independent, providing leeway to fix the problems that will inevitably arise. It should postpone any other linkages being considered. Similarly, policymakers should reject offsets from other jurisdictions. The EU-ETS should expand its list of barred credits to include more, or even all, CDM projects. New Zealand has done so: after linking to the CDM in 2008, it stopped accepting its credits in 2015.

Second, policies should be designed to avoid over-allocation and ensure rising prices. When burning fossil fuels becomes too expensive, firms will develop alternative energy sources. Regulators should establish institutions to insulate the allocation process from political pressure and to assess environmental and economic performance. The forthcoming Market Stability Reserve for the EU-ETS will perform some of these functions; governed by detailed rules, it leaves little opportunity for member-state influence. Other jurisdictions should follow suit.

Third, policymakers should eliminate loopholes that limit the environmental effectiveness of cap and trade. California's initial regulations did not permit resource shuffling, because only net reductions in emissions counted towards compliance. These rules were rewritten under pressure from utility companies, which were granted exemptions10.

The worst possible outcome of linked markets is a set of policies that appear to address climate change but allow emissions to continue to rise.