Bottlenose dolphins become quite excited when a scientist plays back the signature whistles of other dolphins they know — even if they haven't seen their friends in decades.

Allie and Bailey knew each other when they both lived in Florida. More than 20 years later, Allie lives near Chicago and Bailey lives in Bermuda, but Allie’s name still rings a bell for Bailey. That would not be breaking news, except that Allie and Bailey are not people: they are dolphins.

Bailey’s recollection of Allie’s name — or more precisely, of her 'signature whistle', which functions as a name among dolphins — is the most durable social memory ever recorded for a non-human. Yet it is only one of many data points in a study that found that it is the rule, not the exception, for bottlenose dolphins (Tursiops truncatus) to recognize whistles from their distant past.

“We can’t tell yet what the upper limit is time-wise, or even if there is one,” says Jason Bruck, a biologist at the University of Chicago who published the results today in Proceedings of the Royal Society B1. “We just know it’s at least 20 years.”

Between the ages of about 4 months and a year, every bottlenose dolphin settles on a whistle of its own that stays the same for the rest of the dolphin's life. In another recent study, published last month in Proceedings of the National Academy of Sciences2, Stephanie King and Vincent Janik, two marine-mammal biologists at the University of St Andrews, UK, have shown that dolphins use these whistles in the same way as humans use names: they voice their own whistles to identify themselves to others, and they mimic others’ whistles to call to them. 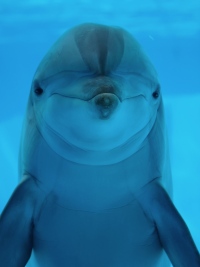 A name to remember

For his study, Bruck worked with more than 50 dolphins from six breeding facilities that rotate animals among themselves — and which, fortuitously, have records of who lived with whom, and when.

He then recorded each dolphin's whistle and played it back to its old friends using an underwater speaker, alternating it with the sounds of unfamiliar dolphins as controls. But before each test whistle, he habituated the dolphins to unfamiliar whistles, to eliminate the possibility that they were simply responding to the novelty of hearing whistles coming from a speaker.

The whistle of a former companion was more likely to make the subject take notice — perhaps bumping into the speaker on purpose or whistling at it, trying to make it whistle back. And that was true no matter how long a pair had been separated.

Researchers expected dolphins to have long-term memory, but perhaps not that long-term. “I would not have been surprised if they started to forget the whistles of some pool mates 5–10 years after they were separated,” says Peter Tyack, also a marine-mammal biologist at St Andrews.

It is not clear how strong a parallel can be drawn with human social recognition. “Does the dolphin pay attention to the whistle because it is a familiar sound that was once part of, or perhaps still is part of, its vocal repertoire?” asks King. “Or does the whistle evoke a mental representation of the absent animal in the dolphin’s mind?”

Bruck does not have the answer yet, but he already has some clues that dolphins remember the tank mate as well as the sound. In tests using the signature whistles of extremely dominant males, for example, females responded with exceptional interest. “And there was a lot of posturing from the males,” says Bruck. “Some young ones would just go ballistic.”