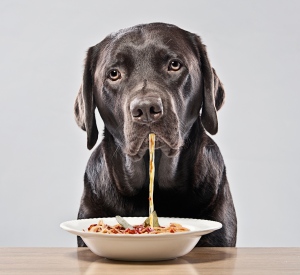 No need to push back on your favorite pet's appetite for carbs: dogs appear to have evolved to digest starches.

Dogs now have an excuse for waiting under the dinner table: domestication may have adapted them to thrive on the starch-filled foods that their owners eat.

A study published in Nature1 today finds that dogs possess genes for digesting starches, setting them apart from their carnivore cousins — wolves.

The authors say the results support the contentious idea that dogs became domesticated by lingering around human settlements. “While it’s possible that humans might have gone out to take wolf pups and domesticated them, it may have been more attractive for dogs to start eating from the scrap heaps as modern agriculture started,” says Kerstin Lindblad-Toh, a geneticist at Uppsala University in Sweden, who led the work.

Canine-domestication researchers agree that all dogs, from beagles to border collies, are the smaller, more sociable and less aggressive descendants of wolves. But neither the time nor the location of the first domestication is known: fossils place the earliest dogs anywhere from 33,000 years ago in Siberia to 11,000 years ago in Israel, whereas DNA studies of modern dogs put domestication at least 10,000 years ago, and in either Southeast Asia or the Middle East. Many researchers believe that dogs were domesticated more than once, and that even after domestication, they occasionally interbred with wild wolves.

Lindblad-Toh and her team catalogued the genetic changes involved in domestication by looking for differences between the genomes of 12 wolves and 60 dogs from 14 different breeds. Their search identified 36 regions of the genome that set dogs apart from wolves — but are not responsible for variation between dog breeds.

Nineteen of those regions contained genes with a role in brain development or function. These genes, says Lindblad-Toh, may explain why dogs are so much more friendly than wolves. Surprisingly, the team also found ten genes that help dogs to digest starches and break down fats. Lab work suggested that changes in three of those genes make dogs better than meat-eating wolves at splitting starches into sugars and then absorbing those sugars.

Kerstin Lindblad-Toh thinks that the evolution of dogs has been shaped by their dinner. She spoke to Ewen Callaway.

Most humans have also evolved to more easily digest starches2. Lindblad-Toh suggests that the rise of farming, beginning around 10,000 years ago in the Middle East, led to the adaptations in both species. “This is a striking sign of parallel evolution,” she says. “It really shows how dogs and humans have evolved together to be able to eat starch.”

However, Greger Larson, an evolutionary archaeologist at Durham University, UK, very much doubts that genes involved in digesting starches catalysed domestication, pointing out that the earliest dog fossils predate the dawn of agriculture. His team plans to analyse DNA preserved in dog fossils, to discover when the genetic variations involved in domestication first emerged.

Robert Wayne, a geneticist at the University of California, Los Angeles, who is also studying ancient dog genomes, says that starch metabolism could have been an important adaptation for dogs. However, he thinks that such traits probably developed after behavioural changes that emerged when humans first took dogs in, back when most of our forebears still hunted large game.

Nevertheless, the study adds to evidence that dogs should not eat the same food as wolves, says Wayne, who points out that dog food is rich in carbohydrates and low in protein compared with plain meat. “Every day I get an email from a dog owner who asks, should they feed their dog like a wolf," says Wayne. "I think this paper answers that question: no.”