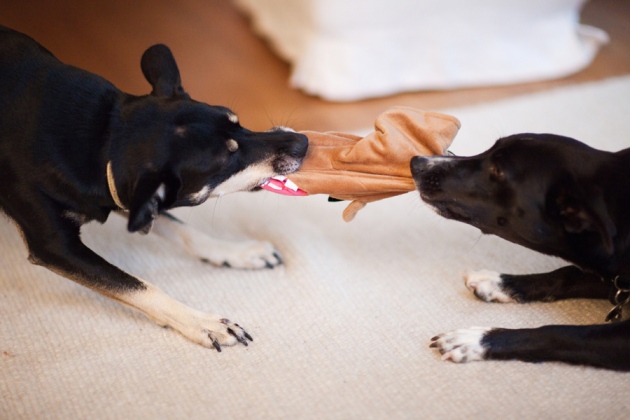 The issue of when or where canines were domesticated has geneticists in a tug of war.

Scientists investigating the transformation of wolves into dogs are behaving a bit like the animals they study, as disputes roil among those using genetics to understand dog domestication.

In recent months, three international teams have published papers comparing the genomes of dogs and wolves. On some matters — such as the types of genetic changes that make the two differ — the researchers are more or less in agreement. Yet the teams have all arrived at wildly different conclusions about the timing, location and basis for the reinvention of ferocious wolves as placid pooches. “It’s a sexy field,” says Greger Larson, an archaeogeneticist at the University of Durham, UK. He has won a £950,000 (US$1.5-million) grant to study dog domestication starting in October. “You’ve got a lot of big personalities, a lot of money, and people who want to get their Nature paper first.”

In January, Erik Axelsson and Kerstin Lindblad-Toh, geneticists at Uppsala University in Sweden, and their colleagues reported in Nature1 that genes involved in the breaking down of starch seemed to set domestic dogs apart from wild wolves. In the paper and in media interviews, the researchers argued that dog domestication was catalysed by the dawn of agriculture around 10,000 years ago in the Middle East, as wolves began to loiter around human settlements and rubbish heaps (see Nature http://doi.org/mv4; 2013).

But Larson, who has worked with Lindblad-Toh on other projects, says that their claim is dubious. He notes that bones that look similar to those of domestic dogs predate the Neolithic revolution by at least several thousand years, so domestication must have occurred before then. “Why waste space [in a paper] saying something that is patently untrue?” he says.

Axelsson concedes that the changes in starch digestion in dogs could have occurred after they were domesticated. But he also counters that the Neolithic era lasted for thousands of years, and that dogs may have been domesticated during the earliest steps towards agrarian life — when human hunter-gatherers settled down and began eating more starch-rich wild plants.

A second study, published last month in Nature Communications2, argues that dogs were domesticated 32,000 years ago when they began scavenging with Palaeolithic humans in southern China. A team led by Ya-ping Zhang at the Kunming Institute of Zoology in China drew that conclusion from studying the whole genomes of several grey wolves, modern European dog breeds and indigenous Chinese dogs.

But Larson says that there is no evidence to suggest that wolves ever lived in southern China, “so how do you domesticate a wolf if there aren’t any?” And Jean-Denis Vigne, an archaeozoologist at the National Museum of Natural History in Paris, agrees, noting that in earlier work, Zhang’s team “completely ignored what has been published, even in the frame of genetics”.

Peter Savolainen, a geneticist at the KTH Royal Institute of Technology in Solna, Sweden, who co-authored the Nature Communications paper, argues that Chinese scientific literature suggests that wolves did once live south of China’s Yangtze River, but have since become extinct. But he acknowledges that the date that his team reported — like all molecular dating efforts — relies on several assumptions, such as the number of genetic mutations that develop in each generation.

A third paper3 argues that a more probable date for domestication was 11,000–16,000 years ago. Posted to the arXiv preprint server on 31 May, the study, like Zhang’s, compares the whole genomes of wolves and dogs. But the paper paints an even murkier picture, suggesting that wolves and the ancestors of modern dogs continued to breed together long after domestication, and that the wolf population that gave rise to dogs is extinct.

The authors, a team of geneticists co-led by John Novembre at the University of Chicago in Illinois, declined to comment on their work because it has not yet been published in a journal. But Larson and others say that the paper makes a strong point — that studying the genomes of long-dead dogs and wolves is the only way to settle the dispute. At least three other teams in the United States and several others in Europe are racing to sequence ancient dog and wolf genomes, but researchers say that many specimens will be needed to build a clearer picture of domestication. Still, “we’re not in a position to be picky”, says Adam Boyko, a dog geneticist at Cornell University in Ithaca, New York, who was involved in the arXiv paper3. “We’re sort of going to be limited to which samples we can get DNA out of.”

The move to look at ancient DNA could make the small field of dog genetics even pricklier, because archaeological bone samples are so precious. Novembre says that he finds the field more fractious than human genetics, and says that his experience has given him pause about future canine work. “It’s really intense in the dog world,” he says. But Boyko, who also collaborates with the Chinese group, says that although the field is competitive, it remains collegial. “At the end of the day, we sit back and enjoy a beer together when we see each other.”