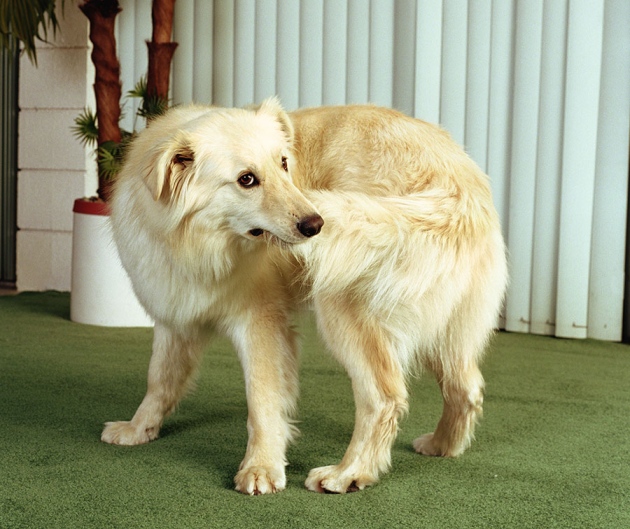 Tail-chasing in dogs is suspected to share genetic roots with human obsessive–compulsive disorder.

Addie plays hard for an 11-year-old greater Swiss mountain dog — she will occasionally ignore her advanced years to hurl her 37-kilogram body at an unwitting house guest in greeting. But she carries a mysterious burden: when she was 18 months old, she started licking her front legs aggressively enough to wear off patches of fur and draw blood.

Addie may soon help researchers to determine why some dogs are more prone to the disorder than others. Her owner, Marjie Alonso of Somerville, Massachusetts, has enrolled her in a project called Darwin’s Dogs, which aims to compare information about the behaviour of thousands of dogs against the animals’ DNA profiles. The hope is that genetic links will emerge to conditions such as canine compulsive disorder and canine cognitive dysfunction — a dog analogue of dementia and possibly Alzheimer’s disease. The project organizers have enrolled 3,000 dogs so far, but hope to gather data from at least 5,000, and they expect to begin analysing DNA samples in March.

Researchers have long struggled to find genetic links to human psychiatric disorders by analysing DNA samples from thousands of people. Those efforts have in recent years met with some success in schizophrenia and depression. But for some conditions, including OCD, not a single robust genetic link has been sifted from the background noise of normal genetic variation.

Human studies are difficult in part because the species is so genetically diverse, says Wynne. Dogs, however, are more genetically homogeneous. Selected over thousands of years for particular characteristics, they display less genetic variation than do humans. Pure-bred dogs, in particular, have been rendered highly genetically consistent to achieve a homo­genous appearance and behaviour.

Dogs also live side-by-side with humans, which some think can make them a better model for human disorders than mice living in a laboratory cage.

These qualities have made dogs attractive targets for studies of analogues to human ailments, including epilepsy, cancer and various psychiatric disorders. Border collies, for example, may over-react to loud noises in a manner akin to people with anxiety disorders. Geneticist Elinor Karlsson of the University of Massachusetts Medical School in Worcester and her colleagues have studied canine compulsive disorder, a condition that is particularly common in certain breeds, including Dobermann pinschers. Their studies in 150 dogs have found possible links to four genes that encode proteins that act in the brain (R. Tang et al. Genome Biol. 15, R25; 2014).

To expand on those results, Karlsson has decided to go big. Limiting her studies to specific breeds would make it easier to pick out some genetic links, but others might be missed. So Karlsson and her colleagues, including Jesse McClure, a former dog trainer for the US Marine Corps, decided to collect data from mongrels as well as pure-bred dogs and to crowdsource the data collection.

That focus on mixed-breed dogs is unusual but shrewd, says Adam Boyko, a geneticist at Cornell University in Ithaca, New York. Although more than half of the dogs in the United States are mongrels, genetic studies tend to focus on pure-bred animals. “Genetics often deals with the interactions between genes,” says Boyko. “And if you want to truly understand those, you want to study individuals where you’ve shuffled up the genes.”

Human participants in Darwin’s Dogs, which launched last October, answer about 130 questions about their pets’ behaviour. The questions cover everything from ‘Does your dog generally enjoy life?’ (the answer, says Karlsson, is overwhelmingly ‘yes’) to ‘Does your dog cross its paws when it lies down?’. Some questions were inspired by surveys that assess impulsivity in humans. Other questions have been suggested by Alonso, who is the executive director of the International Association of Animal Behavior Consultants in Cranberry Township, Pennsylvania, and by other dog trainers on the basis of observations made over decades of working with animals that have behavioural problems.

Karlsson says that she is thinking of expanding the list of questions even further. “Fortunately, it turns out that people love to talk about their dogs,” she says.

Ultimately, the success of the project may hinge on the quality of those surveys and the specificity of the questions asked, says Wynne. Asking owners whether their dog is happy, for example, could yield mixed results. “One person’s unhappy dog is another person’s comfortably resting dog,” he says. “A good question would be: ‘Does your dog poop on the carpet?’ Because poop on the carpet is pretty damn clear.”

It is still unclear how useful the results from dogs will be in shedding light on human behavioural variation. Karlsson is hopeful that even if different genes are involved in the two species, they may converge on the same cellular pathways. Gerald Nestadt, a psychiatrist who specializes in OCD at Johns Hopkins University in Baltimore, Maryland, notes that affected animals often display only one type of compulsive behaviour, whereas a human with OCD will typically have several.

Even so, he adds, the field is hungry for any leads it can get. “Anything that will help is worth trying,” he says. “I think this project is a great idea.”

For their part, Alonso and other participants are eager to learn more about their own dogs and why they behave the way they do. Miranda Workman of Buffalo, New York, enrolled her three dogs — Zeus, Athena and Sherlock — into the study, in part to gain insight into their behavioural quirks. Although Athena, a 34-kilogram Dutch shepherd, was bred to be a dedicated herding and guarding dog, she has a jovial side that is not often found in her breed. And Sherlock, a Jack Russell, is more shy and sensitive than other terriers.

“I have some dogs that don’t necessarily fit the stereotype,” says Workman. “Is it their environment that’s different or are they different? It will be fun to find out why they are that way.”