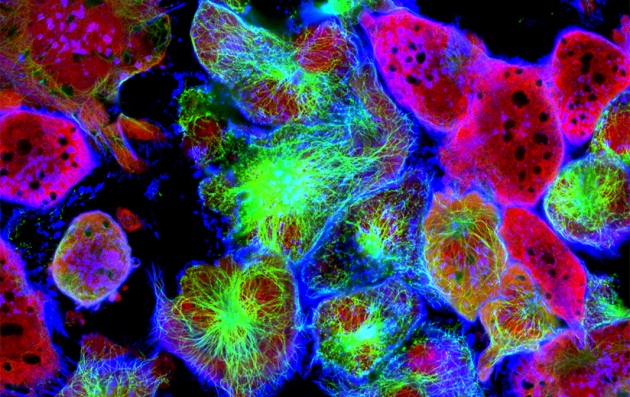 Many of the genetic mutations in tumour cells such as these are created by DNA-replication errors.

Nearly two-thirds of the mutations that drive cancers are caused by errors that occur when cells copy DNA, mathematical models suggest.

The findings, published in Science on 23 March1, are the latest argument in a long-running debate over how much the environment or intrinsic factors contribute to cancer. They also suggest that many cancer mutations are not inherited and could not have been prevented by, for example, making different lifestyle choices. It’s a finding that could change how researchers wage the “war on cancer”, says study co-author Bert Vogelstein, a geneticist at the Sidney Kimmel Comprehensive Cancer Center in Baltimore, Maryland.

Researchers have tended to emphasize the role of environmental factors in generating cancer mutations, he says. “If we think of the mutations as the enemies, and all the enemies are outside of our border, it’s obvious how to keep them from getting inside,” Vogelstein explains. “But if a lot of the enemies — in this case close to two-thirds — are actually inside our borders, it means we need a completely different strategy.”

That strategy would emphasize early detection and treatment, in addition to prevention, he says.

Each time a cell divides, it provides an opportunity for errors to crop up during DNA replication. In 2015, Vogelstein and one of his co-authors, mathematician Cristian Tomasetti of Johns Hopkins University in Baltimore, created a stir with an analysis2 that looked at possible explanations for why some cancers occur more often than others. They concluded that differences in the number of stem-cell divisions in an organ correlated with the frequency of cancers in that area. There aren't as many stem cell divisions in areas with less common cancers, including in the brain, than in sites with more common cancers such as colorectal cancer.

There were fears that the study’s conclusions could undercut prevention efforts, and it sparked hundreds of follow-up papers3. “It reignited a debate about how much cancer is due to environmental factors,” says Robert Noble, who specializes in mathematical models of cancer at the Swiss Federal Institute of Technology Zurich in Basel.

Vogelstein counters that the study never intended to challenge efforts to combat known causes of cancer, such as cigarette smoking and sun exposure, which can create cancer-causing mutations. Epidemiological studies suggest that about 42% of cancers are preventable, he says, and his results do not contradict that. (Because his study looks at the number of cancer-causing mutations — and it typically takes more than one such mutation to cause cancer — the numbers are not directly comparable.)

The latest study addresses two criticisms of the 2015 paper. It expands the analysis beyond the United States, to include databases of cancer incidence from 69 different countries, and it includes two common cancers — breast and prostate — that were omitted from the first study. The results of the expanded analysis support the conclusions from the earlier paper, says Tomasetti.

He and his colleagues then calculated the relative contribution of the environment, heredity and random DNA-replication errors to cancer-causing mutations. The team used data from a UK cancer database and, in some cases, cancer genome sequencing efforts, and looked for mutations that are indicative of particular environmental exposures.

The researchers found that these percentages vary from cancer to cancer. In some lung tumours, for example, environmental factors account for 65% of all cancer-causing mutations, whereas replication errors comprise only 35%[1]. Yet in prostate, brain and bone cancers, more than 95% of cancer drivers are caused by random DNA-copying errors.

Overall, calculations across 32 cancers indicated that about 66% of cancer-driving mutations are due to random DNA replication errors, with only 29% due to environmental factors and 5% to inherited mutations.

The method the authors used is sound, says Noble, although they did have to rely on a number of assumptions to simplify the analysis.

Yusuf Hannun, director of the Stony Brook Cancer Center in New York, worries that the study underestimates the contributions of environmental and heritable factors because researchers do not yet know how to fully predict these on the basis of sequence and epidemiological data. For example, although it may be possible to estimate how much smoking contributed to someone’s lung cancer, it would be more difficult to fully capture the impact of air pollution or exposure to radon, he says.

And overall, Noble says, the controversy has served a purpose by galvanizing the field to develop better models of cancer’s causes. “A lot has come out of this debate,” he says. “It’s been very useful.”

Vogelstein hopes that the results will alleviate some of the guilt felt by patients and their families — especially parents of children with cancer — about their condition. Many turn to the Internet for answers, and are greeted with a common message: something in their lifestyle or genes caused the disease. “They need to understand that these cancers would have occurred no matter what they did,” he says. “We don’t need to add guilt to an already tragic situation.”