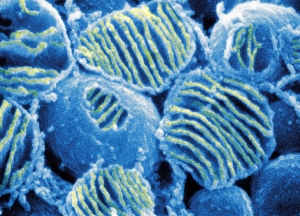 Mitochondria produce energy in cells; swapping them in an unfertilized egg can reduce the risk of disease in the offspring.

Researchers say that technology to shuffle genetic material between unfertilized eggs is ready to make healthy babies. The technique could allow parents to minimize the risk of a range of diseases related to defects in the energy-producing cell organelles known as mitochondria.

Mitochondrial defects affect an estimated 1 in 4,000 children, and can cause rare and often fatal diseases such as carnitine deficiency, which prevents the body from using fats for energy.

They are also implicated in a wide range of more common diseases affecting children and adults, such as multiple sclerosis and Parkinson’s disease. Mitochondria have their own DNA and are inherited only from the mother, so replacing defective mitochondria in eggs from mothers who have a high risk of passing on such diseases could spare the children.

Three years ago, a team led by Shoukhrat Mitalipov, a reproductive biologist at Oregon Health and Science University in Beaverton, created1 eggs with donor mitochondria that developed into healthy rhesus monkeys (Macaca mulatta). Today, the same team reports2 the creation of human embryos in which all of the mitochondria come from a donor. The method needs to be tweaked to increase efficiency and gain regulatory clearance, but it is ready for the clinic, says Mitalipov. “You can expect the first healthy child to be born [using this method] within three years.”

Just as they did with the monkeys, Mitalipov and his colleagues removed the nucleus from an unfertilized egg, leaving behind all of that cell’s mitochondria, and injected it into another unfertilized egg that had had its nucleus removed. They then fertilized the egg in vitro.

In the previous experiment, the team proved in convincing fashion that the fertilized monkey eggs were good — by implanting them in uteri, where they produced four healthy offspring. To evaluate the results with human cells, the researchers had to settle for developing the embryos to the blastocyst stage — a ball of about 100 cells. They used cells from the blastocysts to produce embryonic cell lines, and then carrying out various tests on them. The cells looked like those from normal embryos, but with mitochondria exclusively from the donor.

David Thorburn, a specialist in the genetics of mitochondrial disorders at the University of Melbourne in Australia, is “surprised and impressed” by the work. He is particularly happy that the team followed up the monkeys to track any long-term effects of the DNA transfer. None have been seen. Mitalipov’s group also used monkey cells to show that the technique works with eggs that have been frozen — something that will be crucial in the clinic.

Thorburn is not convinced that the technology is ripe for clinical use. He would like to see more data from the monkeys, including whether animals bred using the technique can successfully have their own babies, and more data on possible abnormalities that can arise during development in both the monkey and human embryos.

But if it does move forward, there will be “hundreds of families worldwide wanting to make use of the technology” each year, he says.

Mitalipov agrees that mysteries remain. Some 50% of the human eggs underwent abnormal fertilization, in which excess maternal nuclear DNA remained — a problem seen much less frequently in the monkeys or in controls. “It looks like human oocytes are more sensitive,” he says. Mitalipov hypothesizes that “incomplete meiosis” — splitting of the cells — caused the problem, and he is now tweaking the method. But even so, some 20% of the eggs produced embryos that would have been suitable for transfer to the uterus.

The US National Institutes of Health (NIH) restricts funding for research that destroys human embryos, so Mitalipov had to do his work with money from private sources, and in a “mirror laboratory” that shared no resources with his NIH-funded research. However, work in the clinic will create eggs that are not meant to be destroyed, so might be eligible for public money. “Now the questions is: will the NIH fund the clinical research?” asks a somewhat exasperated Mitalipov.

Before the technique can be used in the clinic in the United States, it must be approved by the US Food and Drug Administration, which has asserted its authority over reproductive technologies. Mitalipov submitted an application for approval in January, but has so far received no response. “The ball is on their side of the court,” he says. “We just want their guidance. Unfortunately the patients are waiting.”

Approval could be a long time coming: the public and legislators are wary of creating hybrid “three-parent babies”. The technique does mix genetic material from a mitochondria donor, the mother who provides the nucleus and a father. That mix will remain in any descendants.

In the United Kingdom, things might move faster. A team at Newcastle University has conducted similar experiments, and authorities have been considering their stance on the technology. An independent regulator, the Human Fertilisation and Embryology Authority, launched a public consultation in September.

Once approved, the technology could spread quickly. Mitalipov says the most complex apparatus involved is a microscope and lasers for drilling into the egg, which are already commonly used in fertility clinics as part of in vitro fertilization techniques and preimplantation genetic testing. “The clinics will learn. It shouldn’t be difficult to master,” he says.