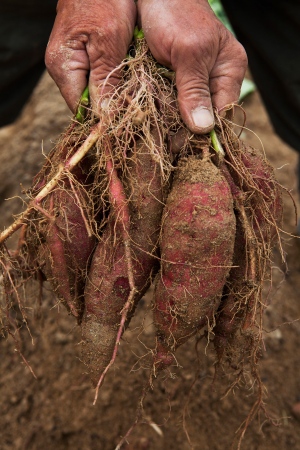 Sweet potatoes have been travelling the world for more than 1,000 years.

The humble sweet potato is an immigrant to Oceania. Native to South America, the tuber has proliferated through Polynesia and the surrounding Pacific islands — but no one is sure how it got there. Using genetic evidence from herbarium specimens and modern crops, researchers have now narrowed down the route of the sweet potato, which could provide clues as to the movements of the people who carried it.

At least three distinct hypotheses have been set forth to explain the migration of the sweet potato (Ipomoea batatas). Some archaeologists have taken the similarity between various words for sweet potato — 'kuumala' and its derivatives in Polynesia, and 'kumara', 'cumar' or 'cumal' among Quechua speakers in northwestern South America — as evidence that the tuber proliferated in Polynesia after an early introduction by locals who visited South America, long before Europeans made it there. Another theory is that the sweet potato might have reached Oceania through the natural dispersal of seeds across the Pacific Ocean.

A genetic map of the potato's pathway published today in the Proceedings of the National Academy of Sciences1 throws support to a third school of thought. In the 'tripartite' hypothesis, developed in the 1970s by the archaeologist Douglas Yen, then at the Bishop Museum in Honolulu, Hawaii, the sweet potato arrived in Oceania multiple times2. First, between 1000 and 1100 ad, Polynesian voyagers visited South America and brought the sweet potato back with them, later spreading it around other Pacific islands; Europeans then transported other sweet-potato lineages to the Philippines and the western Pacific in two separate waves from the sixteenth century onwards. From there, genetically distinct sweet-potato lines would have dispersed throughout Oceania.

The latest study favours this tripartite scenario. A team led by Caroline Roullier, a botanist at the Centre for International Agricultural Cooperation and Research for Development in Montpellier, France, took genetic samples from modern sweet potatoes and historical specimens kept in herbarium collections.

The herbarium specimens included plants collected during Captain James Cook’s 1769 visits to New Zealand and the Society Islands. Roullier and her team targeted historical specimens in particular, because they reflect how different sweet-potato varieties spread through Oceania before exchanges and cultivation overwrote their genetic signatures. The story of how the sweet potato crossed the sea, in turn, records ancient contact between Polynesia and South America.

Using short DNA sequences from the plants' cell nuclei and chloroplasts, Roullier and her co-authors found that the vegetables not only carry the genetic heritage of their South American origin, but exist in different types in Polynesia and the western Pacific. The sweet potatoes in Polynesia were part of a distinct lineage that was already present in the area when European voyagers introduced different lines elsewhere. Each lineage may even have been introduced several times, further complicating the pattern of dispersal and exchange. “The present sample of herbarium accessions does not allow us to rule out multiple prehistoric introductions,” Roullier says.

Historical specimens will be crucial to elucidating these patterns. The sweet potatoes collected by Captain Cook’s voyage, for example, “provided time-controlled data” that show “the importance of continuing to curate such specimens in the world’s museums”.