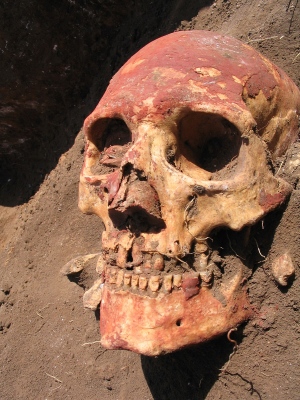 The Yamnaya people are thought to have carried their burial practices and other traditions into Europe.

Only half a decade after a 4,000-year-old tuft of hair yielded the first ancient-human genome1, researchers are starting to sequence ancient genomes by the dozen, much as they do with modern genomes.

Such population-scale sequencing is answering long-standing questions about the Eurasian Bronze Age. This tumultuous period between about 3000 bc and 1000 bc saw new technologies and cultural traditions — from the use of finely crafted weaponry and horse-drawn chariots to changes in burial practices — spread across Europe and Asia, starting in the steppe between the Black Sea and the Caspian Sea.

As DNA data flood in, researchers say, the mass-genome approach will paint an increasingly accurate picture of the past and show how ancient events shaped modern humanity — from what we eat to the diseases that ail us. “Christ, what does this mean?” says Greger Larson, an evolutionary geneticist at the University of Oxford, UK. “In another five years, we’ll be talking about tens of thousands of ancient genomes.”

The dawn of ancient population genomics is the result of cheap DNA sequencing and the rise of boutique lab techniques that can separate highly degraded ancient DNA from contemporary contaminants.

A team led by palaeogenomicists Morten Allentoft and Eske Willerslev at the Natural History Museum of Denmark in Copenhagen has used these advances to sequence the genomes of 101 people who lived across Eurasia between about 3000 bc and ad 700 (ref. 2). “We could have stopped at 80,” says Allentoft. But “we thought, ‘Why the hell not? Let’s go above 100.’”

The sequences allowed the team to tackle questions that have vexed archaeologists for decades, says Allentoft. For example, researchers have disagreed over whether the cultural changes of the Bronze Age were the result of migration or simply the spread of ideas. Allentoft and his colleagues found evidence for migration, in the form of a massive shift in the genetic make-up of northern and central Europeans at the start of the Bronze Age. Before 3000 bc, their genomes resembled those of early farmers from the Middle East and even earlier European hunter-gatherers. By 2000 bc, their genomes looked more like those of people from the Yamnaya culture, which arose on the steppe around 2900 bc.

The findings echo those of a team that sequenced 69 ancient Europeans3. Both groups speculate that the Yamnaya migration was at least partly responsible for the spread of the Indo-European languages into Western Europe.

Allentoft’s team found genetic traces of the Yamnaya in people who lived near the Altai Mountains in central Russia from 2900 bc to 2500 bc, potentially explaining why Indo-European languages are spoken so far into Asia. “It’s pretty clear that these eastern cultures in the Bronze Age are linked to the Yamnaya,” says Pontus Skoglund, a population geneticist at Harvard Medical School in Boston, Massachusetts. But he is not yet convinced that the culture’s wanderings explain the origins of all Indo-European languages.

Ancient population genomics also offer insights on physical and physiological traits. Allentoft’s team found that the ability to digest milk into adulthood — nearly universal in northern Europeans today — was rare in Bronze Age Europeans, contradicting earlier claims that the trait helped early European farmers to gain calories from milk. Of the 101 sequenced individuals, the Yamnaya were most likely to have the DNA variation responsible for lactose tolerance, hinting that the steppe migrants might have eventually introduced the trait to Europe.

Another team has analysed4 DNA from 83 ancient Europeans and discovered that a mutation linked to thick hair and numerous sweat glands, once thought to have emerged in East Asians, was common in Scandinavians as early as 7,700 years ago — potentially revealing a connection between these groups. That analysis, posted on the preprint server bioRxiv in March, also found evidence of evolutionary pressure on height: Iberians seem to have become shorter after farming arrived in what is now Spain and Portugal 8,000 years ago, whereas the Yamnaya who migrated out of the steppe appear to have been taller than their neighbours.

In future, researchers are likely to probe genomes to see how past events shaped modern susceptibility to disease, says Larson. For instance, survivors of the fourteenth century Black Death, which killed around half of Europeans, may have carried gene variants that protect against certain infections.

“It’s an interesting time, because the technology is moving faster than our ability to ask questions of it,” says Larson, whose lab has also amassed around 4,000 samples from ancient dogs and wolves to chart the origins of domestic dogs. “Let’s just sequence everything and ask questions later.”