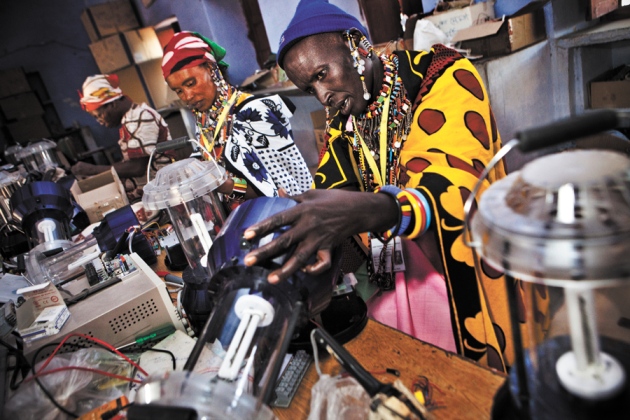 Masai women from Kenya take a course on solar energy in India.

To secure a safe, reliable and low-carbon energy future, we must alter both technologies and human behaviour1. The US Department of Energy notes2 that supply and demand is “affected as much by individual choice, preference, and behavior, as by technical performance”.

Yet many researchers and policy-makers continue to focus on only one side of the energy dilemma. In the United States, for every dollar in research funds spent on behavioural and demand-side energy research, $35 is spent on energy supply and infrastructure3. Social sciences, humanities, and the arts are marginalized in energy research, and major statistical agencies do not usually collect qualitative data about energy consumption. Similar problems are apparent in Europe4.

My analysis of the peer-reviewed energy-research literature shows how biases handicap the field5. Engineers and economists are ignoring people and miscasting decision-making and action. Academic researchers frequently obsess over technical fixes rather than ways to alter lifestyles and social norms6. Interdisciplinary research remains stymied by institutional barriers in academia and government7. National and local energy bodies have conventionally had few social scientists on staff8. And most leading journals in the field focus on one discipline.

Now the energy field needs to learn from health, agriculture and business, and bring together social and physical scientists. Universities should develop courses focused on solving energy problems, granting agencies should prioritize and direct more money to behavioural work, and energy journals should broaden their scope. Already, there are promising examples of how inclusive and interdisciplinary energy research can encourage energy efficiency, and so address global environmental challenges such as climate change9.

I examined the authorship and scope of 4,444 full-length articles over 15 years (1999 to 2013) in three leading energy technology and policy journals: Energy Policy and The Energy Journal have high impact factors, and The Electricity Journal was included to sample a regulatory journal. I found four worrisome trends: an undervaluation of the influence of social dimensions on energy use; a bias towards science, engineering and economics over other social sciences and the humanities; a lack of interdisciplinary collaboration; and the under-representation of female authors or those from minority groups.

For instance, technology adoption, the complexity of choice-making, and the human dimensions of energy use and environmental change were rarely covered (see ‘Neglected topics’). Most articles (85%) focused on advanced energy-production systems, such as nuclear reactors, sources of renewable electricity and biofuels, or the technical elements of electricity generation, transmission and distribution — hardware — rather than the human 'software' behind it. Simple devices such as cooking stoves, bicycles, light bulbs and distributed generation were studied in less than 3.5% of articles. Behaviour and energy demand was investigated in less than 2.2% of papers. If this work is being published, it is in environmental sociology, psychology and political-science journals that few energy researchers read.

Social-science authorship and citations are also relatively low (see 'Publishing trends'). Science, engineering, economics and statistics account for more than half (67%) of institutional affiliations as reported by authors; non-economic social science for less than 20%. Sociology, geography, history, psychology, communication studies and philosophy each constituted less than 0.3% of author affiliations.

References to social-science and humanities journals, with their insights into how consumers and politicians behave, were less than 4.3% of 90,097 citations across the sample. Little research took place in the 'real world'. Most studies are the result of work undertaken at the bench or desk using computer models and experiments, rather than field research, interviews and surveys.

Another trend is that the scientists and engineers writing in these journals rarely collaborate beyond their fields. About half of published authors in the sample wrote alone and one-quarter published with colleagues within their discipline. Less than 23% of articles involved interdisciplinary collaborations between authors. 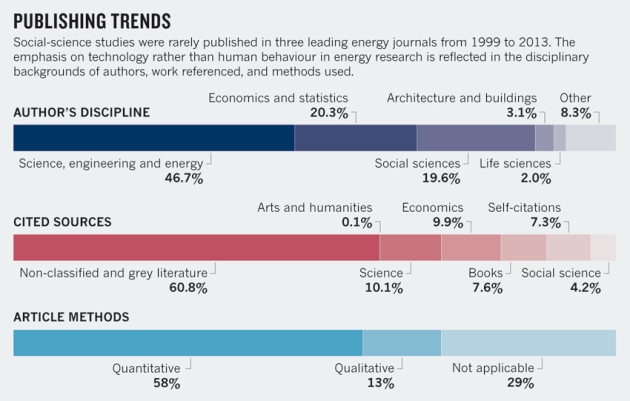 Furthermore, the vast majority of authors hale from affluent Western institutions and countries where research money is abundant. They focus on problems facing the industrialized world. Of the 9,549 authors who listed their country of residence, 87% came from either North America or western Europe. African, Asian, Latin American and Middle Eastern authors were few. Authors were mostly male: only 15.7% could be identified as female. Norms of authorship and collaboration vary, but these trends held for each year examined: female authorship remained below 17.4% and non-Western authorship under 16%, for example.

To bring in social scientists and other marginalized researchers, I have five recommendations.

First, public and private organizations should overhaul the way they structure and disburse funding for energy research and development. They should give a bigger slice to social scientists, improve incentives for interdisciplinary work and prioritize social topics in their funding calls — such as the perceptions of energy users, the needs of people affected by energy production and prevailing customs, traditions and behaviours.

Second, to reduce disciplinary bias, energy ministries, statistical agencies and public utility commissions should focus more on energy behaviour and demand, rather than just supply. Delaware and the District of Columbia, for instance, have sustainable-energy utilities, which advise residents about behavioural changes they can make to save energy and money. The statewide energy-efficiency utility, Efficiency Vermont, provides funding and behavioural guidance to homes, farms and factories.

Third, administrators should make energy research more problem-oriented, including social perspectives as a matter of course. Universities should develop topical programmes on energy, as they have in agricultural research, medicine and business. Curricula might include efficient and sustainable consumption, risk management, public decision-making and the design of technologies for public acceptance and use. Good examples include the University of Edinburgh, UK, which offers an interdisciplinary master's degree in climate accounting; Aarhus University in Denmark has a business-development degree that combines engineering, innovation studies, energy studies, business and marketing; and Carnegie Mellon University in Pittsburgh, Pennsylvania, has an engineering and public policy department. Outside academia, the US Defense Advanced Research Projects Agency has successfully used a 'challenges-centred' approach to national-security problems since it was created in 1958.

Fourth, researchers should do more to accommodate expertise and data from laypersons, indigenous groups, community leaders and other non-conventional participants. Although this may require special training to do effectively, such interactions would encourage greater feedback and integrate diverse viewpoints.

Energy studies must become more socially oriented, interdisciplinary and heterogeneous. Problem-focused research activities that centre on both physical and social processes, include diverse actors and mix qualitative and quantitative methods, have a better chance of achieving analytic excellence and social impact.