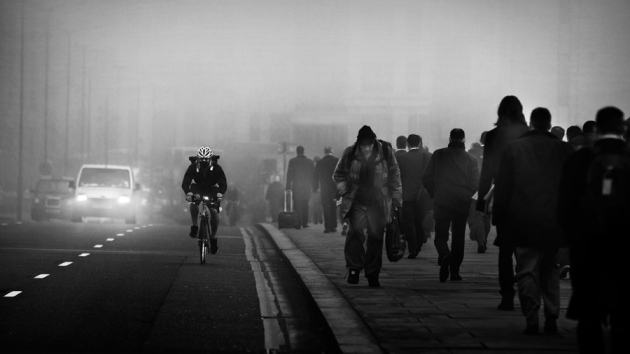 In Pictures Ltd./Corbis via Getty

A study suggests that petrol engines might not be cleaner than diesel ones after all.

In Arizona, you can do it for 5 minutes, and longer when it gets warm. If it’s cold, then in Connecticut you can stay at it all night. Do it in London and you will now be fined £80 (US$104). And please do keep it away from schools.

To sit in a stationary vehicle with the engine running might seem a pointless waste of fuel, but a surprisingly high number of drivers do it for hours on end. From truck drivers who want to keep the lights and air conditioning running while they rest to commuters in Alaska who need their car to start in the morning, engine idling is a traditional and beneficial part of many road users’ routines.

But now it’s time to stop, say health officials in the United Kingdom. They are starting to crack down on parents who idle away in their cars at the kerbside as they wait for children to emerge from school. It’s an unnecessary source of air pollution, the officials argue, and part of the reason why 59% of people in the United Kingdom live in areas where nitrogen dioxide pollution is above legal levels.

Banning idling outside schools is a sensible move. It comes as the focus on the environmental impact of the internal-combustion engine is in many cases switching away from its contribution of carbon dioxide to global warming, and instead towards exhaust pollutants that have a more immediate local impact on air quality.

The switch is most evident in the harder line that many cities are taking on diesel engines. Diesel-fuelled cars were previously encouraged with cuts in fuel duty, vehicle tax and other incentives because they produced less CO2 than petrol-fuelled vehicles, but now they are in the environmental firing line because they often yield more nitrogen oxides and particulate matter. From October, drivers of older diesel models will pay more to enter London and, under current plans, the restrictions will tighten in future to cover even the newest models. The mayors of Paris, Athens, Madrid and Mexico City have pledged an outright diesel ban by 2025. And in January this year, Oslo forced diesel drivers to stay off the roads for a day to combat a spike in air pollution.

The image of diesel as a cleaner fuel was hardly helped by the 2015 scandal in which the German car manufacturer Volkswagen was caught cheating on emission tests. The company’s diesel vehicles were found to be much more polluting than Volkswagen had claimed.

So, is petrol now good and diesel bad? Not quite — at least according to an analysis of the two engine types published this week in the journal Scientific Reports (S. M. Platt et al. Sci. Rep. 7, 4926; 2017). There is no dispute on nitrogen oxides: combustion of diesel simply produces much more of them than burning petrol, and that’s damaging because the gases can aggravate respiratory and cardiovascular conditions. (As well as having indirect effects such as the generation of low-level ozone.)

But the picture is less clear-cut when it comes to a different exhaust pollutant. According to the analysis, newer diesel engines actually spew out less toxic sooty waste than petrol versions. That’s because most of the carbonaceous particulate matter produced when the fuel is burnt is trapped by the filters that are fitted to modern diesel vehicles. The difference is especially pronounced in cold conditions, and the scientists concluded that “diesel cars are not necessarily worse polluters than gasoline cars”.

Put another way, petrol cars are not always cleaner. So why not do away with diesel and petrol engines altogether? The Swedish carmaker Volvo pledged to do just that earlier this month, saying that all new models will be battery-driven or hybrid by 2019. And France and Germany, among other countries, have made plans to drive both petrol and diesel cars from the road. It sounds good for the environment, but the issue then, of course, is how to generate the electricity needed to replace the liquid fuel. Britain’s National Grid said this week that increased demand for vehicle charging could soak up the output of an entire major nuclear power station by 2030. Maybe more people could, well, walk?