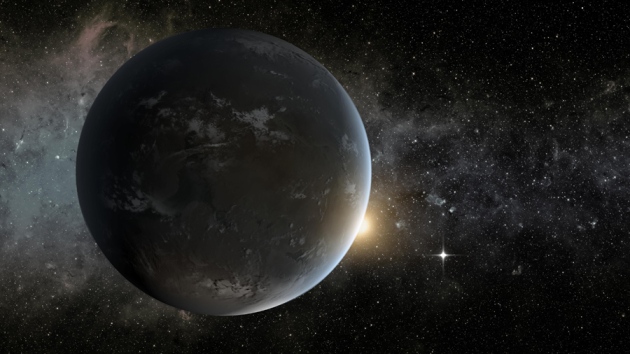 Starlight has been used to determine the mass of distant planets.

Researchers have weighed a planet orbiting a distant star by measuring the starlight passing through its atmosphere. The technique could accelerate the hunt for Earth-like worlds.

Knowing the mass of an extrasolar planet, or exoplanet, is an important step in determining whether it is rocky, and thus potentially home to life. To find that mass, astronomers usually rely on radial-velocity measurements, in which tiny wobbles in a star’s orbit reveal the gravitational tug (and hence mass) of an orbiting planet. Radial velocity works best for big planets that orbit bright, steadily shining stars, so exoplanet scientists would like to have methods that they can apply to other planets around other types of stars, including fainter ones.

In a paper appearing today in Science1, Julien de Wit, a planetary scientist at the Massachusetts Institute of Technology in Cambridge, and his supervisor, Sara Seager, report that they can calculate a planet’s mass by analysing the spectrum of its star's light.

When a planet passes in front of its star as seen from Earth, it temporarily blocks a small fraction of the star's light — many exoplanets have been discovered by measuring this dip in the star's brightness. But an even tinier fraction of the light gets through after skirting the planet and passing through its atmosphere.

The atmosphere acts as a filter, changing the spectrum of the light. But the filtering effect is different at different altitudes, and it depends on conditions such as atmospheric pressure, temperature and the gravitational pull of the planet. De Wit worked through the equations and showed that while the planet is transiting in front of it, the star’s spectrum contains information about most of these factors. That leaves mass (which is related to the gravitational pull) as the only unknown, which can be calculated from the other parameters.

In one case where a planet's mass was already known from the radial-velocity method, de Wit showed that his technique gave the correct result.

The fraction of starlight that passes through the planetary atmosphere is especially minuscule for small-radius planets, which can make the effects on the spectrum so tiny as to be almost undetectable. With current telescopes, de Wit's method works only for Jupiter-sized planets that orbit close to their stars. But with better instruments on future telescopes, it might be particularly useful for planets around cool, faint but numerous M-dwarf stars, de Wit says. And the James Webb Space Telescope, which NASA plans to launch in 2018, might be able to weigh Earth-sized worlds around such stars as far away as 50 parsecs (about 160 light years).

It could take hundreds of hours of observation to study a single star for long enough to get sufficient data to calculate planetary mass, says Heather Knutson, who studies planetary atmospheres at the California Institute of Technology in Pasadena. “I would bet that only a handful of low-mass planets will be fully characterized using this technique,” she says.

Still, the technique could find uses with a proposed European mission to study exoplanets. Next month, an advisory committee for the European Space Agency is slated to choose between five competitors for a medium-class mission launch in 2024. One of the candidates is an Exoplanet Characterization Observatory (EChO) that would take detailed spectra for hundreds of possible exoplanets.