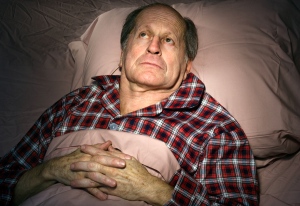 A disturbed night's sleep might signal a future diagnosis of Alzheimer’s disease, according to findings presented this week at the annual meeting of the Society for Neuroscience in New Orleans, Louisiana.

Roxanne Sterniczuk, a neurophysiologist at Dalhousie University in Halifax, Canada, and her colleagues wanted to determine how early these changes occur and if they could predict a person’s future risk of developing the disease.

Sterniczuk and her colleagues analysed data from around 14,600 healthy people, collected as part of the Survey of Health, Ageing and Retirement in Europe (SHARE), a long-term observational study of people aged 50 and over from 12 European countries. They looked at various measures of sleep quality, and used them to produce a ‘sleep disturbance index’.

The researchers found that participants who reported sleeping restlessly, feeling tired during the day and taking sleep medication were more likely to be diagnosed with Alzheimer’s within the next 2 years, and that the greater the extent of these problems, the more severe were the symptoms of the subsequent disease.

“Increased daytime sleepiness was the biggest predictor,” says Sterniczuk. “It would appear that subtle changes in the sleep–wake cycle are taking place before any disease pathology.”

Alzheimer’s disease is characterized by two hallmarks — the deposition of insoluble plaques made up of amyloid- ß protein, which accumulate in the spaces around nerve cells, and protein aggregates called neurofibrillary tangles that are deposited inside cells.

Sleep disturbances may be an early marker for the brain changes that occur as the disease develops, or they may contribute to progression of the disease, says David Holtzman, a neurologist at Washington University School of Medicine in St Louis, Missouri, who studies Alzheimer’s disease. “Either that pathology is beginning to occur during ageing, or sleep problems lead to accelerated Alzheimer’s pathology and disease,” he adds.

Last month, Holtzman and his colleagues reported that in a mouse model of Alzheimer’s the sleep–wake cycle breaks down following the formation of amyloid-ß plaques, and that eliminating the plaques caused the cycle to return to normal, suggesting that plaque formation causes the sleep disturbances1. But he adds that distinguishing between the two possibilities in humans will require long-term studies to assess how biological markers associated with Alzheimer’s disease change through life.

Sterniczuk is now investigating whether the changes in sleep patterns are related to alterations in gene activity in the suprachiasmatic nucleus, a region of the brain that controls the circadian rhythm and regulates the sleep–wake cycle.

She emphasizes how important it is to find ways to accurately diagnose the condition and identify people at risk of developing it. “We have an ageing population on our hands, and there may be an Alzheimer’s pandemic in the next 10–15 years as the baby boomers reach the typical age of diagnosis,” she says.