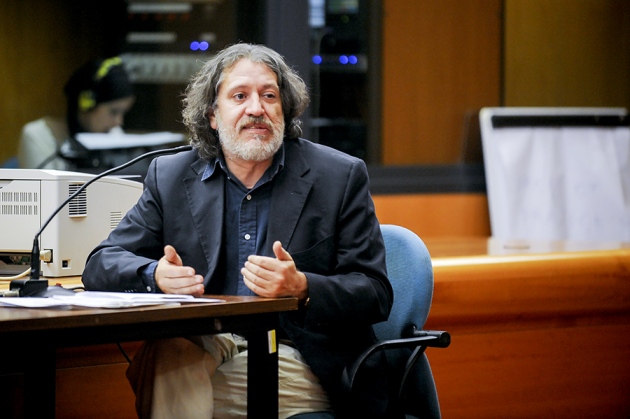 Davide Vannoni during court proceedings against his Stamina Foundation in 2014.

In March 2015, Vannoni was convicted on charges of conspiracy and fraud related to his treatments, which had been declared dangerous by the Italian Health Authority (AIFA). His case was a cause célèbre among Italian scientists, who fought for many years to stop him administering stem cells to patients through his Stamina Foundation (see Nature 518, 455; 2015).

Vannoni was sentenced to 22 months in prison, but the sentence was suspended in a plea bargain drawn up by prosecutor Raffaele Guariniello, who said that the terms required Vannoni to refrain from organizing further therapies — either in Italy or abroad. Soon after the plea bargain, patient groups on social media posted comments that the stem-cell treatment was available once more, in Georgia. And in late October, a patient came forward with a detailed account of his treatment. Prosecutors told Nature that this has prompted them to take action.

Vannoni did not respond to requests for comment, forwarded through his lawyer, Liborio Cataliotta. But Cataliotta told Nature that, although he did not know whether Vannoni was continuing therapies in Georgia, he thought there were “technical defects” in what Guariniello had said about the terms of the plea bargain. The prosecutor had no authority to rule on what might be carried out in countries where such stem-cell therapies are allowed, he said.

Guariniello has since retired, but another prosecutor in Turin, Vincenzo Pacileo, told Nature that the deferred sentence hinges on the premise that Vannoni “gives up” his stem-cell activities, a phrase that Pacileo says implies both in Italy and abroad. However, a senior Italian legal expert who has read the 46-page sentence, but does not wish to be named, says that the premise is legally ambiguous. Nowhere does the document specify that this applies to activities abroad, he says.

“It is really disappointing that science has not been able to put an end to this,” says Luca Pani, a former director-general of AIFA. “A patient is a patient wherever they are treated, and I worry for them and their families.” Pani tried to close down Stamina’s operations in Brescia in 2012, but desperate patients got court orders allowing them to be treated. It took two years before magistrates in Turin ordered the confiscation of equipment and materials from the Stamina lab.

In July this year, the Italian news service ANSA reported that patients had claimed to have received the Stamina therapy in Georgia. It did not identify them or detail their clinical experience. But on 24 October, 52-year-old Andrea Zicchieri appeared in a tell-all report on the Italian television news channel La7, complete with video documentation. Zicchieri, who has a motor-neuron disease, said he had paid €18,000 (US$20,000) for a cycle of three treatments in Tbilisi between July and September that had been arranged with Vannoni. Zicchieri told La7 that his brother had gone to Tbilisi in May to donate bone-marrow cells that were used in the treatment, and that Vannoni was present while the treatment was carried out. He said that the treatment had not worked.

“It is really disappointing that science has not been able to put an end to this.”

Zicchieri, who has now been called to give evidence to the police, repeated the same details to Nature, providing screenshots of messages between himself and Vannoni, and adding that he had sought out Vannoni knowing that the treatment was controversial. “Even if there was only 1% chance of hope, I wanted to take that chance,” he said.

His account is consistent with talk on the social-media accounts of patient groups that support Vannoni’s work. According to photographs supplied by Zicchieri, the clinic was the Mardaleishvili Medical Center in Tbilisi, which also features on a patient-group site dedicated to the Stamina treatment. When Nature rang the centre for comment, a man said that Vannoni had been there and would return in January, and that all discussions about stem-cell therapy should go through Vannoni and not the clinic. He didn’t answer on further attempts to make contact.

Postings on two of Vannoni’s Facebook pages — previously reported in Italian media — suggest that he is now working abroad. In February, in response to a question about his whereabouts, Vannoni posted that he was “abroad to continue Stamina”. On another page, he posted a message in June thanking people for their birthday wishes, and noting that “sometimes one must abandon a battle to win a war. In short — to change one’s country. #750.” Underneath the post, commenters said that the #750 means that Vannoni is now claiming to have made 750 stem-cell infusions — many more than he had made in Italy. (An earlier message, posted on 24 December 2015, ends “#450”).

Vannoni’s therapy involves modifying stem cells taken from the bone marrow of a patient or relative, and injecting them into the patient. In Italy, Vannoni has used this approach in people with a range of conditions, from Parkinson’s disease to muscular dystrophy. Recent cases of similar treatments have led to cancers, notes Elena Cattaneo, a neuroscientist at Italy’s University of Milan who was among those who worked to stop Vannoni and who is now an Italian senator. That Vannoni has apparently started again is “a disgrace”, she says. “Governments and health institutes should do more to inform patients about these sorts of therapies.”