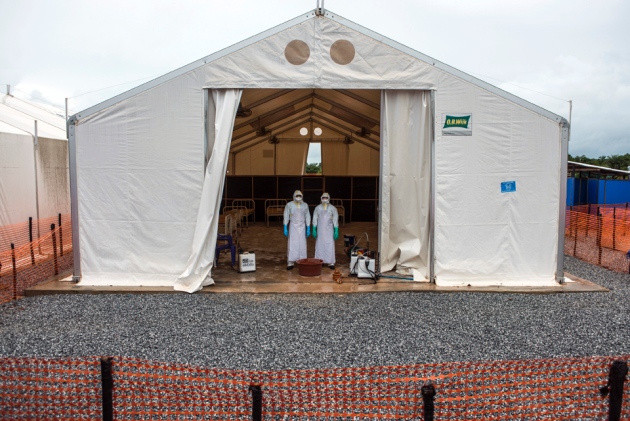 The West Africa Ebola outbreak has led experts to consider what diseases might spark the next major infectious disease crisis.

As West Africans try to bring the calamitous Ebola outbreak to an end, the World Health Organization (WHO) has called scientists and doctors to Geneva, Switzerland, on 8 and 9 December to discuss which infectious disease is likely spark the next pandemic. The WHO hopes not to be caught short, as it was last year when the West African outbreak raged unchecked for months before a massive effort to build treatment centres and to identify and quarantine contacts of patients brought it under control. The world should, perhaps, have been better prepared: in the 13 years preceding the first West Africa case, Ebola killed more than 700 people in 15 outbreaks. Nature canvassed infectious-disease specialists to find out which pathogens they thought would trigger the next global crisis, and which treatments and vaccines might be readied to combat them.

Other Ebola species or Marburg virus

Although a vaccine protected people against Ebola in a clinical trial conducted this year in Guinea, and researchers are optimistic about the antibody drug ZMapp, both products work against only one type of Ebola virus — the Zaire species. But two other species of Ebola virus and the closely related Marburg virus are lethal in people and have caused recent outbreaks; vaccines and drugs against these other viruses have not progressed far in clinical development.

“We hear the word Ebola and think of things like vaccines or ZMapp and we get a false sense of security,” says microbiologist Thomas Geisbert of the University of Texas Medical Branch at Galveston.

MERS is caused by a coronavirus, as is the common cold and severe acute respiratory syndrome (SARS). Like SARS, MERS has vague symptoms — fever, cough, shortness of breath — and seems to spread through coughs and sneezes, so epidemics can burn through hospitals, then throw off ‘embers’ as travellers export the disease. There is no specific vaccine or treatment for MERS, which is thought to spread from camels on the Arabian Peninsula to humans; it has infected more than 1,600 people and killed nearly 600 since 2012, when it was discovered. Researchers are developing vaccines for camels and for people and are concerned about the danger that MERS might spread to millions of camels in Africa. “This could bust out of the Arabian peninsula tomorrow, end up in East Africa, and go around the world,” says Michael Osterholm, a public-health scientist at the University of Minnesota's Center for Infectious Disease Research and Policy in Minneapolis.

It is only a matter of time until the next deadly flu outbreak, and experts agree that the world is unprepared. Unlike Ebola, which is spread only through close contact with a patient's bodily fluids, flu spreads easily; the 1918 flu pandemic killed as many as 40 million people. Researchers worry that genes will jump between flu viruses that infect pigs and chickens to produce a new, lethal and highly transmissible strain — a scenario made more likely by vast poultry and pig farms around the world. The current vaccine is not very effective and takes a long time to make. A vaccine against the 2009 H1N1 flu, for instance, did not become available until the peak of the epidemic had passed. Development has stalled on ‘universal’ flu vaccines that protect against many viruses simultaneously. “We have a tarmac full of candidate game-changing flu vaccines, but no one has built the runway for any of them to take off,” Osterholm says.

The 2011 film Contagion, a fictional portrayal of a global infectious-disease crisis, was based in part on Nipah, which infects a range of animals, including bats and pigs, then moves into humans, where it kills as many as 100% of people infected. It is also highly transmissible, spreading easily through the air or contact with surfaces such as bed sheets or even sap that has been tasted by infected bats. Nipah and a sister virus, Hendra, have killed hundreds of people in numerous outbreaks in Australia and Southeast Asia since they were first identified in the 1990s. Antibody drugs have been developed to help monkeys to survive infection with Hendra1 and Nipah2 viruses, and one for Hendra has been used to treat people in Australia. But these therapies might not work if new variants of these viruses emerge. The Australian government has vaccinated more than 100,000 horses against Hendra; a vaccine intended for human use has also been tested in monkeys3.

Some of the worst outbreaks in recent history have been caused by pathogens that were not known to science until they triggered lethal epidemics. That includes SARS, which emerged in late 2002 in southern China to kill 774 people in 11 countries by July 2003. In addition to beefing up medical capacity and surveillance for new diseases around the world, some specialists argue that the best way to prepare for what we cannot see coming is to develop general approaches to make vaccines, drugs and diagnostics quickly. That way, says Anthony Fauci, director of the US National Institute of Allergy and Infectious Diseases in Bethesda, Maryland, “you are better positioned to respond to anything, even something that you never imagined in your wildest dreams”.