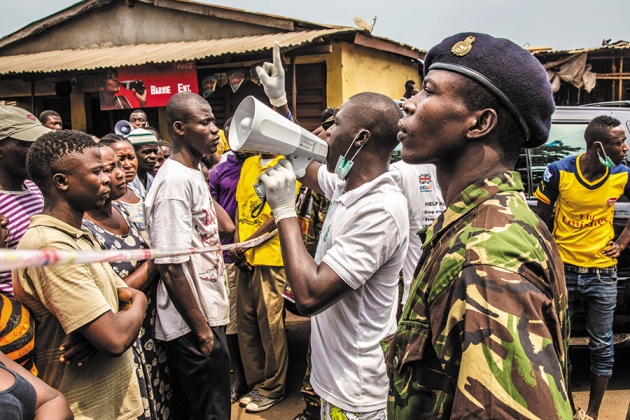 People in Sierra Leone queue for food in March, during a country-wide lockdown intended to curb Ebola.

Numbers of cases refusing to diminish, new communities being infected, bodies buried in secret. Sound familiar? It should. But these are not just scenes from last year's Ebola epidemic. They are playing out today in West Africa.

As head of Médecins Sans Frontières (MSF; also known as Doctors Without Borders), which has treated one-third of reported Ebola cases in the outbreak, I have witnessed how a lack of political will undermined the response in the early days of the epidemic. Now, fatigue and a waning focus are threatening the final push to end it.

In the past few months, a stream of intergovernmental panels has been convened to appraise the international response to the epidemic — by the World Health Organization (WHO), the World Bank and the G7 industrialized nations, among others. Meanwhile, an ever-growing list of philanthropic and academic institutions is preparing reports about 'lessons learned', to prevent future outbreaks. These include Harvard University in Cambridge, Massachusetts, and the Institute of Medicine, a US non-governmental organization (NGO).

Yet the Ebola epidemic in West Africa is far from under control. In the past three months alone, the number of cases — around 330 — is more than the third largest Ebola outbreak in history. Liberia, which was declared 'Ebola-free' in May, reported six cases by the end of June. And 20–27 cases have been confirmed across Guinea and Sierra Leone each week from mid-June to mid-July. A large proportion of these cases cannot be traced back to the lists of people known to have been in contact with infected people. Over the past two months, cases have also emerged in Guinea's Boke province, which borders Guinea-Bissau, a country with a weak health system and almost non-existent epidemiological surveillance and laboratory blood-testing capacity.

Equally concerning is that governments and aid agencies are still failing to earn the trust of some communities in their efforts to combat the epidemic, even though numerous experiences in the past 18 months have demonstrated just how crucial this is. On 29 May, for instance, the Red Cross was forced to withdraw workers from the north Guinea town of Kamsar in Boke after two Red Cross cars and an employee's home were attacked, and a warehouse containing equipment to enable safe burials was burnt down.

Albert Einstein defined insanity as doing the same thing over and over again, and expecting different results. As a global health community, we cannot talk about fighting future epidemics more effectively when we have failed to incorporate the lessons learned in this outbreak to bring it under control.

Getting to 'no new cases in at least 42 days' — twice the longest known incubation period for Ebola and the way in which the WHO defines the end of the epidemic — will require a major push. Ministries of health and aid agencies must do more to engage and empower communities in efforts to combat the disease, and to re-establish people's trust in government officials and health workers. The surveillance systems to locate and track new Ebola cases across Sierra Leone, Guinea and Liberia need to be properly supported — including in the districts that have not had an Ebola case for months. Governments, donors and NGOs must rebuild basic health-care infrastructure so that the countries affected can better deal with Ebola and the many other illnesses and conditions common to life in West Africa.

In April 2014, near the start of the outbreak, MSF teams faced hostility in Guinea. There were cases of people in forest regions throwing rocks at ambulances. Such clashes have continued sporadically, involving our teams and those of other organizations.

These attacks were not a surprise. Such events had been seen in previous haemorrhagic-fever outbreaks and during the 2010 cholera outbreak in Haiti. In the Ebola epidemic, strangers showed up in villages in what looked like space suits and took away loved ones, with only around half being seen again. At the peak of the epidemic, people were often not told when their relatives had died or were not given the chance to bury their dead according to custom.

From these incidents, from our community teams, and from the success of other international aid organizations, such as the Red Cross, we have learned how important it is to have the support of community leaders, both elected and traditional. Community buy-in to access affected or at-risk villages and towns, and talking through the importance of safe burials with families, is crucial. Since autumn 2014, MSF teams have often carried out only one or two burials each day to allow enough time to explain to relatives of people who died from Ebola the importance of wearing protective clothing and disinfecting the body.

In the village of Télimélé in Guinea, from May to July 2014, MSF ran an Ebola treatment centre near where the village elders stayed during the day. This allowed villagers and relatives to see their loved ones and how they were being cared for. Other initiatives, such as building windows in treatment centres to allow people to interact with infected family members, were received positively.

“There may be around 4,000 extra maternal deaths each year in the region.”

The Liberian government similarly recognized the importance of engaging communities in a dialogue about Ebola. When the country was declared Ebola-free in early May, President Ellen Johnson Sirleaf acknowledged that the forced quarantine of West Point, an impoverished neighbourhood in the capital, Monrovia, may have done more damage than good by fuelling mistrust (in August 2014, tens of thousands of people in West Point were cordoned off for ten days without access to basic health care).

Yet patients and at-risk communities continue to be treated at best as victims and at worst as biohazards and disease vectors, rather than as central to bringing the epidemic under control. The government of Sierra Leone is still using coercive measures as the main tool to fight the outbreak. As soon as a case is confirmed, people who have been in contact with the patient are put in quarantine in their homes or in special facilities for 21 days. In Port Loko, quarantine has been imposed more forcefully, with security guards being stationed in front of the homes of people thought to be infected to prevent them or their families from leaving.

In Guinea, quarantines — known locally as cerclage (encirclement) — started in July in some villages in the Forecariah and Boke provinces. From late June to late July, 25% of the cases in Sierra Leone and Guinea were identified after those infected had died in their communities, suggesting that people are still not recognizing or reporting the disease, or seeking care in specialized centres.

In the ongoing effort to combat Ebola, more needs to be done to rewrite the public-health narrative. It must move from one that has been infused with fear to one that recognizes the hope for survival that supportive care can offer infected people.

A major threat to bringing the current epidemic under control is the devastation to the public-health systems in all three countries (see ‘Six measures to end Ebola’). The nations, with help from the international community, must re-establish basic health-care and public-health measures such as infection control, precautions for handling blood and other bodily fluids, as well as triage. (Triage involves setting up systems through which patients can be quickly tested for various diseases and assigned to isolation areas until a diagnosis has been made.)

Isolate and care for patients. Quarantine infected people and provide medical and psychosocial support for patients and their families.

Engage communities. Work with communities to help them understand the nature of Ebola, how to protect themselves and how to stem transmission of the disease.

Trace contacts. Monitor those who have had contact with infected people to ensure quick referral for care if they fall ill.

Re-establish health-care systems. Make medical care available for people with illnesses and conditions other than Ebola.

The epidemic has left already-fragile health systems in tatters: at least 509 local health workers have died in the three affected countries, and routine vaccination programmes for diseases such as measles, rubella, tetanus and polio have all but ground to a halt in Sierra Leone and Guinea. Liberia restarted vaccinations efforts only in May.

From January to June, there were 850 measles cases in Liberia alone, and more than 500 children contracted whooping cough over a similar period. The reluctance of parents to bring their children to health facilities to receive the regular schedule of vaccinations has undermined immunization rates.

Malaria probably killed 10,900 more people in the three countries in 2014 than it would have done had the outbreak not happened, owing to the drop off in care1. Efforts to reduce maternal mortality rates in the countries — which already have some of the highest in the world — have faced a tremendous setback. An evaluation by the World Bank estimates that the loss of health workers to Ebola will increase maternal mortality by 38% in Guinea, 74% in Sierra Leone and 111% in Liberia. In other words, there may be around 4,000 extra deaths each year in the region2 if current levels of care continue.

Reinstating non-Ebola related health care, and re-establishing people's trust in it, is crucial to ending the epidemic — as well as to preventing a fresh wave of hardship for the people of West Africa. Without proper triage, people infected with Ebola may infect those who have a more treatable condition, such as malaria. Moreover, people with various diseases and conditions may avoid seeking care for fear of being infected with Ebola.

The departure in early July of French military medical teams from Guinea is worrying, as is the proposed withdrawal of Portuguese government teams supporting laboratory capacity in Guinea-Bissau. Internationally, efforts must be redoubled; United Nations agencies, foreign aid teams and NGOs should not yet pull out of West Africa.

Financial mechanisms being designed to combat future outbreaks, such as the World Bank's Pandemic Emergency Facility, should be deployed immediately to allow affected countries and neighbouring ones to bolster their epidemic response and preparedness. Neighbouring nations should be incentivized to do active surveillance without worrying about the potential economic impact of declaring cases. And if multilateral financial instruments are not ready, then developed economies such as the United States, Canada, the European Union and Japan, should fill the gaps. And preliminary results from a vaccine trial in Guinea, released on 31 July, are very promising3.

This year, I have been invited to participate in several expert panels focused on learning from this epidemic, to prevent history from repeating itself. Today, all the ingredients that enabled last year's devastation are still with us: rainy seasons, an uncoordinated response, fear and distrust. We need to push through the fatigue and complacency, and put everything we have learned into action to end this epidemic. We must finish the fight against Ebola.