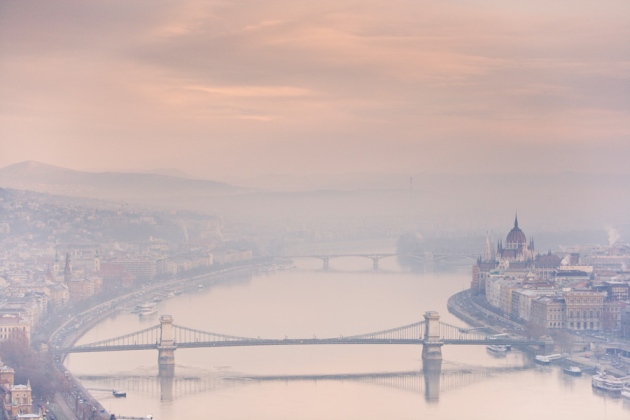 Smog — pictured here over the Danube river in Budapest — partially blocks out sunlight, affecting the amount of water that ends up in rivers.

Continuing industrialization in the twentieth century polluted air around the globe. But now, a study1 suggests that this process did not just affect people's lungs: it also swelled rivers. By blocking the Sun, aerosol pollutants slowed evaporation, leaving more water on the ground to fill river basins.

The analysis, published on 5 October in Nature Geoscience1, is the best evidence yet that air pollution can affect water resources through 'solar dimming'. An ironic consequence of the efforts to clean up the atmosphere is that the same measures could cause rivers to drop and reduce the availability of fresh water, say the authors.

The team discovered the effect by working with meteorological data from the twentieth century from much of North America, Europe and parts of Asia, where particles of materials such as sulphates from power plants, factories and agriculture clogged the air. In 1970s Europe, the amount of sunlight reaching the ground had fallen by more than 0.5% compared with the early twentieth century, according to some estimates. “Many have forgotten how bad the situation was then,” says Nicola Gedney, a hydrologist at the UK Met Office in Wallingford and the study’s lead author.

To determine whether aerosols were causing more water to end up in rivers instead of evaporating into the atmosphere, the team considered a number of factors that affect river flow. These include the Earth’s changing climate; the concentration of carbon dioxide in the atmosphere, which affects how quickly plants release their moisture; and changing vegetation due to development.

The team then plugged the historical data into a global computer model that calculated the flow through major river basins, and compared the outputs to historical measurements of river flow.

Their results showed that underneath the natural year-to-year changes in river flow, the presence of aerosols consistently increased the flow in basins across Europe and North America. In some major European rivers such as the Danube, the Elbe and the Oder, increases of 11–25% in total flow resulted from aerosols alone.

When Europe in the 1990s dramatically improved its air quality, the contribution from aerosols fell off by more than one-third, the team calculated. As regions continue to clean up the air, the amount of available fresh water in river basins could fall further, say the researchers.

However, some scientists note that the overall impact on water availability is hard to forecast because of the feedback loop between evaporation and rainfall. Gedney’s team does not account for this, because their approach uses rainfall as a historical input to the model — not an output, notes climate scientist Martin Wild of the Swiss Federal Institute of Technology in Zurich. He says that aerosols in the atmosphere could reduce evaporation so much that they weaken the water cycle, eventually leaving the rivers thirsty from a lack of rainfall.

That effect has been observed following major volcanic eruptions that inject ash into the atmosphere on a global scale, points out Alan Robock, a climatologist at Rutgers University in New Brunswick, New Jersey.

Given the various factors at play, says Robock, “I certainly wouldn’t suggest making the air dirtier.”

Still, rainfall aside, Robock thinks that the latest study provides solid evidence for the effect of aerosols on evaporation. He suspects that recent data from China, where industrial pollution continues to rise, would show an increase in river runoff, too.