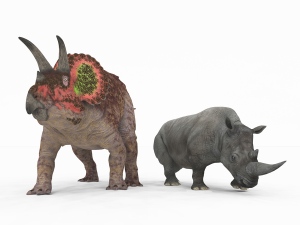 Studying modern mammals can provide insights into the metabolism of dinosaurs.

From museums to Hollywood films, dinosaurs are portrayed as highly active animals, but how they maintained this lifestyle isn’t clear. For decades, palaeontologists have debated whether the physiology of non-avian dinosaurs was akin to that of today's cold-blooded reptiles or warm-blooded mammals. An important clue has now been uncovered — not in Triceratops and its relatives, but in herbivorous mammals.

Palaeontologists have often examined bone microstructure in their investigations of dinosaur growth and physiology. Key to arguments on the subject are lines of arrested growth (LAGs) that represent an annual slowdown — typically tied to a cold or dry season during which resources are scarce. These rings are seen in dinosaurs, as well as in creatures such as lizards and crocodiles, whose body temperatures are regulated by the external environment, but have not often been observed in the bones of endotherms — creatures such as mammals that maintain high, constant body temperatures. But in a study published today in Nature1, palaeontologist Meike Köhler at the Autonomous University of Barcelona in Bellaterra, Spain, and her colleagues report that LAGs are present in ruminants from the tropics to the poles, greatly altering the context of the dinosaur-physiology debate.

Although LAGs have been found in mammalian bones before, Köhler notes, this is the most comprehensive study of the structures in modern mammals across a range of latitudes. The herbivorous, hoofed mammals all slow their growth when faced with harsh conditions. This is the best way to cope with a cold or dry season, Köhler says — “to shut down the energy demands of the body”. The slowdown produces LAGs, even in endothermic organisms, and is an ancient mechanism for coping with lean times.

Anatomist John Hutchinson of London's Royal Veterinary College says that the study “puts a nail in the coffin for the idea that mammals do not routinely exhibit LAGs as a natural part of their growth”. And Hutchinson agrees that the study may help us to better understand dinosaur physiology.

Although he notes that the argument over dinosaur physiology involves a number of factors — including histology and adaptations for rapid movement — Hutchinson says that Köhler's study provides additional evidence for dinosaur endothermy. “The growing weight of evidence has been winning over scientists, myself included, to the view that endothermy evolved quite early in dinosaurs and was inherited by birds,” he says.