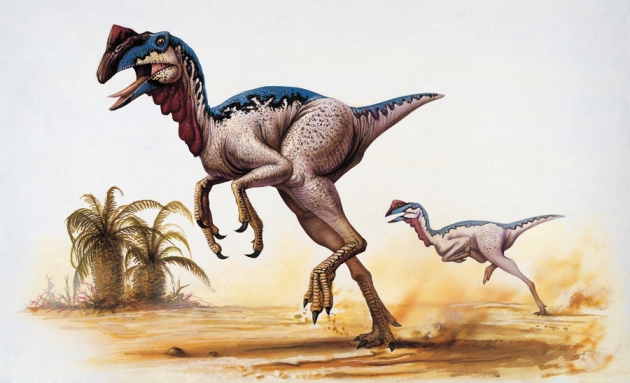 Possessing metabolic characteristics of both warm-blooded and cold-blooded animals could have given dinosaurs an ecological advantage.

Dinosaurs were neither sluggish like lizards nor high-energy like mammals, but something in between, a study suggests.

The work stakes out a rare middle ground in the long-running debate over whether dinosaurs were ‘cold-blooded’ ectotherms, which use the environment to adjust their internal temperature, or ‘warm-blooded’ endotherms, which regulate their body temperature from within. “There’s a third way,” says John Grady, a biologist at the University of New Mexico in Albuquerque.

Today, that middle ground is occupied by animals including tuna, lamnid sharks and leatherback turtles. Studying how those creatures control their body heat might help to reveal how dinosaurs did it millions of years ago, Grady says. Mesotherms burn energy from within to regulate their body heat, but not to a constant temperature as a mammal or bird would do. Tuna, for instance, stay up to 20 °C warmer than the surrounding water, except when they dive deep into colder waters, when their metabolic rate can also plunge.

To work out where in the metabolic spectrum dinosaurs lay, Grady and his colleagues compiled a database of growth rates in 381 animal species, including 21 dinosaurs. The analysis, published today in Science1, took data from earlier studies that estimated growth rates in a number of ways. For dinosaurs, that included techniques such as counting the number of growth rings in fossilized bone, to estimate an individual's age, and measuring the length of its bones, to estimate total mass. The animals ranged from slow-growing crocodiles to fast-growing horses.

Dinosaurs ended up mid-way along the scale, in a state that Grady's team dubbed mesothermy.

This ability to straddle the warm-blooded and cold-blooded worlds could have given dinosaurs an ecological advantage, Grady says. They would have been able to move around the landscape more quickly than a crocodile, but would require less food than a similar-sized mammal. “The fact that dinosaurs were pretty much dominant for 130 million years speaks to the fact that they had some special things going for them,” Grady says.

The fast metabolism of mammals and birds probably evolved over millions of years, mostly after the dinosaur mesotherms, says Stephen Brusatte, a palaeontologist at the University of Edinburgh, UK. Many modern birds hatch and grow to adult size in a matter of weeks, but the earliest fossil birds, such as Archaeopteryx, apparently grew much more slowly2.

The study is an important contribution to understanding how dinosaurs grew, says Gregory Erickson, a palaeontologist at Florida State University in Tallahassee. It revisits “how living animals grow in a much more rigorous manner”, he says, and “makes it possible to look at living animals and say which are the most like dinosaurs, which is pretty cool”.

Grady wants to test his ideas by studying dinosaur fossils from polar regions, such as Alaska. He hopes to compare isotope measurements in bones, which some say indicate the body temperature of the animal. Cold temperatures would have, in principle, exaggerated differences in the different types of thermoregulation, he says — making it easier to see how much energy each species burned.