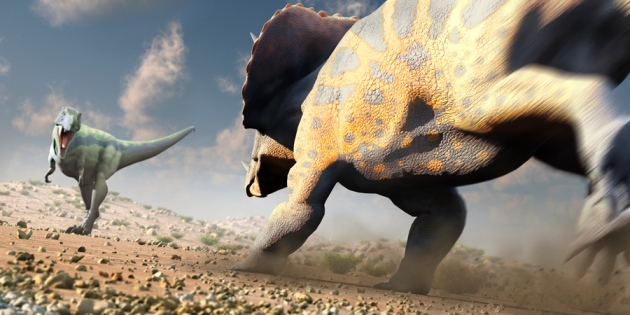 A cooling climate may have led to less diversity among horned dinosaurs such as Triceratops.

Just before a large asteroid slammed into the Earth 66 million years ago, the diversity of plant-eating dinosaur species declined slightly, a new study suggests. That minor shift may have been enough to doom all dinosaurs when the space rock hit.

The scarcity of plant-eaters would have left them more vulnerable to starvation and population collapse after the impact, with consequences that rippled all the way up the food chain.

“The asteroid hit at a particularly bad time,” says Stephen Brusatte, a palaeontologist at the University of Edinburgh, UK. “If it had hit a few million years earlier or later, dinosaurs probably would have been much better equipped to survive.”

Brusatte and his colleagues describe this nuanced view of the famous extinction in Biological Reviews1.

Palaeontologists have argued for decades about whether dinosaurs were doing well when the asteroid hit, or whether they were experiencing a worldwide drop in the number of species. To explore this question, the study pulled information from a database on global dinosaur diversity, including hundreds of fossils found in the past decade.

The scientists used analytical methods to account for the fact that some fossil-bearing rock formations are well-studied and others are not, which could distort the apparent number and distribution of dinosaur species. They found most dinosaurs thriving right up until the impact. “If we look at the global picture, we don't see evidence for a long-term decline,” says team member Richard Butler, a palaeontologist at the University of Birmingham, UK. “In no sense were dinosaurs doomed to extinction and the asteroid just kind of finished them off.”

But in North America, in the last 8 to 10 million years before the asteroid hit, two major groups of herbivores — duck-billed dinosaurs and the group of horned dinosaurs that included Triceratops — did decline slightly. In some places multiple species shrank to just one species. That may be because cooler climates changed the types of vegetation available to eat, says Michael Benton, a palaeontologist at the University of Bristol, UK. Plenty of dinosaur groups had recovered from such small population drops before, but not this time.

The latest study rounds up many of the discoveries of recent years, says David Archibald, a palaeontologist at San Diego State University in California. “From my reckoning much of it is pretty much spot on,” he says. “It is almost certainly the impact that kills off the dinosaurs.” But he disagrees with some of the data. In a review in press with the Geological Society of America3, Archibald compares several rock formations from near the end of the time of dinosaurs, in Canada and the United States. He finds that the two-legged, primarily meat-eating dinosaurs known as theropods were also declining.

Brusatte says that the differences boil down to how researchers account for how well-studied or well-preserved various fossil-bearing rocks are. “It’s really only now with all these new dinosaur discoveries that people are able to even think about the nuances in any kind of detail,” he says.

The extinction set the stage for the modern world, Butler notes. Although one lineage of dinosaurs survived as modern birds, mammals began their rise only after the dinosaurs were out of the picture. ”That may never have happened if dinosaurs had never gone extinct,” says Butler. ”It think it's very likely that if the asteroid hadn't hit, we would still have dinosaurs around today.”