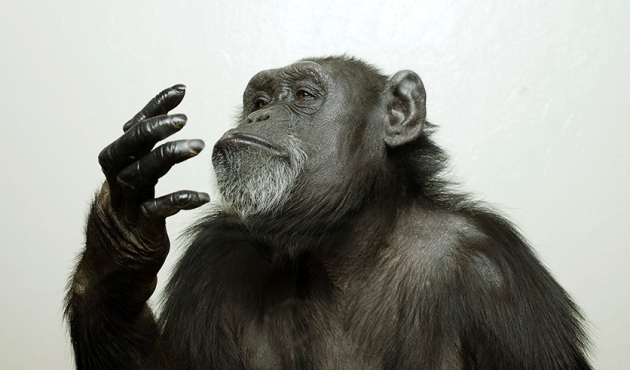 Decades of studies on chimpanzee brains and behaviour will be captured in an online resource.

Panzee the chimpanzee was a skilled communicator that could tell untrained humans where to find hidden food by using gestures and vocalizations. Austin the chimp was particularly adept with a computer, and scientists have been scanning the animal's genome for clues to its unusual cognitive abilities.

Both apes lived at a language-research centre at Georgia State University in Atlanta, and both died several years ago — but they will live on in an online database of brain scans and behavioural data from nearly 250 chimpanzees.

Researchers hope to combine this trove, now in development, with a biobank of chimpanzee brains to enable scientists anywhere in the world to study the animals’ neurobiology.

This push to repurpose old data is especially timely now that the US National Institutes of Health (NIH) has decided to retire its remaining research chimpanzees. The agency decommissioned more than 300 animals in 2013, but kept 50 available for research in case of a public-health emergency. Following an 18 November decision, this remaining population will also be sent to sanctuaries in the coming years. The NIH also hopes to retire another 82 chimps that it supports but does not own, says director Francis Collins.

“We were on a trajectory toward zero, and today’s the day we’re at zero,” says Jeffrey Kahn, a bioethicist at Johns Hopkins University in Baltimore, Maryland, who led a 2011 study on the NIH chimp colony for the Institute of Medicine.

The NIH’s latest move, along with a decision in June by the US Fish and Wildlife Service to give research chimps endangered-species protections, effectively ends the possibility of biomedical research on the animals in the United States.

NIH to retire all research chimpanzees

The retirement of the NIH chimps will also end non-invasive studies on the 139 NIH-owned animals at the University of Texas MD Anderson Cancer Center primate facility in Bastrop. Its director, Christian Abee, says that researchers have published more than 50 behavioural studies since 2012 using these animals. “There is no other alternative for cognitive research in chimpanzees,” he says.

That makes the NIH-funded chimp database all the more important. “This is a very unique window of opportunity to make sure that there’s a legacy and a contribution from the lives they have lived,” says project leader Chet Sherwood, a biological anthropologist at George Washington University in Washington DC.

In the next few months, Sherwood’s team plans to launch a website with a database for researchers and an educational component for the public. The site will eventually include existing data on the chimps’ performance in behaviour and personality tests, scans of the primates’ brain structure and activity, and their pedigrees and some genetic information. Sherwood and his colleagues plan to model the website on that of the Human Connectome Project, an open-access collection of brain scans from 1,200 individuals that researchers can use to study the links between brain structure and activity and human traits. 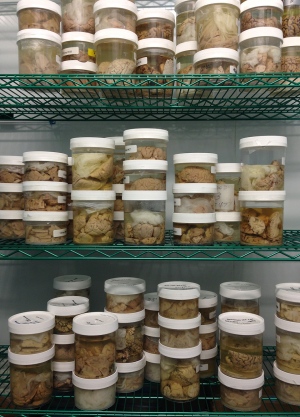 A chimp-brain biobank will help researchers to study the animals' neurobiology.

The team is also collaborating with the Allen Brain Institute in Seattle, Washington, to create an atlas of gene expression in the chimp brain. Researchers who want to study chimp brains in more detail can request tissue and blood samples from the team, which has nearly 250 preserved organs stored at facilities in Washington DC and Atlanta.

But some scientists and advocates worry about the consequences of losing access to research chimps. Frankie Trull, director of the Foundation for Biomedical Research in Washington DC, which advocates for animal research, says that the US government may regret its decision if a public-health threat emerges that would be best studied in chimpanzees. Others caution that the dwindling number of research animals will make it difficult to develop therapies — such as vaccines against Ebola — for wild chimps, which would help both the animals and human beings.

In the meantime, the NIH is struggling to find homes for its newly retired chimps. By law, retired animals are sent to a federal sanctuary known as Chimp Haven in Keithville, Louisiana, but that facility has only 25 places available now. Nearly 310 NIH-owned animals need to be resettled, and Collins says that the agency is still evaluating its options — a situation that worries lawmakers.

On 20 November, two members of Congress sent the NIH a letter asking the agency for its plan to rehome the remaining chimps. “We want to make sure that for the sake of taxpayers and these much-abused chimpanzees, these delays are overcome immediately,” they wrote.

Although retired, the apes of Chimp Haven may one day re-enter research labs — posthumously. Sherwood’s team is drafting an agreement with the sanctuary to obtain the animals’ brains when they die; it also hopes to acquire organs from chimps in zoos and research facilities. “You can imagine 20 years from now, this ageing population won’t be here,” he says. “If we weren’t making the efforts today, there wouldn’t be a way to study neurobiology in chimpanzees.”