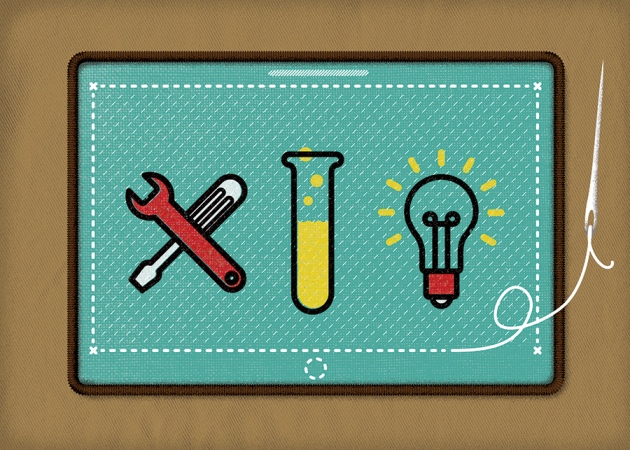 An initiative that uses colourful ‘digital badges’ to denote different contributions to research aims to standardize and simplify the often-fraught business of detailing who did what on a scientific paper.

Two publishers have begun assigning authors any of 14 badges that delineate the parts they played in a study: from a magenta ‘Resources’ one (for providing study reagents or instruments) to a red one for writing the initial draft. The badges, says Amye Kenall, associate publisher at BioMed Central in London, could help to minimize the politics of authorship lists, in which supervisors can gain credit for work done by their doctoral students. The project also aims to enhance collaboration by clearly demarcating each contributor’s specialities, she says.

On 28 September, the BioMed Central journal GigaScience added the badges to two of its published papers. Readers can click to see co-authors listed under multiple badges; the information is also coded in a format that allows computer programs to extract it, which makes it linkable to other online author profiles (such as the researcher identification system ORCID). Another London-based publisher, Ubiquity Press, is also adding badges to two of its published papers.

“In order for information around contribution to be meaningful and useful, it needs to be standardized,” Kenall explains. Many papers include author-contributions sections, but their formats vary, and they can be a vehicle for ambiguity — or insider jokes. In one of the papers with badges, author Keith Bradnam, a bioinformatician at the University of California, Davis, is described in the contributions section as having “herded goats”.

The concept has been developed by collaborating publishers, research funders and software firms (which have used digital badges for a few years as a visual sign of achievement). Several other publishers have expressed interest in implementing them, Kenall says, and initial feedback from researchers has been positive.

The 14 categories come from a related ‘digital taxonomies’ project, which last year brought together journal editors, funders and researchers to classify authors’ contributions as a set of standard roles.

The digital badges aim to classify the various parts played by contributors.

“We think it’s timely to have a bit more granularity around contributions to scholarly published work,” says Liz Allen, a co-founder of the digital taxonomies project. Accurately determining co-authors’ roles might also help with grant-funding applications, she adds, because applicants could be more explicit about research contributions.

The taxonomy is still in a rough format, but the badges project is not alone in implementing it, Allen adds. Cell Press, for instance, now offers researchers the option to use the taxonomy when submitting papers; so far, it has published two papers that do so — although without the badges.

But contributions to scholarly products may be too varied to be captured with a 14-part taxonomy, says Melissa Haendel, who develops systems for querying and classifying biological data at Oregon Health & Science University in Portland. Haendel co-chairs a working group as part of FORCE11, a community-driven initiative that aims to improve scholarly communication technologies and policies. The group is mapping out author roles, in part by using computer programs to search the text of author-contributions sections on papers.

A January workshop in Oxford, UK, listed more than 500 tasks that authors might want to be credited for, she says; examples include developing experimental protocols, taking photographs, developing validated surveys or providing lab reagents.

The badges that a researcher might collect could easily be extended, Kenall notes; extra categories could credit peer reviewers, for example. But for now, BioMed Central is focusing on collecting data about how often people click on the badges, before advancing conversations with funders, publishers and researchers about their practicality, and rolling out the badges to other journals.

“Unlike a CV or author-contributions section, badges provide a method of credit and transparency around contribution fit for purpose for a digital world,” Kenall says.