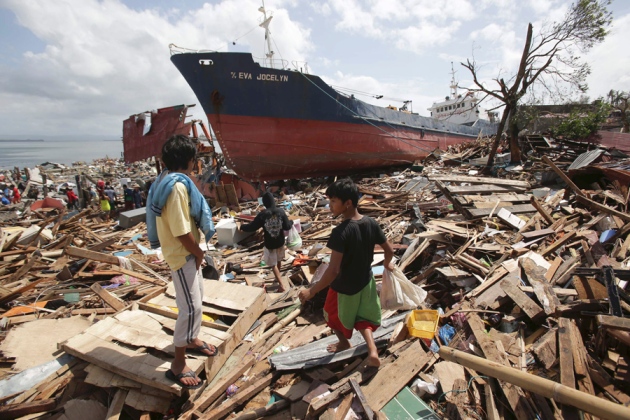 A large ship that washed ashore in Tacloban, the Philippines, on 10 November during Typhoon Haiyan — the most violent tropical storm on record.

As the Philippines assesses the havoc caused by Typhoon Haiyan, which according to some reports has killed as many as 10,000 people, speculation is heating up as to whether the disaster might be a manifestation of climate change. Speaking today on the first day of United Nations climate talks in Warsaw, the head of the Philippines delegation, Yeb Sano, said that he will stop eating until negotiators make "meaningful" progress.

But can the devastating storm be linked to the changing global climate? Nature wades into the evidence.

Was Haiyan the strongest storm ever measured?

It is the third time that disaster has struck the Philippines in less than 12 months. In August, Typhoon Trami caused massive flooding on the island of Luzon. And in December 2012, Typhoon Bopha killed up to 2,000 people and caused some US$1.7 billion in damage on the island of Mindanao. Haiyan could easily surpass that figure: its total economic impact could reach US$14 billion, according to a report by a senior insurance analyst at Bloomberg Industries, a data company in New York.

Haiyan's death toll might have been much bigger had so many people in the Philippines not heeded storm warnings and fled at-risk areas.

What’s the difference between a cyclone, a typhoon and a hurricane?

They are just different names for the same type of extreme weather phenomenon occurring in different parts of the world. These storms are called hurricanes in the Atlantic and northeastern Pacific oceans, typhoons in the northwestern Pacific and cyclones in the south Pacific and Indian Ocean.

Are such storms getting worse in a warming world?

This is the million-dollar question, but there is not yet a scientific consensus on how to answer it.

Storms receive their energy from the ocean, so it would seem logical that they would get stronger, and perhaps also more frequent, as the upper layers of tropical oceans get warmer. The potential intensity of tropical storms does increase with warmer sea surface temperatures. However, the effect of warming seas could be counteracted by the apparent increase in the strength of shearing winds — winds blowing in different directions and varying in strength at different altitudes. Shearing winds tend to hinder the formation of storms, or tear them apart before they can reach extreme strength.

On balance, many climate researchers think that it is plausible that tropical-storm activity will rise as the planet warms. There is some evidence1 that storm intensity has increased over the last three decades, but reliable data are limited to the north Atlantic, where observations are most abundant. In other places, the evidence is not yet conclusive2.

The Intergovernmental Panel on Climate Change (IPCC) in its latest report cautiously summarizes the current state of knowledge:

“Time series of cyclone indices such as power dissipation, an aggregate compound of tropical cyclone frequency, duration, and intensity that measures total wind energy by tropical cyclones, show upward trends in the North Atlantic and weaker upward trends in the western North Pacific since the late 1970s, but interpretation of longer-term trends is again constrained by data quality concerns.”

What are the models saying?

Global climate models are too coarse to resolve relatively small-scale atmospheric disturbances such as tropical storms — despite how prominently these phenomena feature on weather maps. Scientists therefore need to infer the effect of global warming on storm activity from general patterns of atmospheric circulation.

For example, hurricane researcher Kerry Emanuel of the Massachusetts Institute of Technology in Cambridge has used3 a technique to simulate large numbers of tropical cyclones in climate models. When applied to scenarios of historical and future climate described by six state-of-the-art climate models, his method predicted that both the frequency and intensity of tropical cyclones will increase during the twenty-first century in all tropical ocean regions, except the southwestern Pacific. Emanuel’s study was published too late for inclusion in the latest IPCC report.