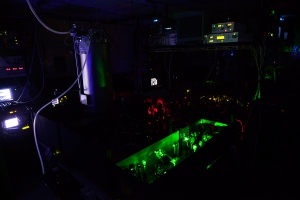 Today's Internet runs on linked silicon chips, but a future quantum version might be built from diamond crystals. Physicists report today in Nature1 that they have entangled information kept in pieces of diamond 3 metres apart, so that measuring the state of one quantum bit (qubit) instantly fixes the state of the other - a step necessary for exchanging quantum information over large distances.

Entanglement, which Albert Einstein called 'spooky action at a distance', is one of the weird phenomena that make quantum devices promising. A quantum Internet would use entangled photons travelling down fibre-optic cables to in turn entangle qubits, with the aim of one day providing super-secure communications, or delivering software and data to future quantum computers2.

The qubits themselves are analogous to the bits used in conventional computers, but can exist in a superposition of states, being both '0' and '1' at the same time (another aspect of quantum weirdness). Linked qubits could in theory zip through calculations that, on a classical computer, would take longer than the age of the Universe. Entangling them over a distance might allow unbreakable communication: for example, if the sender and the receiver of a message possess two sets of qubits that together provide an encryption key.

The technical feat of entangling qubits at a distance has already been achieved in other systems, including trapped ions and atoms. Although diamond is still playing catch-up, rapid progress has quickly elevated it to the A-list of candidates for quantum networks. “Connecting many qubits in diamond chips may be much easier than scaling up other systems,” says Ronald Hanson, a nanoscientist at Delft University of Technology in the Netherlands, who led the team that reported the results in Nature1.

Qubits in diamond depend on imperfections in the materials' carbon lattice. When nitrogen atoms substitute for carbon atoms, and appear next to gaps, or vacancies, in the structure, a qubit can be created based on the spin state of electrons held in the gap. Their fluorescence gives a faint pink tinge to the crystal.

To entangle qubits in separate pieces of diamond, the team uses lasers to entangle each qubit with a photon at temperatures of 10 kelvin. The photons meet midway through a fibre-optic cable, where they are themselves entangled. A slightly different form of that process was first applied to entangling ytterbium ions in 20073 and neutral rubidium atoms in 20124 (See also: 'Atom takes a quantum leap').

“It’s a quite beautiful technical demonstration,” says David Awschalom, a quantum physicist at the University of Chicago in Illinois, who has worked on qubits in diamond but was not involved in this study.

The process is not yet very efficient, says Lilian Childress, a physicist at McGill University in Montreal, Canada, and a co-author of the latest study. The researchers achieve entanglement only once in every 10 million attempts, or about once every ten minutes. But that is on a par with the first experiments in trapped atoms and ions, she adds.

One important goal of the technique is to provide the basis for so-called quantum repeaters, which would make long-distance quantum communications possible. Photon-based entanglement fades after a few hundreds of kilometres, because fibre-optic cable absorbs the light, and boosting the signal destroys the entanglement. But entangling chains of quantum repeaters could link qubits over longer distances.

Although ion and atom systems are more advanced than diamond in terms of linking close qubits for quantum computing, holding a record of 14 entangled qubits, diamond has distinct advantages for linking remote processors in networks, says Hanson. Unlike ions trapped in high vacuum, qubits in diamond can be maintained at room temperature, because the material’s surrounding carbon lattice shields them so well from stray magnetic fields or vibrations that might upset their superposition.

Researchers showed last year that diamond-vacancy qubits, which last for tens of milliseconds, can even be transferred to the nuclei of neighbouring carbon or nitrogen atoms, creating an array of ‘memory’ qubits that can exist for seconds5, 6 — an eternity in quantum-computing terms. Also, building assemblies of solid diamond chips sounds more approachable than creating hundreds of ion traps, says Hanson.

At this early stage, with quantum processors decades away, no one is ready to bet on which system will prevail. “You can't pick a winner right now,” says Joshua Nunn, a physicist at the University of Oxford, UK.