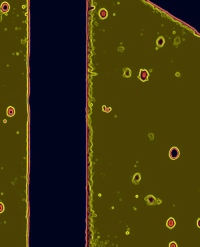 Diamond-based quantum devices can now make nuclear magnetic resonance measurements on the molecular scale. Work by two independent groups will make it easier to find out the structure of single biological molecules such as proteins without destroying or freezing them.

Nuclear magnetic resonance (NMR) and its close cousin magnetic resonance imaging (MRI) give information about a sample’s structure by detecting the weak magnetic forces in certain atomic nuclei, such as hydrogen. They work by detecting how molecules collectively resonate — like guitar strings that vibrate together — with electromagnetic waves of specific wavelengths. The techniques provide information about the structure of samples without damaging them — which is particularly important if the sample is a human body.

But to some researchers, whole bodies are less interesting than the molecules that they are made up of. “I want to push NMR and MRI to the molecular level,” says Friedemann Reinhard, a physicist at the University of Stuttgart in Germany. His team is one of two that have used NMR to detect hydrogen atoms in samples measuring just a few nanometres across1. The second team2 was led by Daniel Rugar, manager of nanoscale studies at IBM’s Almaden Research Center in San Jose, California. Both studies are published in this week's Science.

Probing single molecules a few nanometres wide has been a major frustration in NMR. The detectors need to be a similar size to the sample, and the magnetic coils usually used cannot easily be made smaller than a few micrometres.

NMR and MRI measurements on the nanoscale have been done using powerful nanomagnets in a technique called magnetic resonance force microscopy — but that only worked with very cold samples.

Rugar and Reinhard took a different approach. Both teams made diamonds with defects in their crystal structure — a single nitrogen atom next to a missing carbon atom, a few nanometres below the surface. This gives the diamond a red fluorescent glow, which can be bright or dull depending on which way the nitrogen’s electrons are spinning.

Reinhard’s team placed different kinds of samples onto their diamond, and watched how the nuclear resonance in them influenced the spinning electrons in the nitrogen. The researchers worked out that most of the signal came from a volume just 5 nanometres across inside the sample.

Rugar’s team did a similar experiment with an organic polymer, and probed a volume of about the same size. The researchers also fired radio pulses at their sample, which allowed them to manipulate the electrons of hydrogen atoms inside it. That was much more like a conventional NMR experiment, and provided more detail about the kind of molecule being probed.

“Our technique is purely passive,” says Reinhard, adding that the passivity makes it slightly easier to implement. But he notes that in the first approximation, the result is the same as with Rugar's experiment.

“Next, we want to translate this from detection into imaging,” says Reinhard. The idea would be to place a diamond crystal onto the tip of a scanning microscope, and see how the signal varies as the tip moves around, producing an image.

A commentary3 published alongside the studies predicts a more advanced application: imaging single molecules inside living cells. Diamond nanocrystals immersed in a cell's cytoplasm could essentially produce real-time films of the activity of single molecules, such as a protein folding, writes Philip Hemmer, a solid-state physicist at Texas A&M University in College Station.

“These are great experiments,” says Christian Degen, who studies spin physics and imaging at the Swiss Federal Institute of Technology in Zurich. He points out that it is very difficult to get the nitrogen defect in just the right place. “It’s been a long struggle to get there.”