Biochemist Matthias Hediger immediately saw the possibilities when his team discovered the protein SGLT2, which is used by the kidneys to soak up sugar from urine. Blocking the protein, he reasoned, would boost the loss of sugar from the body — a boon for diabetics with skyrocketing blood glucose levels. Furthermore, the mechanism would be independent of insulin, the hormone that regulates the absorption of sugar from the blood and the target for most diabetes drugs. “It was obvious it was important,” says Hediger, now at the University of Bern.

Pharmaceutical companies have shared Hediger’s enthusiasm in the 20 years since that discovery: a dozen are working to develop SGLT2 inhibitors. The drugs are expected to earn US$6 billion of the $47-billion global market projected for type 2 diabetes medications by 2022, according to Decision Resources, a market-research company based in Burlington, Massachusetts.

But the drugs must first get past a regulatory agency that is on high alert. The list of safety risks for diabetes drugs keeps growing, following scares over liver and cardiovascular side effects of some drugs. Several worries have enveloped SGLT2 inhibitors, even a promising drug called dapagliflozin, which faces a hearing before advisers at the US Food and Drug Administration (FDA) on 12 December.

“Safety issues have been a major cloud in diabetes drug development recently,” says Andrew Krentz, an endocrinologist at the Profil Institute for Clinical Research in Chula Vista, California, which specializes in diabetes and obesity. “The scrutiny has been particularly intense.”

Worldwide, 382 million people have dia­betes, a number that by 2035 is expected to climb to 592 million — almost 10% of the world’s present population, according to the Brussels-based International Diabetes Federation (see ‘A global epidemic’). That growth is driving the pharmaceutical frenzy, but it also amplifies safety concerns: with such a large patient base, even rare side effects can affect a significant number of people, especially given that drugs for this chronic disease must be taken for years. Also, patients with type 2 diabetes tend to be obese and are prone to a host of other conditions, including heart disease and some cancers. 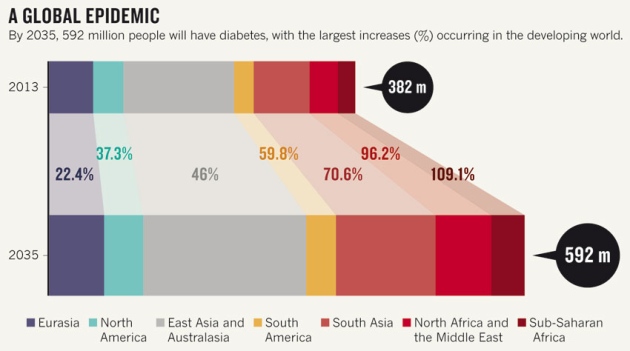 Since 2008, the FDA has required drug developers to conduct clinical trials to test the heart risks of new diabetes medications. The decision came in the wake of a scare over Avandia (rosiglitazone), a popular diabetes drug that boosts sensitivity to insulin and that became linked to heart failure and stroke eight years after it was approved for the market. Last month, the FDA exonerated Avandia, which is made by London-based GlaxoSmithKline, and rolled back restrictions on the drug’s use — but the experience, along with liver damage associated with a related medication, has left drug developers on edge.

Cardiovascular trials are expensive because they must enrol many patients and follow them for years to accrue enough heart attacks and strokes for statistical significance. Critics of the requirement fretted that it would stifle diabetes drug development. And that fear was bolstered in November when New York drugmaker Bristol-Myers Squibb announced that it was cutting its diabetes research efforts. But Sanjay Kaul, a cardiologist at Cedars-Sinai Medical Center in Los Angeles, California, says that since the 2008 FDA rule, companies have set up about 15 cardiovascular trials of diabetes drugs, involving some 115,000 patients. “To me, that is not a reflection of innovation being stifled,” he says.

The SGLT2 inhibitors have raised different concerns. In 2011, FDA advisers expressed worry over dapagliflozin, then leading the pack of SGLT2 inhibitors en route to market, after clinical trial data showed that patients taking the drug were more likely to develop breast or bladder cancer. The numbers were too small to reach statistical significance, but they were enough to convince the FDA to reject the drug in January 2012.

In July, the drug’s makers, Bristol-Myers Squibb and London-based AstraZeneca, submitted a new application with updated clinical-trial data, which will be discussed at this week’s FDA meeting. Although the nature of the data is not known, advocates point to several hopeful developments: in March, the FDA approved the first SGLT2 inhibitor, canaglifozin, and in April 2012, the European Medicines Agency approved dapagliflozin, despite the cancer link.

“The scrutiny has been particularly intense.”

But even if the concerns over SGLT2 inhibitors are allayed, many researchers do not think that they are a solution to one of the world’s most debilitating diseases. Kaul wants the FDA to stop approving diabetes drugs just because they lower blood sugar. Instead, he says, companies should prove that their drugs deliver real clinical benefits — reduced complications of the disease, such as kidney damage, amputations and vision loss. He notes that although blood-sugar reduction has been shown to benefit patients who have type 1 diabetes, the same has not been shown for those with type 2 disease.

And for David Nathan, director of the Diabetes Center at the Massachusetts General Hospital in Boston, the problem with SGL2 inhibitors is not so much their safety as their efficacy. The drugs lower blood sugar by less than half as much as some older drugs. He thinks that the real way to stem the diabetes epidemic might not be in lowering blood sugar, but in addressing excess weight.

But weight-loss drugs have been harder to come by than new diabetes therapies — and they are every bit as fraught with safety concerns. “That’s where the emphasis should be,” says Nathan. “But that’s been a sad story.”