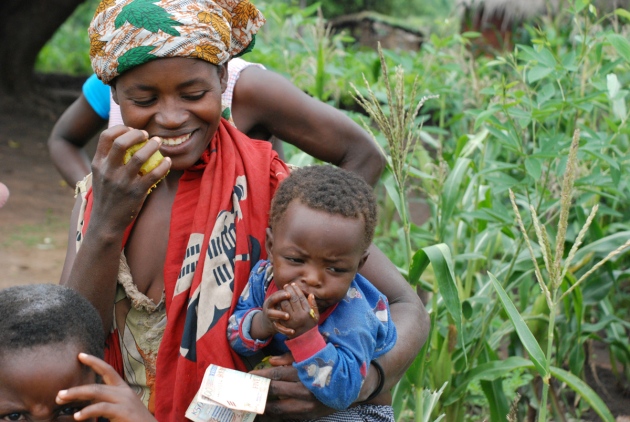 Children in Mwandama, Malawi, now have a better chance of living to the age of five.

For villagers in Mwandama, Malawi, visiting a health worker used to mean a daunting 40-kilometre round trip on foot. So the medical centre that was built in the area as part of the Millennium Villages Project (MVP) last year has improved their quality of life — and their health. Research published this week suggests that the MVP has significantly reduced infant mortality at sites across Africa.

But some researchers have questioned the methods used to quantify the benefits of the project, and demanded that the MVP release its underlying data. “The core of the problem is lack of transparency and careful, independent analysis,” says Michael Clemens, a migration and development researcher at the Center for Global Development, an independent research institution in Washington DC.

The MVP, which is spearheaded by Jeffrey Sachs, an economist at Columbia University in New York, aims to lift some of the poorest people in Africa out of poverty and improve their standard of living by boosting health and food security. It intends to help villages at 14 sites across Africa to reach the United Nations’ eight Millennium Development Goals (MDGs) by 2015.

Sachs says that many aid projects see limited success because they focus on one area at a time. By contrast, the MVP tackles all the root causes of poverty at once. For example, it simultaneously provides free fertilizer and seeds, builds schools and gives business training to farmers. Funded by cash and in-kind contributions from governments, industry and aid donors, the project is growing in influence. The government of Cameroon is planning to start a similar scheme, for example, using funding from Japan and the UN to boost economic and employment opportunities for 50,000 villagers.

Research published in The Lancet (P. Pronyk et al. Lancet http://dx.doi.org/10.1016/s0140-6736(12)60207-4; 2012) now offers quantitative evidence of the success of the MVP model at nine Millennium Village sites in sub-Saharan Africa, including Mwandama (see ‘Health targets’). Between 2006 and 2009, mortality in under-fives fell by an average of 22%, reaching a level roughly two-thirds of that in control villages not involved with the project, where child mortality seemed to rise. 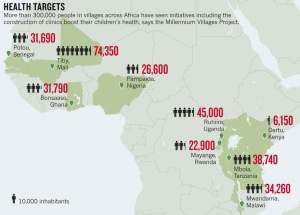 In rural areas nationwide, under-five death rates fell by an average of 2.6% each year over the course of a decade — a stark contrast with the Millennium Villages’ average of 7.8% for each year of the study. “The consistency with which child deaths went down and the size of the drop was surprising,” says Paul Pronyk, director of monitoring and evaluation for the MVP at Columbia, and lead author of the paper.

But Clemens says that these headline figures are misleading for a number of reasons. He points out that the control-village data include retrospectively estimated figures that are probably too high. And nationwide improvements in child mortality over the three years of the study were almost as good as in the Millennium Villages, he says, so it is unfair to compare the project’s success with a more gradual decadal trend. Furthermore, deriving trends from children monitored in a few villages for just three years introduces significant statistical uncertainty, he argues.

Using figures in the paper, Clemens calculates that the study authors can be confident only that the annual rate of decline for child mortality in the Millennium Villages lies between 1.4% and 14.3%. “If you claim to triple rates of decline you must have the evidence to back this up,” he says.

Clemens calls on the MVP to make its raw survey data available for independent scrutiny. He also questions the MVP’s stated cost of US$120 per person per year, saying that it is an under­estimate because it neglects indirect costs, such as the services of nearby non-governmental organizations.

Pronyk says that the mortality rates are meant to be “illustrative” of general improvement in child health, and he stands by the estimated budget. The MVP makes raw data available when requested by journals, and shares them with external partners, he adds. A Millennium Village scheme starting up in Ghana will be evaluated by independent researchers on behalf of the UK government’s Department for International Development, which may help to settle the debate.

Some development experts query how widely the Millennium Village concept can be applied. Stephen Carr, an agriculture and development consultant in Zomba, Malawi, says that schools in the Millennium Villages currently attract the best teachers in the country, boosting children’s educational attainment. If such projects become more widespread, they will not have the resources to reach such great heights, he warns.

Pedro Sanchez, an agricultural scientist and co-director of the MVP at Columbia, argues that “scaling up is the business of governments”. His project’s goal is to establish proof of concept and demonstrate that villages can achieve the MDGs with appropriate resources.

Boosting opportunities in even one school is better than in none at all, adds Andrew Daudi, team leader and science coordinator for the MVP in Mwandama, who is optimistic about the children being educated at the new primary school there. “Some of the children here are the best in Malawi,” he says. “The children we educate today will be able to take over the country later.”

The Millennium Villages Project (MVP) has now withdraw the claim that child mortality dropped three times faster in Millennium Villages compared to the national average. The MVP published a notice on 18 May accepting that this and some other claims it had made in the Lancet paper were erroneous.