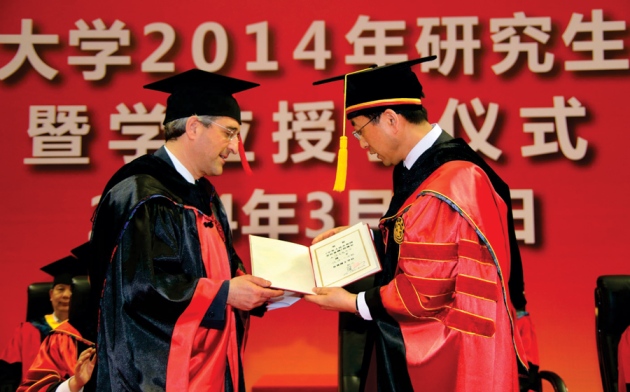 China's economic growth is slowing after 35 years of rapid expansion. Sustainable development depends on converting that growth into innovation. So the Chinese government has substantially increased its investment in universities and research institutes. In 2012, for example, it spent more than 1 trillion renminbi (US$161 billion) on research and development and more than 700 billion renminbi on higher education.

As a result, research capacity and productivity have grown. Between 2005 and 2012, the number of full-time-equivalent researchers in China increased by 38% (to 314,000). Over the same period, the number of published research articles from Chinese higher-education institutions rose by 54% (to 1,117,742) and granted patents went up eightfold (to 66,755).

Yet the quality of research, as indicated by citations, lags behind, and technology transfer is sluggish. Ossified practices in evaluation and incentivization — such as rewarding publication quantity over quality — are holding Chinese universities back.

As president of a Chinese research university, I believe that building a high-quality faculty is the key to developing a world-class research university. In the past ten years, my institution, Shanghai Jiao Tong University (SJTU), has created a culture of innovation and boosted research capacity through reforms to career paths for existing and new faculty members.

China's leading universities are taking steps to enhance their research productivity. Setting up new institutes, hiring high-profile overseas scholars at high salaries and introducing tenure systems are proven shortcuts to excellence. But importing a handful of 'star' professors is not sufficient to change university culture. Indeed, they can make local faculty members feel overlooked. Instead, fundamental reforms are needed.

My experience at SJTU presents a good worked example. We have implemented a university-wide incentive system to motivate all faculty, staff and students. The goal is to develop a high-quality faculty comparable to that of the best Western universities by 2020.

The changes began in 2007 with an analysis of future national and global challenges, open discussions among faculty and staff, and a feasibility review. Priorities emerged, including engaging creative minds, incubating innovations and bridging the sciences and humanities to best serve the nation and the world. To maintain faculty support, fundamental reforms were adopted in stages over several years.

First: recruit and mentor junior staff. World-class scientists were hired to build research groups focused on cutting-edge science and engineering problems and to set a high bar for academic performance. Junior faculty members were recruited competitively in the international job market. Generous start-up funds supported the groups for the first few years, until they could attract funds from Chinese government agencies or industries, start to produce results and establish their reputations.

A tenure system for new faculty members began in 2007. A six-year tenure track was set up for new junior faculty based on mid-term and final evaluation by an international committee.

In 2008, we launched a mentoring system for junior faculty under 35 years old. And since then, 1,251 junior faculty members have won extra support for their research, housing and living costs from a 150-million-renminbi endowment. 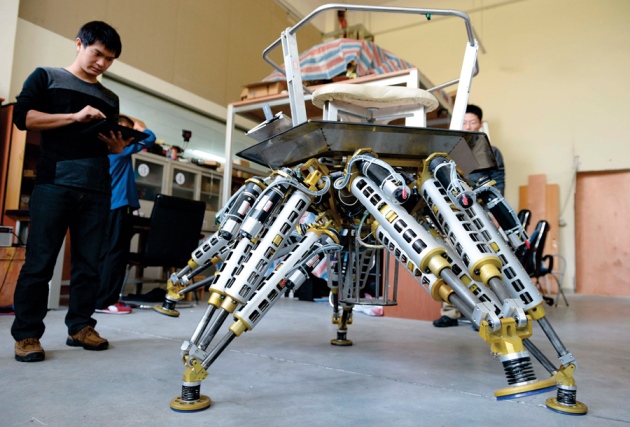 A robot developed by the School of Mechanical Engineering at Shanghai Jiao Tong University in China.

Second: three career tracks for faculty. Promotion and salary are assessed every three years against performance indicators developed by each school or department. Three career tracks — teaching, research and tenure — were created in 2010 for existing faculty. The teaching track has no research expectation; scientists with no teaching obligation must make up part of their income from competitive research grants. Tenure-track professors teach and do research and are evaluated according to combined criteria.

Each track has similar starting salary scales. Faculty members chose their own track, with the option to switch later if peer evaluations allow. All faculty may apply for transfer to the tenure-track system as standards rise; the best will be encouraged to do so. The average salary for faculty has increased by 60% in the past four years, and will rise further in the next four years.

The university decentralized its governance to give schools and departments more autonomy to recruit, develop and evaluate their staff. Budget reforms have given each school or department direct access to resources.

Third: one merged tenure system. The infusion of fresh academic blood gave the university a split nature: international scholars on the Western tenure path; existing faculty following the three tracks. In 2013, six pilot schools or departments began to merge the two paths into a single tenure system similar to that of North American universities. Encouraging results have already been seen in physics, mathematics, mechanical engineering, biomedical engineering, law and management.

On the basis of these experiences, the entire university will switch to the tenure system between 2015 and 2018. Although it is impossible to suddenly double or triple the salary scale for all 3,000 faculty members, mechanisms for paying competitive salaries within the tenure system are being built, such as setting up chairs and fellowships from a 500-million-renminbi endowment.

Faculty members who do not qualify for the tenure track can choose to leave or remain in the contract system until it is phased out by 2018. It is important that faculty who have served the university well but cannot meet the new standards be treated fairly and with respect and provided with a channel to continue to serve the institution. 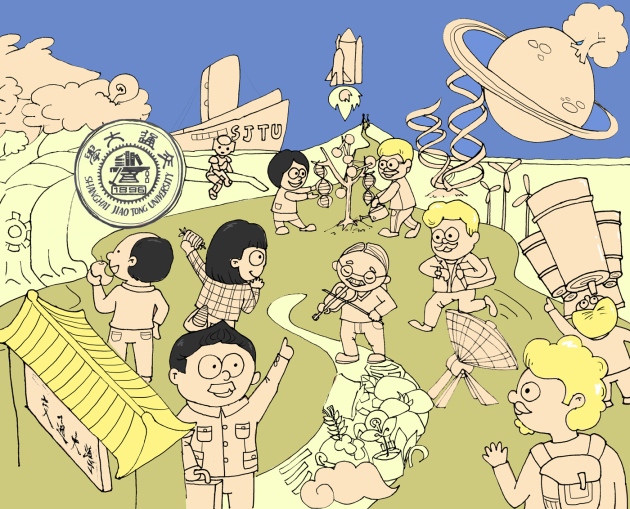 The transformation of Shanghai Jiao Tong University illustrated by its students.

Today, SJTU is well on its way to being one of the leading research universities in the world. Since 2007, 450 world-class professors and top-tier young faculty members of international standing have joined the university, and more than 250 existing faculty members have transferred to the tenure-track system. Eighty-five per cent of faculty hold PhDs (up from 50% in 2006).

The university's annual revenue has more than doubled since 2007, to more than 7 billion renminbi; competitive research income has tripled to more than 2.5 billion renminbi. The number of disciplines offered at SJTU that are ranked in the global top 1% of Thomson Reuters' Essential Science Indicator (ESI) jumped from 5 in 2007 to 16 in 2014. Social sciences joined engineering, and natural, life and medical sciences in the top 1%, making the university more comprehensive.

In terms of number of papers published, the university has ranked second globally in engineering since 2007. ESI ranked natural sciences 40 in 2013, up from 57 in 2007. Life sciences and agriculture rose to 43 from 136, and medicine is now ranked 27, up from 166. Citations are up and more discoveries are being patented.

The reforms at SJTU have promoted a shift in educational emphasis. We are moving away from knowledge transfer to knowledge creation and from instruction-centred teaching to student-centred learning. Our philosophy has changed to nurturing students to be engaged, competent global citizens. A culture that values and rewards innovation has successfully taken root.