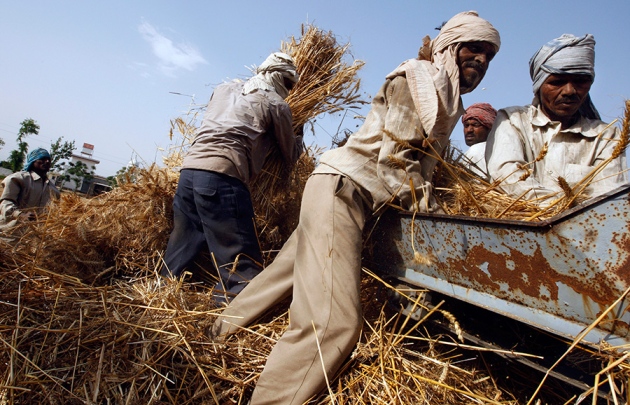 Wheat in northern India could be threatened by an outbreak of fungal disease in Bangladesh.

Update: On 26 April, a team led by microbial population geneticist Daniel Croll, who is at the Swiss Federal Institute of Technology in Zurich, reported on github.com that the Bangladeshi wheat-blast strain is closely related to those collected in Brazilian wheat fields and on nearby weeds. His team’s analysis, which uses the data on the website Open Wheat Blast, reveals that the sample is not closely related to known rice-blast-causing strains of M. oryzae. Croll’s team concludes that wheat blast was probably introduced to Bangladesh from Brazil, and warns that other Asian countries that import Brazilian wheat, including Thailand, the Philippines and Vietnam, should be on the lookout for the disease.

Fields are ablaze in Bangladesh, as farmers struggle to contain Asia’s first outbreak of a fungal disease that periodically devastates crops in South America. Plant pathologists warn that wheat blast could spread to other parts of south and southeast Asia, and are hurrying to trace its origins.

“It’s important to know what the strain is,” says Sophien Kamoun, a biologist at the Sainsbury Laboratory in Norwich, UK, who has created a website, Open Wheat Blast (go.nature.com/bkczwf), to encourage researchers to share data.

Efforts are also under way to find wheat genes that confer resistance to the disease.

First detected in February and confirmed with genome sequencing by Kamoun’s lab this month, the wheat-blast outbreak has already caused the loss of more than 15,000 hectares of crops in Bangladesh. “It’s really an explosive, devastating disease,” says plant pathologist Barbara Valent of Kansas State University in Manhattan, Kansas. “It’s really critical that it be controlled in Bangladesh.”

After rice, wheat is the second most cultivated grain in Bangladesh, which has a population of 156 million people. More broadly, inhabitants of south Asia grow 135 million tonnes of wheat each year.

Wheat blast is caused by the fungus Magnaporthe oryzae. Since 1985, when scientists discovered it in Brazil’s Paraná state, the disease has raced across South America.

The fungus is better known as a pathogen of rice. But unlike in rice, where M. oryzae attacks the leaves, the fungus strikes the heads of wheat, which are difficult for fungicides to reach. A 2009 outbreak in wheat cost Brazil one-third of that year’s crop. “There are regions in South America where they don’t grow wheat because of the disease,” Valent says. Wheat blast was spotted in Kentucky in 2011, but vigorous surveillance helped to stop it spreading in the United States.

In South America, the disease tends to take hold in hot and humid spells. Such conditions are present in Bangladesh, and the disease could migrate across south and southeast Asia, say plant pathologists. In particular, it could spread over the Indo-Gangetic Plain through Bangladesh, northern India and eastern Pakistan, warn scientists at the Bangladesh Agricultural Research Institute (BARI) in Nashipur.

Bangladeshi officials are burning government-owned wheat fields to contain the fungus, and telling farmers not to sow seeds from infected plots. The BARI hopes to identify wheat varieties that are more tolerant of the fungus and agricultural practices that can keep it at bay, such as crop rotation and seed treatment. 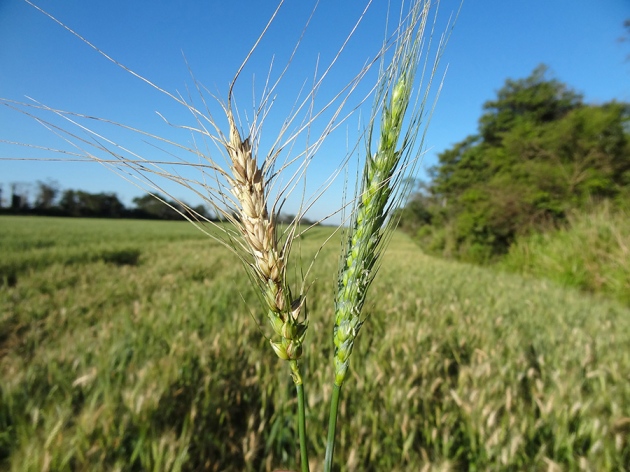 Wheat blast strikes the heads of wheat, which are difficult for fungicides to reach.

It is unknown how wheat blast got to Bangladesh. One possibility is that a wheat-infecting strain was brought in from South America, says Nick Talbot, a plant pathologist at the University of Exeter, UK. Another is that an M. oryzae strain that infects south Asian grasses somehow jumped to wheat, perhaps triggered by an environmental shift: that is what happened in Kentucky, when a rye-grass strain infected wheat.

To tackle the question, this month Kamoun’s lab sequenced a fungus sample from Bangladesh. The strain seems to be related to those that infect wheat in South America, says Kamoun, but data from other wheat-infecting strains and strains that plague other grasses are needed to pinpoint the outbreak’s origins conclusively.

The Open Wheat Blast website might help. Kamoun has uploaded the Bangladeshi data, and Talbot has deposited M. oryzae sequences from wheat in Brazil. Talbot hopes that widely accessible genome data could help to combat the outbreak. Researchers could use them to screen seeds for infection or identify wild grasses that can transmit the fungus to wheat fields.

Rapid data sharing is becoming more common in health emergencies, such as the outbreak of Zika virus in the Americas. Kamoun and Talbot say that their field should follow suit. “The plant-pathology community has a responsibility to allow data to be used to combat diseases that are happening now, and not worry too much about whether they may or may not get a Nature paper out of it,” says Talbot.

The work could help in the Asian crisis, says Talbot. “What I would hope for out of this sorry situation,” he says, “is that there will be a bigger international effort to identify resistance genes.”

This story has been updated to include the findings of an analysis carried out by Daniel Croll's team.