A virtual journey from the Solar System to the Praesepe Cluster (M44), some 577 light years away, based on Gaia's 3D mapping of individual stars. Gaia also measured the velocities of some of the stars, represented here by arrows.

The European Space Agency (ESA) has released the largest, most detailed map yet of the Milky Way. It pinpoints the 3D positions of 1.1 billion stars, almost 400 million of which were previously unknown to science.

ESA’s Gaia space observatory mapped out the catalogue. The results are expected to transform what astronomers know about the Galaxy — allowing researchers to discover new extrasolar planets, examine the distribution of dark matter and fine-tune models of how stars evolve.

Hundreds of astronomers began to access the database as soon as it was made publicly available on 14 September, says Gaia project scientist Timo Prusti, who works at ESA’s European Space Research and Technology Centre in Noordwijk, the Netherlands. “My advice to the astronomical community is: please enjoy with us,” he said at a press conference in Madrid. Within 24 hours, more than 11,000 users had accessed the catalogue, ESA said, and independent teams have begun to post papers based on Gaia data on the preprint repository arXiv.

Gaia has already found more stars than researchers expected, which suggests that the Milky Way is slightly bigger than previously estimated, says Gisella Clementini, a Gaia researcher at the Bologna Astronomical Observatory in Italy.

But few new results were announced at the catalogue’s unveiling, because Gaia’s team was allowed to do only limited analyses before the data release — unusual for space observatories, whose mission scientists often have up to a year’s exclusive use of their data before sharing them with the world.

One notable result, however, is a measurement of the distance of the Pleiades1, a cluster of stars in the constellation Taurus that has been the subject of a long-running controversy. Whereas numerous measurements put the Pleiades cluster at a distance of about 135 parsecs (440 light years) from the Sun, Gaia’s predecessor, ESA’s Hipparcos mission, found it to be about 15 parsecs closer.

Gaia measured 134 parsecs, give or take 6 parsecs — suggesting that the Hipparcos findings were inaccurate. Anthony Brown, an astronomer at the Leiden Observatory in the Netherlands who chairs Gaia’s data-processing collaboration, stresses that the results are preliminary and that they could change once Gaia collects more data. (Ultimately, Gaia should be the first mission able to measure the distances of individual stars in the cluster, rather than an average.)

But there’s scant possibility that Gaia’s results will be corrected so much that they agree with the Hipparcos results, thinks David Soderblom, an astronomer at the Space Telescope Science Institute in Baltimore, Maryland. “It’s not impossible but it sure isn’t very likely at this point,” he says. “That, to me, is basically the answer.” Soderblom expects that the trouble with the Hipparcos measurement may have been in corrections made to account for the unusual brightness of stars in the cluster. 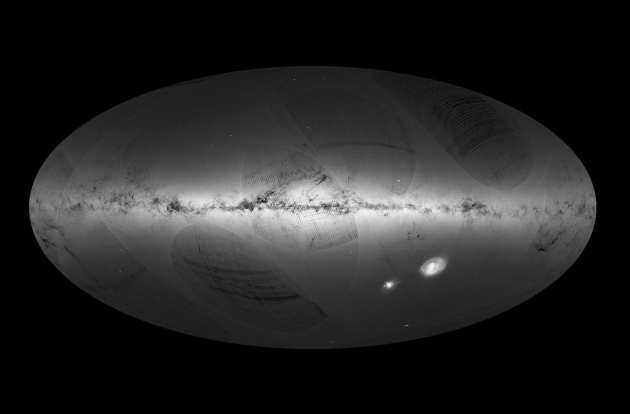 The Milky Way and its neighbouring galaxies are shown in this map based on Gaia satellite data: brighter regions indicate denser concentrations of stars.

Gaia launched in late 2013 and started its scientific mission in July 2014. The spacecraft cost €450 million (US$500 million), but the mission’s total cost, including the expense of operations and running data centres, is close to €1 billion. The preliminary catalogue released today is based on Gaia’s first 14 months of data-taking. Gaia does not take still exposures as ordinary telescope cameras do: instead, it constantly spins on its axis, making a full revolution every six hours and tracking the streaks that stars leave along its 1-gigapixel detector. 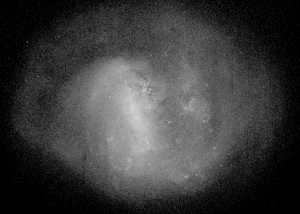 A reconstruction of the Large Magellanic Cloud based on Gaia data.

By comparing scans of the sky taken six months apart, researchers are able to triangulate and measure stars’ distances using the parallax effect, a technique that dates back to ancient Greece. In the first release of Gaia's catalogue, more than two million stars have been labelled both with measurements of their distances from the Sun and their motion, obtained by comparing Gaia data with those from Hipparcos. In future releases, the catalogue will grow to include the distances and velocities of more than one billion stars.

With more years of observation, Gaia’s measurements will become so accurate that the distances of many of the Galaxy’s stars will be pinpointed to within 1%.

“What Gaia is going to do is going to be phenomenal,” says Wendy Freedman, an astronomer at the University of Chicago in Illinois. “It will be the fundamental go-to place for astronomers for decades to come.”