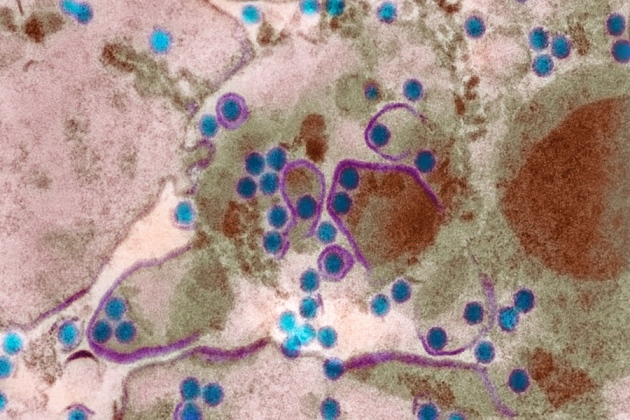 Testing a potential vaccine by giving healthy people a weakened form of the dengue virus—seen here as blue virus particles—could be the way forward for those fighting the disease.

Scientists have found what may be the strongest evidence yet that a vaccine can prevent dengue, by deliberately infecting volunteers with a weakened form of the disease-causing virus. This method of testing vaccines, known as ‘human challenge’, fell out of favour during the last century, but could be crucial for combating certain diseases, including Zika.

“This is a tremendous step forward, and something that has been desperately needed for 30 years,” says Duane Gubler, a disease researcher at the Duke NUS Medical School in Singapore who was not involved in the new study. The lack of human challenge studies, he said, has “actually been one of the things that has made the development of dengue vaccines very difficult.”

Concerns about the safety of deliberately infecting people have limited the use of human challenge studies. Researchers now generally test whether most vaccines work by vaccinating large numbers of people who were already at risk of contracting the disease concerned, and observing whether or not they were protected.

But deliberate infection has been used in some cases, for instance to develop vaccines against malaria.

Anna Durbin, a vaccine researcher at the Johns Hopkins Bloomberg School of Public Health in Baltimore, Maryland, and her colleagues explain in Science Translational Medicine how they used the strategy to test a dengue vaccine1. First, they injected 21 volunteers with the experimental vaccine, and 20 other volunteers with a dummy vaccine. Six months later, they injected all 41 volunteers with a weakened, ‘challenge’ version of the dengue virus — which usually causes symptoms similar to a mild dengue infection, such as a rash.

None of those vaccinated became sick from the challenge virus or showed the virus in their blood. By contrast, dengue virus was found in the blood of all of the volunteers who had received the dummy vaccine; 80% of them also developed a rash. Current dengue vaccines only protect a proportion of volunteers, so if these results hold up in larger populations the vaccine could be one of the most promising dengue vaccines developed.

“This is an incredible paper that shows what is absolutely necessary to develop a vaccine against the dengue virus,” says Scott Halstead, a virologist and vaccinologist at the Uniformed Services University of the Health Sciences in Bethesda, Maryland.

“It’s a really important demonstration of the kind of proof that you really need to have before you spend US$1.5 or 2 billion on a phase III [efficacy] trial,” he says.

From dengue to Zika

The dengue virus has proved a difficult vaccine target because it comes in four versions, or serotypes. The study published today tested only whether the vaccine prevented infection with dengue serotype 2 — the most difficult to protect against. Investigators have already begun a second human-challenge study to test whether the vaccine protects against dengue serotype 3, and they hope to go on to test it against serotypes 1 and 2.

The scientists who ran the study also hope to use the human-challenge strategy to speed the development of a vaccine against Zika virus, which is related to dengue.

Several groups are working on potential Zika vaccines. But it is unclear whether the vaccines can be developed in time to prevent the severe consequences of the outbreak that has now infected as many as 1 million people, and that may be causing birth defects, such as microcephaly, an abnormally small head.

“We are looking at strategies to accelerate that timeline, and we think that a Zika human-challenge model could be very useful in that endeavour,” says Durbin.

In the meantime, the Butantan Institute, a Brazilian research organization in Säo Paulo, began a large clinical trial of the dengue vaccine candidate on 22 February. The institute hopes to enrol 17,000 people over the next year to test the efficacy of the vaccine, which could be licensed by 2018. The Japanese pharmaceutical company Takeda, headquartered in Osaka, has also begun large efficacy studies of its own dengue vaccine candidate.

This gives veterans of the field, such as Gubler, hope: “For the first time in 50 years, I’m really enthusiastic and confident that we will have a vaccine, and we’ll be able to use the vaccine in the next few years.”