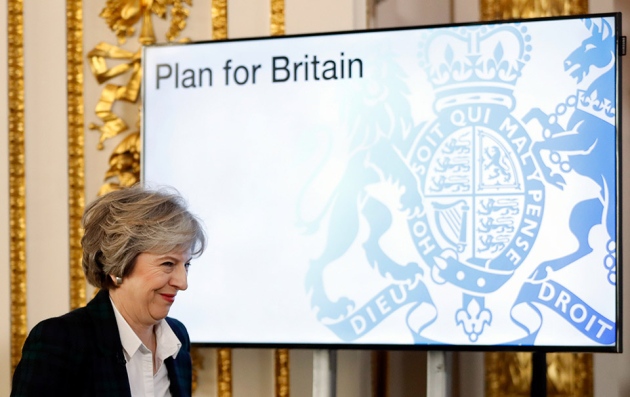 Britain's prime minister Theresa May delivers a speech on Brexit in January. Policy experts are worried about the status of science in decisions made as the UK leaves the EU.

Two government departments charged with managing the United Kingdom’s departure from the European Union have not yet appointed chief scientific advisers (CSAs) — and might not do so. That is starting to concern science-policy experts, who worry that scientists won’t be at the table when government makes key decisions on issues such as environmental protection and membership of international collaborations.

The United Kingdom has for years embraced the CSA model, in which highly qualified researchers are appointed to senior advisory roles and then embedded in government departments. But neither the Department for Exiting the European Union (DExEU) nor the Department for International Trade (DIT), both of which were created in the wake of the United Kingdom’s decision to leave the EU, has yet appointed, or committed to appointing, a CSA.

Last October, government ministers told a hearing of the House of Commons science select committee that DExEU was recruiting for a CSA, but this statement was later withdrawn. Then, in a letter sent to the committee on 3 February, DExEU minister Robin Walker said that the department is still considering whether it needs a CSA.

The letter came in response to questions from the select committee, whose chairman, Stephen Metcalfe, is concerned about a lack of scientific advice in DExEU. “I can’t really understand why there is such resistance to appointing a CSA,” says Metcalfe.

Metcalfe has also raised concerns about the broader CSA system. On 9 February, his committee sent a letter to the government’s CSA Mark Walport, who leads the network of departmental CSAs and is supported by the Government Office for Science. The letter notes the absence of CSAs in at least six departments, including DExEU and the DIT; apparent impending absence in a seventh and confusion over the role in an eighth (see ‘Scientfic advice’). It also expresses concern about the time taken to replace some CSAs.

The number of departments without a CSA does seem to have increased in recent years, although it has fluctuated. According to government websites, it was just three in 2011, dipped to two in 2012, but also reached the current high of six in 2015 before falling again last year.

Science-policy experts are paying close attention. “When you’ve got a lot of jobs lying vacant, when you’ve got really quite a lot of departments saying they don’t have a CSA and don’t have plans to have one, that really does start to raise questions about whether or not the government has reduced the emphasis it places on scientific advice,” says Graeme Reid, a science-policy researcher at University College London. “There does seem to have been an erosion of the role of the departmental CSAs,” adds Naomi Weir, deputy director of the Campaign for Science and Engineering in London.

The letter from Metcalfe’s committee calls on the government CSA — either Walport, who recently accepted a major new role overseeing UK funding, or his replacement — to bring the system back to full strength. The Office for Science says that it will reply to Metcalfe’s criticisms soon, and that the UK system for scientific advice is “internationally recognized” and “not just strong in its breadth across government but also in its depth”.

But Reid and Mike Galsworthy, programme director of the group Scientists for EU, which was set up to campaign against Brexit, say that the lack of a CSA at the DExEU might already have compromised how the government handled one scientific issue.

At the end of January, the government sent shockwaves through the physics community when it announced that the United Kingdom would leave the European Atomic Energy Community (Euratom) at the same time as its departure from the EU. This could jeopardize UK participation in the world’s largest fusion experiment, the International Thermonuclear Experimental Reactor (ITER) in southern France, and curtail operations at the Joint European Torus (JET), a nuclear-fusion facility in Culham, UK, that acts as a test bed for ITER. But the announcement was made in brief notes published alongside a parliamentary bill on Brexit.

“The Euratom fiasco is a clear case of where some science person in the core Brexit team could have averted the sudden crisis of confidence from the science community,” says Galsworthy. “This is the problem with not having a CSA on the inside who instantly gets how every action will ramify through the science community.”

Reid is particularly concerned about the lack so far of a CSA at the DIT, which will be responsible for negotiating international trade deals that the United Kingdom will have to forge with other nations after it leaves the EU. Although the public might associate these deals with tariffs, the deals also can determine the patents given to different drug types, levels of environmental protection or how genetically modified organisms are regulated. “All the substance of a trade agreement is underpinned by scientific detail,” says Reid. “That’s why it’s so important the Department for International Trade has a chief scientific adviser.”

DExEU declined to elaborate on whether and when it plans to appoint a CSA, beyond the 3 February letter. And the DIT has said only that it is working with Walport and his office to “provide advice on the specification for any such role”.