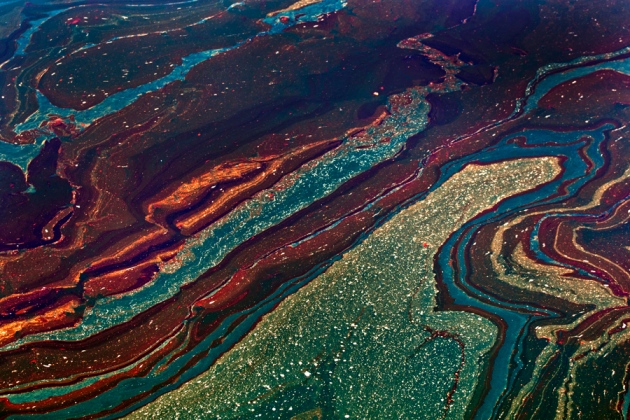 Oil floats in the Gulf of Mexico near Orange Beach, Alabama, in June 2010 — but part of the BP spill never made it to the surface and ended up on the sea floor.

More than one-third of the oil that spewed into the Gulf of Mexico during the 2010 Deepwater Horizon oil spill never made it to the surface. Scientists have been trying to locate the missing 2 million barrels since. Some have suggested that the oil was consumed by microbes or settled onto the sea floor.

A study published on 27 October in Proceedings of the National Academy of Sciences1 reports that a significant fraction of the spill was deposited in patches across at least 3,200 square kilometres of deep-sea sediments — an area as much as 20 to 100 times larger than previous estimates had suggested.

“They are accounting for a significant fraction of the oil that was kind of missing from the budget,” says Charles Fisher, a deep-sea biologist at Pennsylvania State in University Park. And although it is unclear whether the concentrations of pollutants on the sea bed have had a significant impact on the ecosystem — there is no precedent for such a large deep-sea leak — the team found circumstantial evidence of damage to life.

Soon after the explosion that killed 11 workers on the Deepwater Horizon rig and left  the Macondo well gushing for 87 days, researchers found evidence that a substantial portion of the oil was suspended in layers of deep ocean water in a form so diffuse that the water appeared clear. BP, the multinational oil company that was the primary operator of the deep-sea exploratory well, denied the finding, and US government agencies were slow to give it credence. But determining the fate of that trapped oil became crucial for understanding the ecological effects and legal repercussions of the spill. If the deep oil was mostly consumed and the remainder diluted enough, it would be benign. But if the oil persisted in sediments over a substantial area of sea floor, it could potentially pose serious threats.

The latest analysis became possible after the US National Oceanic and Atmospheric Administration last January quietly released a data set from thousands of sediment samples collected from the Gulf of Mexico during and after the accident. The data release is part of the ongoing Natural Resource Damage Assessment (NRDA), a process that US law mandates after major oil spills and that involves government, academic and industry scientists. Raw data from NRDAs are often made public before the official analyses of them; these typically appear only after the legal cases resulting from the disaster are resolved. (There has not yet been a public announcement on when that will occur.)

For the study, David Valentine, a marine geochemist at the University of California, Santa Barbara, and his team focused mainly on the organic compound hopane, a component of oil that is nonreactive and thus can serve as a long-term tracer for spills. On the basis of the NRDA data, the researchers were able to delineate an area of about 3,200 square kilometres in which concentrations of hopane were significantly higher than background levels. The hopane was not distributed evenly throughout this area but in a mosaic pattern. “I think it’s an extremely interesting pattern, and not really what we thought it would be,” says Valentine.

Some studies have suggested that significant oil contamination was limited to a much smaller area — but that may be because the patchiness of the higher concentrations made them easy to miss, Valentine says.

One possible contamination path was for the diffuse oil to spread in deep water layers at a hundred or more metres off the bottom and later collide with shallower seafloor on the continental slope. This would have contaminated sediments through direct contact — a hypothesis dubbed the dirty bathtub ring (see 'Dirty blizzard buried Deepwater Horizon oil'). The latest study supports this idea, with patterns of moderate hopane contamination at depths of 900–1,300 metres, where the deep-water layers of oil were detected.

However, the team found heavier contamination at depths of 1,600 metres — below where the diffuse oil was found — suggesting that oil somehow coagulated and sank, says Valentine, although the mechanism of that coagulation is unclear.

Other scientists have proposed the ‘dirty blizzard’ hypothesis, in which oil that has emerged to the surface forms clots with other organic material, and eventually sinks. But the hopane pattern Valentine and his colleagues found aligns better with prevailing deep-sea currents than with the spread of oil at the surface, suggesting that coagulation could have occurred at depth.

Overall, the researchers estimate that 4–31% of the oil trapped in the deep sea ended up in sediments within the contaminated zone. Chris Reddy, a study co-author and marine chemist at the Woods Hole Oceanographic Institute in Massachusetts, says that the research should help to guide those who have to respond to future deep-sea spills, for instance making the case that sediment samples should be collected further afield.

Valentine says that there probably were portions of contamination that NRDA expeditions missed because they were outside the sample areas. And both Valentine and Reddy say that mechanisms such as the dirty blizzard could still have been at play in other areas.

Valentine and his colleagues took steps to remove samples that might have been influenced by natural seepage, including samples in which hopane concentrations were elevated in deeper layers of sediment, suggesting some long-term input.

However, BP questions the analysis. “The authors failed to identify the source of the oil, leading them to grossly overstate the amount of residual Macondo oil on the sea floor and the geographic area in which it is found,” says BP spokesman Jason Ryan. Valentine says that he and his collaborators are doing further analyses, but that the patterns they found point to the well being the source of the oily sediment.

The work did not address biological impact directly, but the authors offer one case study: hopane concentrations were elevated in an area southwest of the wellhead, where other researchers reported damage from the oil spill to deep-sea corals2.

A crucial remaining question, Valentine and others say, is the role of the chemical dispersants that, for the first time in history, were injected directly into the oil flow at the wellhead. The goal was to break apart viscous oil and speed its degradation, but it is unclear to what degree the approach succeeded, or whether it caused damage. “The pattern we’re seeing may have been totally different if it weren’t for dispersants,” says Valentine, “But we don’t yet know enough to say anything about it.”

“The pieces of the puzzle are falling into place,” says Fisher, “but the remaining open questions are going to be really hard to solve.”