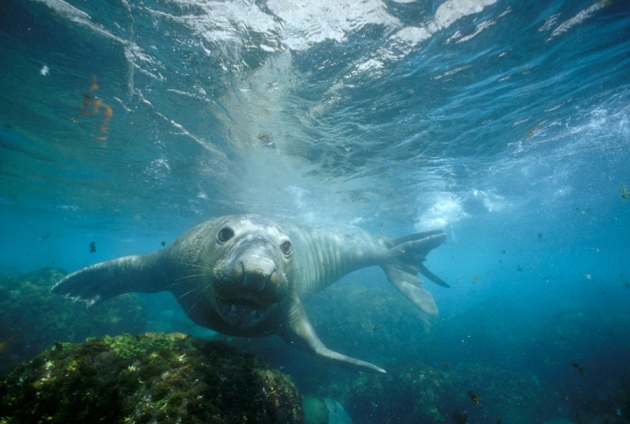 Elephant seals routinely dive to depths of 500 metres and stay underwater for 25 minutes at a time.

Blood samples from elephant seals may help to explain how carbon monoxide — a poison — can stop inflammation, researchers have found.

The seals routinely dive to depths of 500 metres and stay underwater for 25 minutes at a time, surfacing for just a few minutes between plunges1. During these forays, blood flow to nonessential tissues and organs is restricted, but the tissues are not damaged. Researchers at the Scripps Institution of Oceanography in San Diego, California, suggest that high levels of carbon monoxide in the seals' blood has a protective effect — echoing laboratory research on rats and mice that has found the gas has anti-inflammatory properties and can lead to better outcomes after organ transplant.

This unusual physiology was first observed in the mid-1950s by Lewis Pugh of the National Institute for Medical Research in London. Pugh monitored carbon monoxide levels in the blood of the men living in an Antarctic base to ensure that their stoves were not poisoning them. While there, Pugh also found surprisingly high carbon monoxide concentrations in the blood of Weddell seals killed to feed sled dogs2, 3.

In the 1960s, researchers discovered that mammals produce carbon monoxide when haemoglobin and myoglobin proteins in their cells degrade. Decades later, in the early 1990s, scientists realized that the gas — previously thought of only as a toxin — can be therapeutic at some concentrations. Experiments in animals including rats and mice have shown that inhaling carbon monoxide improves outcomes after organ transplants and heart attacks, and carbon monoxide treatments for organ transplants are beginning human clinical trials4. Yet the mechanism behind the gas's benefits remains unknown.

Now, in research presented this week at the Experimental Biology 2014 meeting in San Diego, California, seals return to the picture.

The levels of carbon monoxide in the seals' blood was comparable to that of “someone who is smoking more than 40 cigarettes a day,” Tift says. In nonsmoking humans, just 1–1.5% of haemoglobin is bound to carbon monoxide.

Tift thinks that the seals’ carbon monoxide levels and the gas’s therapeutic benefits in medical studies have a common explanation. Just as elephant seals restrict blood flow to their nonessential tissues during deep dives, blood flow is interrupted in humans during organ transplantation, stroke, heart attack and other injuries. In humans, when oxygen-rich blood floods back into tissues, it prompts an onslaught of chemical reactions that cause inflammation, cell death and even tissue necrosis. The seals have none of these effects.

“These animals are constantly holding their breath,” Tift says, “but they don’t have any injuries.” He proposes that elevated carbon monoxide may prevent damage from the returning blood flow.

“Carbon monoxide seems to slow the metabolism of the tissue,” says Leo Otterbein, a physiologist at Harvard Medical School in Boston, Massachusetts, who pioneered therapeutic uses of carbon monoxide. Slowing metabolism — and thus oxygen use — would delay or eliminate the formation of molecules that cause inflammation and cell death, he says.

The seals may provide a useful system to better understand how carbon monoxide works in the body to prevent problems, says Roberto Motterlini, a vascular biologist at the French medical research agency (INSERM) in Paris. Carbon monoxide may stimulate mitochondria production, he notes, something researchers could test in elephant seals.