An imaging technique presented today at the American Society for Cell Biology meeting in Denver, Colorado, promises to reveal the arrangement of up to 120 bacterial types that are crammed together in the human mouth. The method could help researchers and clinicians to solve the many health and environmental problems caused by biofilms — the  hardy, cooperative communities of bacteria that cover human teeth and are often resistant to antibiotics.

Genome-sequencing projects aim to catalogue the microbial residents of various environments, but they cannot reveal how the bacteria are physically arranged. “We've seen a lot of sequencing data that tells us what's there, but we don't have spatial information that goes with that,” says Phil Stewart, director of the Center for Biofilm Engineering at Montana State University in Bozeman, who was not involved in the work. 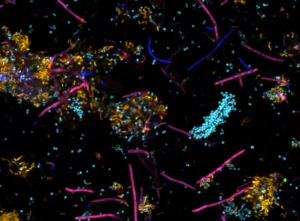 The CLASI-FISH technique allows scientists to visualize dozens of different types of bacteria in a biofilm.

And conventional microscopy techniques can identify only a handful of species at a time — a far cry from the hundreds of species in the human mouth. “This technique lets us see not just two or three organisms but dozens or possibly more,” says Stewart.

Alex Valm, a physicist at the Marine Biological Laboratory in Woods Hole, Massachusetts, and his colleagues developed the imaging approach as a way of dealing with these problems. “What our method does is let us find where the bacteria are and how they relate to each other, on the tooth surface and the gum,” he says.

Called CLASI–FISH, the technique combines combinatorial labelling and spectral imaging (CLASI) with fluorescence in situ hybridization (FISH), a method in which fluorescent labels, or probes, are attached to specific DNA sequences. Usually, FISH uses only a few colours at once, limiting the number of bacteria that can be visualized simultaneously. To overcome that problem, Valm and his colleagues developed the CLASI part of the technique, in which they label each bacterial type with two fluorophores, which allows for many more colour combinations — 6 different fluorophores can be paired in 15 ways, for example. But microscopists usually work with three or fewer fluorophores, as a greater variety means colours are more difficult to distinguish.To keep track of these additional colours, Valm and his colleagues used commercial ‘spectral unmixing’ software along with their own programs.

Earlier this year, Valm and his colleagues reported using CLASI–FISH and 6 fluorophores to identify 15 types of bacteria in plaque scraped off the teeth of their lab members1. Since then, they have written more sophisticated software that can detect 120 combinations using 16 fluorophores. The latest demonstration is a proof-of-principle experiment using cultured bacteria; the team is now developing probes and techniques for analysing human-derived samples.

Bacteria have very specific interactions, both with each other and with protein receptors on human cells, says Floyd Dewhirst, a bacterial geneticist at the Forsyth Institute in Cambridge, Massachusetts. “You need to visualize the spatial relationship to deduce these kinds of things,” he says. “CLASI–FISH is probably the most powerful technique for doing that.” Dewhirst, who maintains a database cataloguing the oral microbiome, worked with Valm to design DNA probes for specific bacteria.

Biofilms cause health problems by growing on teeth, in the body and on medical devices such as catheters, says Hansel Fletcher, a microbiologist at the Loma Linda University Medical Center in California who was not involved in the study. “You can now start to see the complexity of these communities," he says. "Just knowing what's there and the types of interactions can give us an insight into mechanisms biofilms may use to develop resistance to the host immune system and antibiotics.”

By bringing a better understanding to the basic architecture of biofilms — such as how so many different species can cram into such a small volume — this technique should lead to more effective ways of dealing with them, says Stewart. “Whether in an industrial pipeline or chronic wound, we want to push the ecology in a direction that makes it benign, not killing every germ in sight, which is where we are now,” he says.