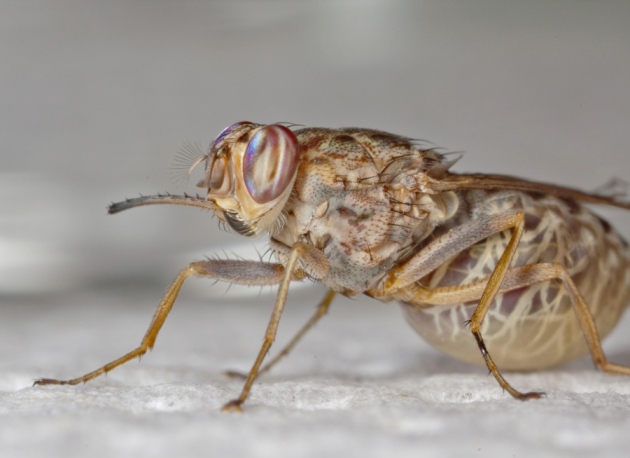 An estimated 70 million people remain at risk for sleeping sickness, which is carried by the tsetse fly.

Public-health workers are one step closer to stamping out a debilitating and potentially fatal disease known as sleeping sickness following the sequence of its carrier, the tsetse fly. The 366-million-base sequence of Glossina morsitans morsitans offers clues to the insect's diet, vision and reproductive strategies, researchers say.

“This really accelerates our ability to do basic research on this fly”, says lead author Geoffrey Attardo of the Yale School of Public Health in New Haven, Connecticut. The work was published today in Science1.

Tsetse flies carry protozoan parasites that cause sleeping sickness, also known as trypanosomiasis, in humans, and a similar disease (nagana) in livestock, in sub-Saharan Africa. Control measures such as trapping and killing the flies have helped to bring down the number of cases, but there is no vaccination, and an estimated 70 million people remain at risk of infection. The decoding of the genome will help researchers to hone in on specific characteristics of the fly and potentially lead to new or more effective ways to control the fly population, says Attardo.

G. morsitans has become the species of choice for researchers studying sleeping sickness, in part because its preference for animals makes it safer to study in the lab. Hence, much is already known about its biology and behaviour.

The genome helped expand that understanding, elucidating, for example, feeding behaviour. Unlike relatives such as mosquitoes and sand flies, which also feed on plant nectar, the tsetse fly feeds exclusively on blood. The authors — all members of the International Glossina Genome Initiative — now find that the tsetse has extra genes associated with the break down and tolerance of blood, and fewer linked to the metabolism of carbohydrates, a genomic signature of flies that feed on sugar.

Another known aspect of tsetse-fly biology is the insect's affinity for the colours blue and black, a trait used in the design of nets for trapping and killing the flies. But the biological mechanism for this preference has been unclear. The genome decoding provides some clues; it revealed the presence of genes that are associated with the eyes' ability to absorb certain wavelengths of light, including one for blue.

“An effective way to control disease in the field is to control the fly population,” says co-author Serap Aksoy, also at the Yale School of Public Health. One way to do this is to interfere with the insect's ability to reproduce. The female tsetse fly is unusual among flies in that it does not lay eggs, but rather nourishes a single larva in its uterus using a milk-like substance. Some of the proteins involved in lactation had already been identified2, but the authors found an unknown family of proteins that they suspect are involved in holding together the fat and liquid parts of the milk. Understanding how these genes work could help scientists to stymie milk production, thereby starving the growing larvae and causing them to be aborted.

Brian Wiegmann, an entomologist at North Carolina State University in Raleigh, lauds the Science study as a “whole-biology paper”. “It is the biology of the organism put into the context of the genome,” he says. Having spent the past ten years compiling the fly phylogenetic tree (specifically the order Diptera, which includes gnats and mosquitoes), Weigmann says that the tsetse genome will help him to understand the genomic underpinnings of the fly's various adaptations and how the flies diverged from other species.

Meanwhile, five more tsetse-fly genomes are in the works, including a riverine fly responsible for most human sleeping sickness infections. “This is the beginning of the process,” says Attardo.

An editorial, two historical perspectives, and eight research articles on the tsetse fly genome and biology also appeared today in multiple Public Library of Science journals. The research articles include, among other insights, further details on the newly identified family of milk proteins.