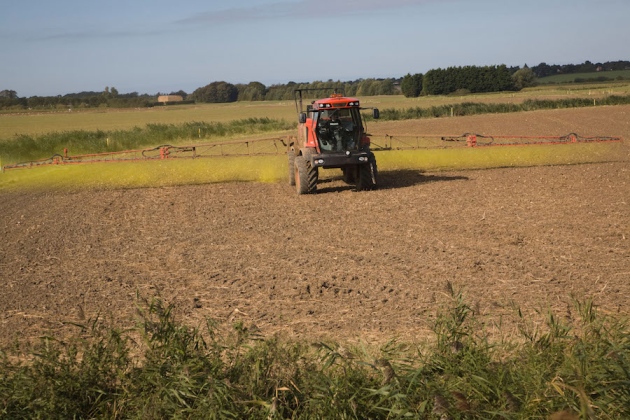 Glyphosate is the world's most widely-used herbicide ― here sprayed over an arable field in Suffolk, England.

The world's most widely-used herbicide, glyphosate, is unlikely to pose a cancer risk to humans, according to a report released by the European Food Safety Authority (EFSA) on 12 November1. Yet its finding comes nearly eight months after the International Agency for Research on Cancer (IARC) said that glyphosate probably does cause cancer in humans2.

How does EFSA's conclusion differ from that of IARC?

Back in March, however, IARC, the cancer-research arm of the World Health Organization (a United Nations agency) based in Lyon, France, said that although there is limited evidence that humans exposed to the herbicide are more likely to develop cancer, reports from animal studies have shown links between glyphosate and tumours in mice and rats, for instance. And the agency noted that there is “mechanistic evidence”, such as DNA damage to human cells from exposure to glyphosate. That led IARC to classify the herbicide as “probably carcinogenic”.

So EFSA thinks that glyphosate is safe?

Not entirely. EFSA revised existing limits on safe daily doses for exposure to glyphosate. It also proposes — for the first time in the European Union — that there should be a limit on how much glyphosate is safe for a person to ingest in a short period of time.

“We have more than 100 new studies that were not previously available for glyphosate,” says Jose Tarazona, head of EFSA’s Pesticides Unit. “We are saying it’s a higher concern than it was assumed to be.”

Why did the organizations reach different conclusions?

Firstly, the two bodies were not assessing exactly the same thing. EFSA looked only at glyphosate, whereas IARC looked at both the chemical itself and the products it is used in. EFSA says that some studies have shown genotoxic effects (DNA damage) from products containing glyphosate and some have not, and it is likely that some of these effects are down to other compounds in these products, rather than glyphosate itself.

The two agencies also have different approaches to risk assessment. “IARC is about the assessment of cancer hazard — that is, the likelihood that a chemical might, at least in some circumstances, cause cancer in humans,” says David Coggon, an occupational and environmental-health researcher at the University of Southampton, UK. “EFSA is concerned principally with whether there is sufficient confidence that a pesticide, when used according to the conditions of its approval, will not pose an unacceptable risk to human health or the environment.”

Finally, the two bodies looked at different evidence. EFSA assessed some studies conducted by industry groups that were excluded from the IARC analysis. The IARC team looked only at evidence that is in the public domain and available to independent scientists to review, says Kathryn Guyton, a senior toxicologist at the IARC and one of the authors of its glyphosate study2.

Tarazona says that EFSA’s team took the IARC assessment “very seriously”. But, he says, “based on different evidence we have a different conclusion.”

Are both agencies' processes robust?

EFSA has been accused of allowing non-published, industry-funded studies to sway it into what the environmental group Greenpeace called a “whitewash” of the potential harms of glyphosate. Meanwhile, industry groups broadly welcome the EFSA report and note that glyphosate has been deemed as safe to use by many regulatory agencies around the world, including the US Environmental Protection Agency. (California’s Office of Environmental Health Hazard Assessment, however, has recently suggested listing the herbicide as causing cancer, on the basis of the IARC report).

Those positions are the reverse of those held earlier this year, when green non-governmental organizations welcomed the IARC report and industry groups furiously attacked it — with biotechnology giant Monsanto saying it was “outraged” by the report.

Both Guyton at the IARC and Andreas Kortenkamp, a toxicologist at Brunel University London, say that they cannot always follow how EFSA came to its conclusions, because of unclear language.

“From the IARC monograph I see where they are coming from and how they evaluated it. The EFSA statements make this a little difficult,” says Kortenkamp. For example, one statement in the EFSA report — “no classification for mutagenicity is warranted” — is traced to a teleconference call and not otherwise explained, Kortenkamp says.

Tarazona rejects criticism of EFSA and says that its process is “very transparent”. He says that the agency publishes information on every study that it considers, which is equivalent to the information that would be published in a journal paper. “We have definite criteria and definite classification schemes,” he says. “Scientific excellence is the key element for EFSA.”

Guyton likewise emphasizes the transparency of IARC’s processes. “We have published criteria that scientists have to follow,” she says. “These criteria have been adopted as an international standard.”