A petition to ban the diabetes drug Victoza (liraglutide) has turned the spotlight onto studies that demonstrate its potential to cause pancreatic and thyroid cancer.

“We don’t just go after drugs casually,” says Sidney Wolfe, director of the health and research group at Public Citizen, a non-profit consumer-advocacy organization based in Washington DC, which sent the petition to the US Food and Drug Administration (FDA) on 19 April. “We only go after drugs when there is clear evidence of unique dangers or risks, and when there is no evidence of a unique clinical advantage.” 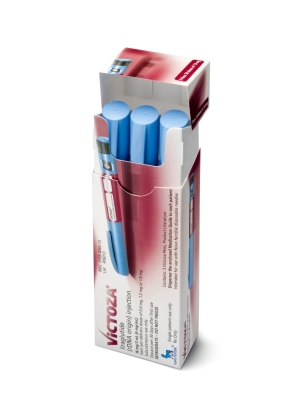 A consumer advocacy group has raised concerns about possible side effects of the diabetes drug Victoza.

Public Citizen says that Victoza has a number of possible side effects; of those, critics are most concerned about pancreatic cancer. Once that cancer spreads, a patient stands just a 1.8% chance of surviving for longer than five years.

The petition rests in part on the work of Peter Butler, an endocrinologist at the University of California, Los Angeles. For some years, his work has been fuelling a debate on Victoza and other drugs in the same class — but until now, that debate has been confined to diabetes investigators.

Victoza, made by Novo Nordisk of Bagsværd, Denmark, was approved by the FDA in 2010. It is the second diabetes drug to mimic the activity of a hormone called glucagon-like peptide-1 (GLP-1), which stimulates the release of insulin from the pancreas and ultimately lowers concentrations of glucose in the blood.

In some people, drugs that mimic GLP-1 may inflame the pancreas, causing pancreatitis — a risk factor for pancreatic cancer. In 2009, the FDA ruled that such drugs must be labelled with a warning about pancreatitis; Victoza carries that warning, as do Byetta and Bydureon, formulations of the GLP-1 mimic exenatide, made by Amylin Pharmaceuticals of San Diego, California. Wolfe says his concern extends to other diabetes drugs that alter the GLP-1 pathway, but there was stronger evidence to make a case against Victoza.

Since 2009, Butler and his colleagues have discovered that such treatments might affect the pancreas by activating GLP-1 receptor proteins, which in turn stimulate proliferation of precancerous cells. His latest finding1 is that human and rodent pancreases contain lots of GLP-1 receptors in areas in which cancer is thought to originate, and  mice that are genetically predisposed to pancreatic cancer develop the disease more quickly than usual in response to Byetta.

Butler hypothesizes that treatments based on GLP-1 might lead to pancreatic cancer in people with pancreatic abnormalities that might otherwise have remained dormant. Similarly, GLP-1 receptors inhabit thyroid tissue, which Butler says could account for cases of thyroid cancer that occurred during clinical trials of Victoza2.

“Butler has put together a hypothesis which is interesting and needs to be investigated,” says Edwin Gale, an endocrinologist at the University of Bristol, UK. “Pancreatitis may be just the tip of the iceberg, and it’s the iceberg that concerns me.”

On the basis of information plucked from the FDA’s adverse-event reporting database, Public Citizen counted 28 cases of pancreatic cancer reported between February 2010 and September 2011 among patients on Victoza, compared with just one case in a patient taking a diabetes drug that does not manipulate the GLP-1 pathway. And last year, Butler published a report in Gastroenterology3, in which he looked at FDA data from thousands of patients, and concluded that those taking Byetta developed pancreatic cancer 2.95 times as often as those on an unrelated diabetes medication.

Within days of Butler’s paper being posted online, Novo Nordisk wrote to the journal's editor-in-chief, criticizing the paper and its authors for publishing bad science. “If that article is taken out of context, it can do more harm than good if it’s picked up by the media, and people think, oh my god, this is dangerous and I need to get off this drug,” says Alan Moses, global chief medical officer for Novo Nordisk in Princeton, New Jersey.

Indeed, any conclusions drawn from the FDA’s adverse-event database are riddled with caveats. For example, the database does not indicate whether a patient was at particular risk for cancer before they took the drug. And because it has no information on healthy people, it is impossible for researchers to determine incidence rates accurately.

As for Butler’s rodent experiments, Moses argues that if pancreatic cancer were a risk, Novo Nordisk would have seen it in in-house animal studies. (A rare type of thyroid cancer did show up, prompting a warning on Victoza’s label.)

Butler says it is no wonder that Novo Nordisk bristles in response to his publications. “The global market for type 2 diabetes drugs is worth US$20 billion,” he says. “These drugs are the only ones that manufacturers have that are not off-patent, so if they disappear, they’d have nothing.” Global sales of Victoza reached $310 million last year.

Butler and others who use the FDA adverse event database admit that a strong case cannot be made with this information alone. Ideally, researchers would compare incidence of cancer in the thousands of patients taking Victoza or Byetta with that in those on non-GLP-1 diabetes drugs, but for now they can't, because comprehensive databases either don’t exist or can’t be accessed. Instead, Novo Nordisk has enrolled 9,000 people in a safety-monitoring study requested by the FDA.

Still, the study might not be large enough to detect pancreatic-cancer risks, according to Daniel Drucker, an endocrinologist at the University of Toronto in Canada. About 1 in 10,000 people in the United States develop pancreatic cancer each year, so the study would have to be enormous to reach statistical significance.“You need to follow close to a million people, controlled for as many variables as possible, to be able to have the statistical power to make any meaningful conclusin about possible changes in incidence rates of cancers like pancreatic cancer,” says Drucker, who consults for Novo Nordisk and other manufacturers of diabetes drugs. “It’s highly irresponsible to say on the basis of a mouse or rat study that a drug is safe or unsafe, and I wouldn’t use poor-quality case reports [from the FDA's adverse event database] to make assumptions either.”

Because there are other diabetes drugs on the market, Wolfe disagrees with waiting while thousands of people are followed for years. So far people have filled about 2 million prescriptions for Victoza in the United States; that number will increase rapidly if Novo Nordisk receives approval from the FDA to market liraglutide for obesity.

Butler agrees that waiting isn’t the only approach. “This story is a genie that’s escaped from the bottle because of Public Citizen, which is good because we need neutral people to repeat my experiments and to do other experiments,” he says. “I hope that I’m proven wrong because I’m not looking for people to get pancreatic cancer.”