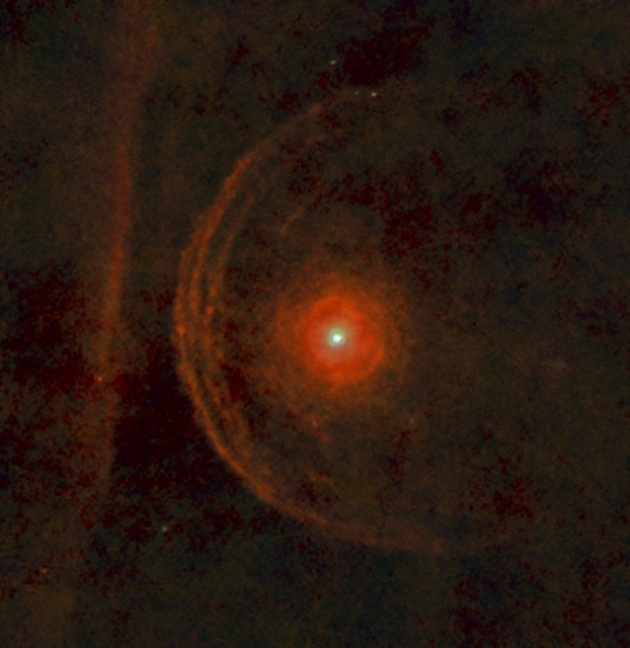 Betelgeuse is a red giant star, as the Sun will be someday.

New observations of the bright star Betelgeuse, famous as the shoulder in the constellation of Orion the hunter, raise fresh questions about how it blows huge amounts of gas into interstellar space.

Betelgeuse is a red giant near the end of its life, much as the Sun will be billions of years from now. Astronomers study Betelgeuse in hope of understanding the Sun's ultimate fate.

But “we now have a problem”, says Graham Harper, an astrophysicist at the University of Colorado Boulder. “If you’re going to eject matter you have to put energy in, and we’re not seeing that.”

Harper and his colleagues used the US–German Stratospheric Observatory for Infrared Astronomy (SOFIA), a 2.5-metre telescope that flies in a modified Boeing 747 aeroplane, to take Betelgeuse’s temperature. They found that the star's upper atmosphere was much cooler than expected — so cool, in fact, that it doesn’t seem to have enough energy to kick gas out of its gravitational pull and into space.

“This challenges all our theoretical models,” Harper said on 7 January at a meeting of the American Astronomical Society in Kissimmee, Florida.

When stars such as the Sun near the end of their lives, they balloon to huge sizes and begin shedding gas. Over the next million years, Betelgeuse will lose about one-quarter of its mass, but astronomers have not been able to explain where it is getting the energy to do that.

One idea is that strong magnetic fields within the star drive the outflows. But a 1998 Nature paper found that Betelgeuse’s temperature, when measured at radio wavelengths, was thousands of degrees cooler than would be expected if magnetic fields were at play, Harper says1.

“Now we’re looking at being a lot cooler than even that,” he says. “The fundamental physics is way off.”

In March, Harper’s team used an infrared instrument aboard SOFIA to study the light coming from Betelgeuse. The researchers measured the speed of gas flowing off the star’s surface, and calculated what temperature that corresponded to. Whereas the 1998 radio study found material flowing away at temperatures of 1,500–3,500 kelvin, the new SOFIA data found it to be as cool as 540 kelvin.

The cold infrared temperature causes problems for theorists trying to explain what is happening in the upper layers of Betelgeuse's atmosphere, Harper says. It not only seems to rule out magnetic fields as the reason for the shedding, it also challenges other possibilities such as radiation pressure from the star’s light, or some type of internal shock wave that drives stellar pulsations2. “We don’t know how the star evolved and we don’t know what it will consequently look like,” Harper says.

Other research presented at the meeting underscores how unstable Betelgeuse is. More than four decades of observations from small telescopes on the ground show that its light fluctuates in cycles that range from just over a year to many years, reported a team led by astronomer Ed Guinan at Villanova University in Pennsylvania.

At roughly 184 parsecs (600 light years) away, Betelgeuse is one of the closest red giants. When it explodes, perhaps several million years from now, it may shine as brightly as the full Moon. Not understanding the physics of this mysterious star, Harper says, means that researchers will struggle to understand the other red giants in the Universe.