When the US National Science Advisory Board for Biosecurity called for redaction of two papers on mutant strains of H5N1 avian influenza virus, one reason it cited was the high fatality rate of the wild virus1. But some virologists claim that the mortality rate — 59% in officially confirmed cases (see go.nature.com/3ys4py) — has been vastly overestimated.

In an opinion article2 published last month, Peter Palese and Taia Wang, virologists at Mount Sinai School of Medicine in New York, argued that the 59% figure was “driving this controversy”, but that it was “likely orders of magnitude too high”. Vincent Racaniello, a virologist at Columbia University in New York, told Nature that he believes any H5N1 pandemic would not come close to the 2–2.5% global mortality rate of the 1918 flu pandemic.

The virologists are reviving an old argument3 that the 59% rate, derived from officially confirmed World Health Organization (WHO) numbers of cases and deaths (see ‘Mortal danger’), does not take into account undetected cases or asymptomatic infections. 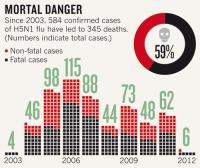 Since the current H5N1 outbreak began in 2003, researchers have done several sero­prevalence surveys looking for antibodies to the virus in people from outbreak areas. Racaniello and his colleagues say that some survey results imply that H5N1 infections are common and the fatality rate is low. But all other scientists contacted by Nature disagree.

Malik Peiris, a flu virologist at the University of Hong Kong, says that the higher seroprevalence rates seem to be outliers. One study found that 5.6% of people tested had antibodies against H5N1 (ref. 4). All of the others found much lower levels, and most found no detectable antibody.

“The consensus is that the rates are quite low, though not non-existent,” says Peiris.

Jeremy Farrar, director of the Oxford University Clinical Research Unit in Ho Chi Minh City, Vietnam, agrees. “Across southeast Asia we have not found much evidence of seropositivity,” he says. A review of H5N1 seroprevalence studies published last year5 also concluded that “transmission of the H5N1 virus from poultry to humans is rare”.

Racaniello says that the studies that found no or little seroprevalence “were simply done in the wrong populations”, and that more studies are needed.

Many scientists say that focusing on the exact numbers misses the wider picture — even if the fatality rate has been overestimated, the virus is still a severe pandemic threat. “I don’t care whether this virus has a case-fatality rate of 50% or 5% or 1%, it would still be a really big problem,” says Marc Lipsitch, an epidemiologist at the Harvard School of Public Health in Boston, Massachusetts.

In fact, although the true mortality rate of H5N1 is likely to be lower than 59%, the epidemiological data suggest that it would dwarf the 0.1–0.4% rate assumed in many countries’ pandemic preparedness plans, and could far exceed that of the 1918 pandemic. Robert Webster, a flu virologist at St Jude Children’s Research Hospital in Memphis, Tennessee, warns that the H5N1 virus is a fearsome pathogen. “You walk into a poultry house that has this virus and everything is dead,” he says. “If that sort of virus were to get into humans … my God.”