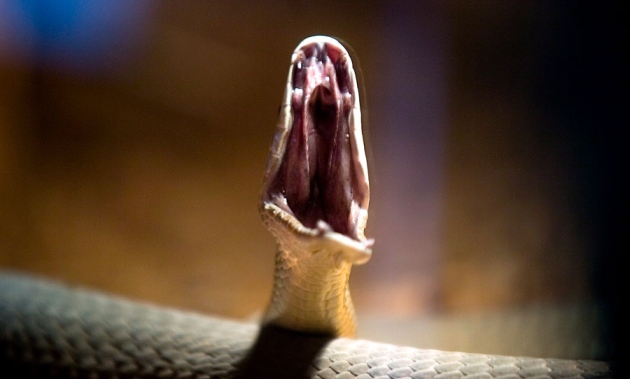 Black mambas have deadly venom containing a mixture of toxins — and two proteins that block pain.

With a series of swift bites, the black mamba injects a toxic cocktail that can kill a human within 20 minutes. But among the compounds that squirt from the snake’s fangs, two proteins can block pain in mice as effectively as morphine — and with fewer side effects, according to a study published today in Nature1.

The snake proteins — called mambalgins — were discovered as part of a search for alternatives to opiate drugs such as morphine. Many patients grow tolerant of opiates, requiring higher doses over time, and the drugs often cause side effects such as nausea, constipation and drug dependency.

“It’s important to try to develop new drugs that can have complementary or different types of action,” says Eric Lingueglia, a molecular physiologist at the Institute of Molecular and Cellular Pharmacology in Valbonne, France. He and his colleagues identified the proteins from the black mamba (Dendroaspis polylepis) after testing about 50 different animal venoms.

The team found that mice injected with mambalgins could withstand hot water on their tails and paws for about twice as long as untreated animals. The snake proteins also reduced hypersensitivity to pain following tissue inflammation. Over 5 days of repeated treatment the mice developed a tolerance for both opiates and mambalgins, but the effect was less pronounced with the snake-venom proteins.

Mambalgins also did not slow the mice's breathing rate, a potentially dangerous side effect of opiods that can complicate their use.

Instead of acting on opioid receptors as morphine does, mambalgins bind and inhibit molecules in the family of acid-sensing ion channels, or ASICs. The ion channels form pores in the membranes of neurons and have been implicated in pain transmission, but their precise role remains poorly understood.

When injected into the mouse brain and spinal cord, mambalgins inhibited subtypes of ASIC different from those inhibited when the proteins were injected into the paw, suggesting that they offer several potential targets for future drug development, says Lingueglia.

He hopes that mambalgins or related molecules will become clinically viable, but this study is only the first step in what would be a long process to get the painkillers onto the market. “This study is done in mice, so the first thing to do is make sure it’s the same as in humans,” he says. Early tests suggest that mambalgins block some human ASICs in vitro.

At least one other venom-based painkiller is already available commercially: Prialt (ziconotide), which mimics the venom of the cone snail (Conus magus). Venom proteins from sea anemones, spiders and scorpions have also been found with potential biomedical uses2.

Richard Lewis, who studies venom therapeutics at the University of Queensland in Brisbane, Australia, says that the finding is exciting. “There’s been very few new drugs to come out to treat pain in the last 10–15 years, and very few new modes of action,” he adds.

“It’s nice they’ve gone the extra mile to show that the side effects there are with opiates like morphine aren’t there,” says Laura Bohn, a pharmacologist at the Scripps Research Institute in Jupiter, Florida. However, she notes that more work is needed to analyse how the snake proteins travel through the body and break down into by-products.

David Julius, a physiologist at the University of California, San Francisco, has studied other snake-venom proteins that activate ASICs3. He says that snakes are a valuable source of new molecules for experimenting on the channels. “These venom sacs are basically evolving combinatorial peptide libraries. There’s some stuff in there that the animal can use,” says Julius, and some “that just turns out to be useful for us”.