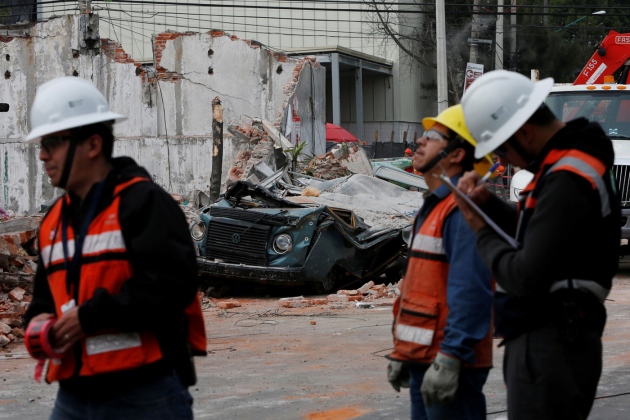 A deadly magnitude-8.2 earthquake struck the southern coast of Mexico on 7 September, killing dozens of people and injuring at least 200. The tremor, which Mexican President Enrique Peña Nieto said was the strongest registered in the past century, prompted mass evacuations along the country's Pacific coast.

Scenes of demolished buildings, teetering streetlight posts and blacked-out subway stations have been circulating on social media. Mexico’s Federal Commission of Electricity calculates that 1.85 million residents across the country were affected by power cuts.

According to the National Seismological Service of Mexico, the quake hit the Gulf of Tehuantepec near the state of Chiapas just before midnight local time. The country’s earthquake early-warning system gave residents anywhere from a few seconds to more than a minute of warning, depending on their proximity to the tremor’s epicentre. In Mexico City, more than 725 kilometres away, that amounted to 86 seconds of advance notice.

Mexico City resident and agronomist Obed Mejía Yáñez was in a 23rd-floor apartment at the moment alarms went off in his building. “I was writing my thesis when it hit. The lights went on and off, and the windows began to crack,” he says. “I said ‘this is it’ and even thought about jumping out the window. I got very scared. I had never felt an earthquake like this.”

Although buildings in the capital suffered some structural damage, the southern states of Oaxaca, Chiapas and Tabasco were the most affected, with more than 30 confirmed deaths. In Oaxaca, patients were evacuated to the streets in hospital beds and several buildings collapsed, including the city hall in Juchitán.

The region where the earthquake struck is one of the most active seismic zones in the country: this is where the Cocos Plate dives, or subducts, under the North American plate. “Earthquakes of this size are not uncommon at subduction zone boundaries,” notes Jascha Polet, a seismologist at California State Polytechnic University in Pomona.

But this quake was different: it occurred within the Cocos plate as it warped or bent, not at the boundary with the North American plate, according to the US Geological Survey.

“The type of faulting that occurred here does not usually produce earthquakes of this magnitude,” says Polet. “There have been others in the past 50 years of similar type and location, but none that was even close to this size.” It is still too early to say why the earthquake was so massive, she adds, but “it is sure to inspire much future research”.

Mexico’s seismology agency has registered at least 337 aftershocks, with the strongest reaching a magnitude of 6.1.