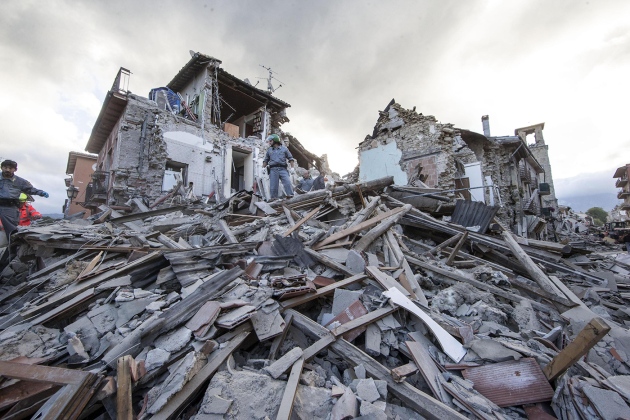 The town of Amatrice in central Italy has been devastated by the earthquake.

This, it later emerged, was the first shock wave of the 6.2-magnitude earthquake in central Italy that has killed dozens of people — and destroyed historic villages and small towns as lovely as the one where I am now staying on holiday. It was a sinister déjà vu — in 2009 I was awoken in Rome by an even more powerful quake — the one that destroyed L'Aquila. The clock stood at 3.33 a.m.

Nature's senior European correspondent Alison Abbott, who was in nearby Tuscania when the earthquake struck this morning, sent over these impressions.

The earthquake, the death toll of which has now risen to 250 according to Italy's civil protection agency, is the strongest in Italy since the devastating magnitude-6.3 earthquake in 2009 near the town of L'Aquila. That event killed about 300 people and destroyed tens of thousands of homes — and, controversially, caused a group of scientists to be put on trial for manslaughter. The shocks in the small hours of this morning have again caused death, destruction and panic, leaving the centre of Amatrice, a town in the Apennine Mountains in central Italy, in ruins.

The mighty Eurasian and African plates, which build the Alps in northern Italy, also collide here. This creates further strain, with the Eurasian plate moving northeast at a rate of 24 millimetres per year.

The latest quake is the outcome of a normal faulting event, and is a result of the east–west movement of the Adria plate under the Apennines occurring faster than the collision of the Eurasian and African plates, according to a preliminary analysis by the US Geological Survey.

Seismologists had expected a rupture to occur near the location of today’s quake at any time. Fitting into a seismic sequence, this morning's shocks occurred in a geographical gap between a series of earthquakes in 1997 some 50 kilometres farther northwest, and the L'Aquila quake in 2009 some 45 kilometres to the southeast. 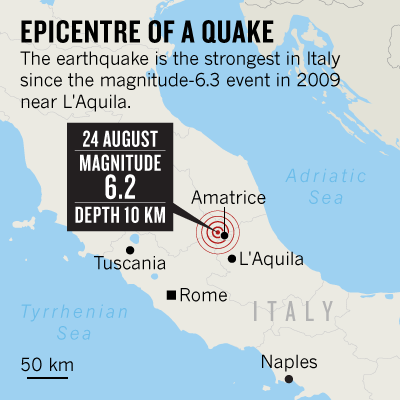 Alessandro Amato, a geologist at Italy's National Institute of Geophysics and Volcanology in Rome, awoke to the shocks from dreaming that someone had knocked wildly at his door. Having done some computer modelling since, he says that there is a risk of severe aftershocks in the next hours or weeks.

“The quake may have activated adjacent faults as happened in 1997,” he says. “We expect a number of aftershocks of decreasing magnitude. But we can't say when and exactly where they will occur.”

Unlike in 2009, there was no seismic activity recorded before today’s quake. Controversy over the significance of alleged precursor tremors to the 2009 quake had legal ramifications. Six scientists and one government official who had publicly dismissed a warning by a local amateur researcher who claimed to have evidence of an imminent large quake were accused of misinforming the public. Following an unprecedented trial of the scientists that drew international attention, they were given six-year jail sentences for manslaughter in 2012, but the scientists were cleared on appeal in 2014.

The 24/7 search for killer quakes

Today's quake, which shares some similarities with the 2009 event, is a continuation of the region's expected tectonic activity. But, says Amato, “predicting earthquakes reliably is but a distant dream”.

No damages were reported at the National Institute of Nuclear Physics’s (INFN’s) laboratories in the area in Frascati near Rome and underground at the Gran Sasso Massif near L’Aquila, says Antonella Varaschin, a spokesperson at the INFN headquarters in Rome.

Further details on the quake are still emerging, and the death toll may continue to rise. The atmosphere in Tuscania is pensive. Abbott says: “Taking a coffee this morning in Tuscania, which was itself extensively damaged by a deadly quake in 1971, the talk was sad, calm, of 'fate'.”

This story is being updated as new details of the event emerge.

This story originally called 'normal faulting' — which is a specific type of seismic activity — a 'typical faulting event'. It has since been changed.